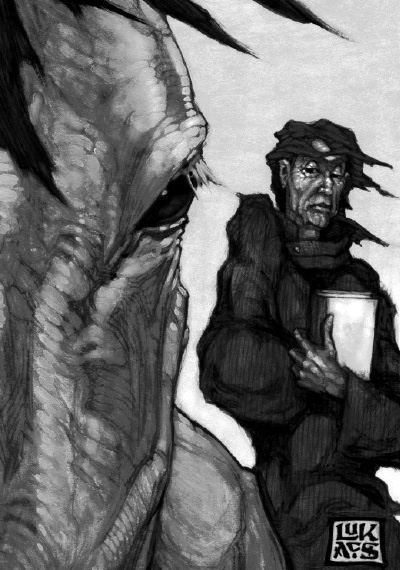 That night Morlock Ambrosius dreamed of silence as a pool lapping at his feet, in which he watched the world slowly dissolving in a golden glare. He woke up with the sun in his face and an uneasy feeling in his mind.

He decided, as he sponged himself off at the basin of his rented room, that his dream meant that he had spent too much time in the sleepy little forest town of Aithonford, and that he needed a city full of noise and smoke and voices. Narkunden, not too many days ride to the south, might do. After dressing, he stowed his belongings in his pack, slung it over his crooked shoulders and went downstairs.

“Master Bunden,” he said, on meeting his landlord, whose cheerful face fell when he saw what Morlock was carrying.

“Ach,” the little man said disconsolately, “I guess you’ll be leaving us, Master Morlock. This is sudden.”

Morlock nodded. “I must go. But I may return. Maybe you’ll hold my room for six months or so? I’ll pay you.”

Bunden nodded, but not cheerfully. “Sure, sure — we’ve always got an empty room, as you know, and the gold’ll be appreciated. But gold doesn’t talk to you.”

Neither did Morlock, much, so he hefted his saddle from a hook by the door and went out back to fetch his horse from the stable. He was struck, as he went, by the thought that Bunden was fond of him. It meant little, perhaps: Bunden had a capacity for being fond of people. When he found that his brother Handen was sleeping with his wife, Rella, he simply divorced her, stood up at her wedding to his brother, and gave both of them jobs at his inn. “I thought about killing them,” the little man confided to Morlock (not without confidence: he was also one of the town blacksmiths), “but… I’d miss seeing them around.” So it probably meant little that he would miss Morlock, after a few nights of trading stories among several months of mostly silent coexistence.

These thoughts were driven out of Morlock’s mind when he rounded the smithy attached to the inn, and found that the stable had vanished. His horse, Velox was there, disdainfully cropping some of the weed-thick grass of the empty field, but there was no stable, no fodder troughs, nothing. Morlock crouched down to examine the ground, rose again thoughtfully a few minutes later. In his opinion, this ground had never been levelled for building. Yet, last night, there had been a stable here, the largest in town.

Velox, his horse (a black, somewhat middle-aged warhorse with sarcastic gray eyes), trotted up and snorted at him. Morlock grunted and patted him on the neck. Then he led him around the front of the house and went in. “Master Bunden,” he said, stepping into the dimness of the common room. “Your stable is missing.”

“Your pardon, Handen,” Morlock said. “I didn’t know you from your brother in the dark. I suppose he is in he smithy by now.”

“I don’t have any brother and this inn doesn’t have any stable — or a smithy,” Handen replied irritably. “Are you sure you’re at the right place? Maybe you got drunk last night and came back to the wrong inn.”

Morlock, beginning to find the conversation tiresome, stepped outside to confirm Handen’s remark about the smithy. It was, in fact, gone. A pine tree at least forty years old was towering where the smithy had been a few moments before. He was unsurprised to find Handen missing on his return. He ran into Rella, just outside the common room and began, without much hope, “Ma’am, I was just speaking to your husband — ”

Rella laughed the infectious laugh that had so appealed to Bunden and his brother, while they still existed. “Bless me, Master Morlock, someone has been teasing you. I’ve no husband.” Morlock watched with some interest as one of her eyes disappeared, congealing like a small puddle in the hot sun. “Who’d marry a one-eyed woman like me?” she continued without pause. Her other eye disappeared. “Nevertheless, this blind old woman will be sorry to see you go, if you catch my meaning.”

“Farewell, then, Ma’am,” said Morlock, more swiftly than was strictly courteous. He wanted to say goodbye before Rella’s ears disappeared, which they had begun to do before he turned away.

Once outside he shifted the pack from his back to Velox’s, saddled the horse and rode away: away from a shadow-etched plot of green, a patch of uncleared forest in the heart of the little town.

Bunden’s place was not the only one affected by whatever was happening to Aithonford: all through the town there were vacant lots that had not been vacant the day before. In some places the vacancies themselves had disappeared, pulling two buildings that were not adjacent next to each other, giving the town’s main street a strangely wrinkled, puckered look.

Morlock reined Velox in by the other inn (now the only inn) in Aithonford. When the postboy came up to take his horse, Morlock did not dismount, but said, “Fellow, listen. Isn’t there a sorcerer who lives nearby? A sorcerer in the woods?”

The postboy hesitated. “I’m not supposed to say…” he began. He never finished.

Morlock shrugged his wry shoulders and rode away from the empty place where the post-boy had been. At least he knew now that his suspicions were correct: there was (or had been at one time) a sorcerer living nearby. It wasn’t surprising that no one had mentioned it to him before: he was not so intimate with anyone in town that they would let him into their deeper confidence. Sorcerers, especially solitary adepts, were bad neighbors, as a rule — nothing to brag about.

He rode on to the end of the main street, where some boys were taking turns kicking a leather ball into a man-shaped wooden target which bore more than a passing resemblance to the town jailer. The resemblance was due to Morlock himself, who had recarved the thing’s face after a brief stay in the town lockup. The boys had been delighted, and Morlock felt it had won him some credit with them, so he called, “Hey, boys.”

He reached into a pocket and drew forth a handful of gold. “I have here a gold coin for each of you.”

He owned their attention absolutely. Gold coins were not often seen in Aithonford. “And two,” he said, “for the first one who tells me how to reach the sorcerer’s house.”

Hardly a heartbeat passed before one sang out, “Cross the Aithon at the ford, follow the main path to the fire-split oak; north on the sign road about a mile.”

Morlock tossed the coins accurately and they snapped them out of the air like toads catching flies. He waved his hand curtly and rode away to the ford. If they vanished, he didn’t want to see it. He forded the shining blue river Aithon and dismounted on the far side. The dim green woods came straight up to the river’s edge, and he didn’t know whether there was clearance for a rider on the path. “A bad day is rarely improved by a branch clonking you on the head,” he remarked epigrammatically to Velox, who snorted.

The fire-split oak was easy to find, and the way north (evidently the “sign road”) was just by it. Nonetheless, Morlock hesitated there. Under the oak was a sleeping man, his head pillowed on a book, and Morlock was inclined to wake him and speak to him. But it seemed unlikely he was the sorcerer: his ragged clothing marked him as one of the lesser lights of the town, perhaps a beggar who lived in the woods. Morlock didn’t know the man, but there was something familiar about him… He shook his head and turned up the sign road.

As a road it wasn’t much, but the reason for the name soon became clear. Every two hundred paces or so the path took a jagged turn to the left or right, and at every turn was a sign.

You approach the home of
FLEGYAS THE MAGICIAN.
Go back.

You are nearer the dwelling of
FLEGYAS THE MAGICIAN.
Your danger increases.

Why do you defy the kindly warnings of
FLEGYAS THE MAGICIAN?
Does your life mean nothing to you?

Everyone’s death has a dwelling place.
FLEGYAS THE MAGICIAN
dwells with yours.

Beyond this final warning lives
FLEGYAS THE MAGICIAN.
Beware of the phoenix.

“Do you suppose he really has a phoenix?” Morlock asked Velox, whose silvery gray eyes, fixed on the sign, gave every indication of concern. For once Velox did not snort in answer, and Morlock, shifting the reins to his left hand, drew his sword with his right before leading Velox onward.

They advanced up the overgrown path toward a lean high house now visible through the trees. The windows were all shuttered and no light showed through the cracks. Morlock walked up to the door at the end of the cluttered path and rapped on it.

“Flegyas!” he called, sheathing his sword. “I am Morlock Ambrosius. I’ve been staying at Aithonford. I want some words with you. Flegyas, awake!”

There was no answer. Morlock, glancing about, was not surprised. The mushroom garden had overgrown its borders, perhaps years ago. Morlock doubted that the dread FLEGYAS THE MAGICIAN was still in residence. (It turned out he was wrong about this.) Still, there might be some clue within as to what was causing the vanishings at Aithonford, and Morlock determined to enter. The door was plain wood, unprotected by anything except a very weak residual spell to prevent fire, so Morlock simply kicked it in.

The clouds of dust within seemed to confirm Morlock’s suspicions. Glancing back, he saw Velox nervously peering at him through the open door.

“You’d better come in,” he said grudgingly to the horse. “We don’t want you eaten by wild phoenixes.”

The horse gratefully squeezed through the narrow doorway and immediately began to sneeze. Morlock retreated hastily out of the range of flying horse snot, and tripped over something shrouded in the deep dust of the floor. As he rose he saw that it was a long-dead body, clutching a large book in its crisp dry hands. The mummified flesh had been torn about the heart with something like a triple claw; similar claw prints, painted in brown blood, adorned the cover of the book and the nearby floor.

“Poor old Flegyas,” Morlock remarked to the dead body. “You may or may not have had a phoenix. But it looks as if a phoenix had you.”

The complete version of “A Book of Silences” appears in Black Gate 10.