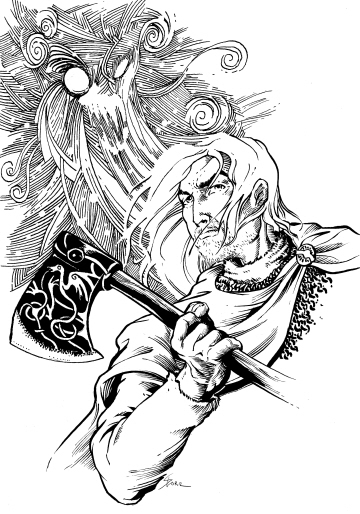 Clouds buried the setting sun and brought on the night, starless and heavy as a shroud. Swein the spearman and I volunteered to keep watch while the others took their rest. None of my shipmates seemed eager to bed down. Swein stood watch in the stern while I sat on the gunwale by the prow, looking down on Halfdan as he worked beside the fire. The others followed the prince’s example and wrapped themselves in their cloaks before stretching out in the knarr’s belly. I heard no snores.

After a time Swein came, sat near me with his spear across his knees, and rubbed his scarred brow. Halfdan noticed him and spoke.

“He did, though if you speak to him of it now his face will grow long as an oar.”

“I wouldn’t think his face could grow longer than I saw it today.”

“Mention his silver and see for yourself. It has disappeared.”

Halfdan’s thick eyebrows rose. “How did this happen?”

“We think it was the demon. Mord kept the silver in a chest in the longhouse and one day he thought to admire it and found it gone.”

“And then he began to find his people gone as well. Stay alert, you two.” The graybeard kicked at the fire and looked into the dark. “Brand, where’s your ax?”

I held up my weapon. Halfdan had given it to me after I lost mine in the battle to reclaim Asdis.

I didn’t know it had a name. In the dim firelight I saw the iron ax was reinforced along its edge with stronger metal, and that fading whorls glistened where silver wire had been hammered into the blade.

“What?” I looked up from Halfdan’s gift.

“There.” The spearman pointed, but I saw nothing. “They’re gone.”

Something came whirling out of the night in a cloud of dark spray, arcing down from well over our heads to splash directly onto the fire. There was a ghastly hiss as smoke and steam exploded from the smothered blaze.

“Is that it?” I cried foolishly. After the light of the fire, the darkness was like a blindfold.

Swein turned and called to my shipmates while Halfdan and I stared into the vast night. Nothing moved.

Coals glowed sullen crimson as Halfdan thrust his spear into the smoking corpse and began to drag it from the fire. I saw it had been eviscerated, ripped open from jaw to tail.

I heard the rattle of stones, swift footfalls coming out of the dark.

Something horribly fast struck the old man from behind. He staggered through the coals, kicking up smoke and sparks, and fell. My shipmates were awake and a cry rose from them. I saw something impossibly elongated and thin, like a moving spear shaft, silhouetted against the embers. And eyes. Two yellow-white bowls of mist, each as big as a man’s clenched fist, bobbed over Halfdan’s prone body as if on a pole.

Swein yelled in wordless defiance, throwing himself forward to lean over the gunwale beside me and thrust with his spear. Something black and spider-like lit on Swein’s shoulder and wrenched him over the side with such force his boot hit my elbow as he flew past. I stepped on the gunwale, lifted Neckbiter, and vaulted after him. I hit the ground hard and gravel turned beneath my boots so that I fell heavily.

I could see nothing but darkness aswirl with smoke, but my ears were full of the shouts of Asbjorn’s men and the terrible high-pitched screaming of Swein. I leapt up, but couldn’t feel the demon anywhere near me.

“There!” rasped Halfdan, on his belly beside the smothered fire, pointing.

I turned and saw, on a rise forty feet away from where it had stood an instant ago, the demon’s eyes glowing like pale witchfire in the night. Those eyes were formed to see in the darkest hell, and they looked right at me. They turned away and Swein gave a despairing howl that stabbed my belly like a dagger of cold iron. It was taking him like a fox takes a mouse.

“No!” I heard myself yell, and ran after them. The knarr and the voices of my shipmates fell away as I ran heedlessly into the dark. I thought I could hear the crunch of the demon’s feet on the stones, but when Swein cried out again he was much farther away. His fate and my helplessness combined to madden me and I ran with no thought of preserving my strength or of what I might do if I was somehow to catch them.

I went over a rise and down a long, rocky slope with my lungs burning. A sheer cliff rose before me, towering against the starless sky. There was another scream, but it was fainter now and seemed to echo, as if Swein had fallen into the earth. Gasping, I slid to a halt at the threshold of a portal into utter darkness. Here, at the base of one of the island’s titanic bulwarks of stone, was the mouth of a cave. I hesitated, sweat burning my eyes, and stared into a blackness like that of death.

From somewhere deep within the cliff, a shrill scream rose, quavered, and faded to silence. I shuddered, the heat of my run dispelled by a frozen horror. I opened my mouth to call, but no words came forth.

Stones rattled and I turned to see Halfdan coming down the slope with others not far behind, at least one bearing a torch. The graybeard came and stood with me beside the cavern’s black mouth.

“It killed Swein,” I told him, and my voice faltered.

“He rushed to fight a foe who slew his kinsmen. He died as a warrior dies and he did so knowing we shall avenge him,” said Halfdan.

Asbjorn joined us, with the others at his heels.

The prince spoke. “Mord was right about its lair. The demon bore its prey down into this sea-cave. Did you see it, Brand?”

“Only the eyes,” I said, still panting. “It was too fast and too dark.”

“Let us repair the knarr and leave this cursed place!” cried Bolverk. I could tell he regretted saying it as soon as it was spoken, but I could also tell that most of us wanted to do just as he suggested.

“I’ll not suffer such a thing to prey on my father’s men,” said Asbjorn. “We shall kill it.”

“Yes,” said Halfdan. His smile was that of a wolf.

The complete version of “The Bonestealer’s Mirror” appears in Black Gate 14.