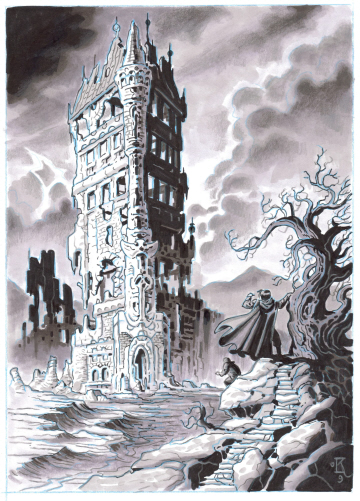 A mile farther and the way forked. One branch went on parallel to the river while the other went over on a timber span. They crossed and continued south.

The woodland on the far side was dense with oak, fir, pine and groundcover. For half-a-league. Then before them was an expanse of bare granite that extended for miles.

“What unrelenting desolation!” remarked Folie. “Not a stem or leaf to be seen.”

“Does this wasteland have a name?”

“I’ve never been this far south before.”

Soon they were poised on the lip of a depression in the rock landscape. In this hollow, some distance off to their left, was a mansion whose middle section had fallen in.

“The lords of this demesne,” observed Folie wryly, “must receive their rent in gravel and scorpions.”

“Can their hospitality be worse than that?” Rhing said, motioning toward the roiling darkness and webs of lightning filling the horizon to their right.

No other feature of the landscape offered shelter, thus they agreed to take their chances on the ruin and whomever might dwell there.

The house, he soon observed, lacked outbuildings. There was not so much as a rude lean-to stable. And when nearer, Rhing saw that the main portion had not collapsed but been crushed by some colossal impact.

“Ah, to command a spell that powerful!”

Both wings of the oak and fieldstone mansion leaned perceptibly toward the center, and those parts nearest cave-in displayed cracks and small fissures.

After chanting and making a pass, Folie said, “I detect residual energy from an old spell, but no guardian wards or warnings.”

“We have not been hailed or challenged. I see no smoke rising from a chimney.” Rhing was even more heartened by his charm’s failure to react. The enchanted weapon had never failed him.

They increased their pace as the breeze freshened. Then Folie said: “It appears an utter derelict. But… have you noticed that its lead roofs are intact? And there is still glass in the windows.”

“The local scavengers are a lazy or superstitious lot…?”

“Or… there is a fearful curse at work here.”

Rhing had been pushing away that very possibility.

They heard raindrops splattering on the naked rock even before they were overtaken. And now they ran.

We might try a libation or burnt offerings to the lares and penates, he told himself. Even before the thought was done, Rhing knew he was more serious than sardonic.

The door farthest from the broken center opened without complaint, admitting them to a gallery that stretched the width of the house. By dimming sunlight and the glare of lightning he saw furniture, arrays and drapes, and floor matting.

“Our luck continues!” cried Folie. “There’s a basket of firewood!”

Rhing filled his clay pipe and paced the room, with a feeling of eeriness as a shadow. There were no cobwebs, there was no dust – though it ought to be as thick as fur. The room smelled faintly of lavender, lamp oil and wax, not damp, mold or decay. And the windows, despite the furious downpour, did not rattle or admit a draft.

Then, when he stopped at the hearth for a spill to light his pipe, his mind tried a fresh tangent: “Would you sense a beguilement spell?”

Folie shot him an incredulous look. “You feel captivated by this pile?”

“Fascinated. Intrigued.” He mentioned all the things he’d noticed.

“My best guess is that there is a spell in force here that’s holding time at bay. But we are not trapped in it, otherwise the firewood would not start.”

Rhing felt a chill race through his veins. It had not occurred to him that they might be caught and fixed in time, like ants in amber. He doubted his charm had the magic to warn him.

“You might test it by opening the door.” Folie smiled, but there was fear in his eyes.

That’s how he faces down fear, Rhing thought on his way to the door.

A sheet of rainwater greeted him. In an instant his front was even wetter than his back. But when he closed the door and looked down, he could see that the floor matting was dry.

Rhing leaned against the wall to steady himself. Here was power beyond his comprehension. A magical working that both thrilled and menaced him. And all the while the charm remained unaffected.

“I wonder if the spell has preserved the larder?”

Reminded of his own hunger, Rhing said, “I’ll light a lamp and we can explore. The kitchen stair may have survived the collapse.”

The rooms on either side of the passage were as tidy and finely appointed as showroom displays, he observed, or museum dioramas.

The corridor ended where the traverse wall had buckled and pulled down the ceiling. Unlike Folie, Rhing could not detect the spell-energy clinging to the wreckage. He nevertheless remarked the singular manner in which magic kept the swirling wind and lashing rain from entering through cracked walls and burst windows. Kept the house timbers from flexing and binding, or any draft from harrying his lamp’s flame.

“We could try around back,” said Folie without enthusiasm, giving the debris a kick.

Having lost his appetite for what they might find in the pantry, Rhing said, “I can contribute four ounces of ewe cheese and several poppy seed cakes.”

“And I’m willing to share an apple, two hard boiled eggs, and part of a dry sausage.”

“Today and tomorrow, if you ration carefully.” The prospect pained them both, but there was no dissent. When necessary, as now, both had gotten by on less.

Then matters grew even darker. Once they’d returned to the gallery and Rhing was snuffing his bronze lamp, he noticed that it was engraved with the Renshaw device of three crows dancing on the hub of a circle.

“Master Delemy wouldn’t have blundered in here,” groaned Folie, snatching up his kit. “He’d have read the signs.”

“You are the apprentice not the master…”

They both felt the prick and pinch of anxiety, and were a bit wobbly. But standing at the door, packs in hand, they paused. Outside rain was pelting down, wind was swirling and flailing. Crackling lightning stabbed randomly at the bleak, hard wet plain.

“No shelter or windbreaks out there,” he said, letting go of the door handle.

“Ten steps and we’d be half-drowned…”

They turned and looked at the fireplace, where tongues of flame harmonized.

“A pity to squander your handiwork…” he said.

“We are only staying the one night…”

Then it came to Rhing: “Think again! If all Renshaw property was forfeited to the crown, they no longer have any ownership rights. It’s probable they are forbidden to enter this house.”

Folie grinned and patted him on the back. “Well reasoned! Even so, let’s also give luck a vote.”

Whereupon he flipped two coins in the air and declared: “Even!”

When he won, the apprentice chirped, “We stay!”

“I’d have said the exact same if the coins had come up odd.”

Folie, threatened with disappointment, aimed a sulky look at Rhing. “You aren’t going to start nitpicking, are you?”

“No; we both think it was fairly done, so it’s decided.” Still, Rhing was not easy on the elegant brocade couch until he held the dagger charm. If danger came to call, he would not be taken unawares.

The complete version of “Folie and Null” appears in Black Gate 14.