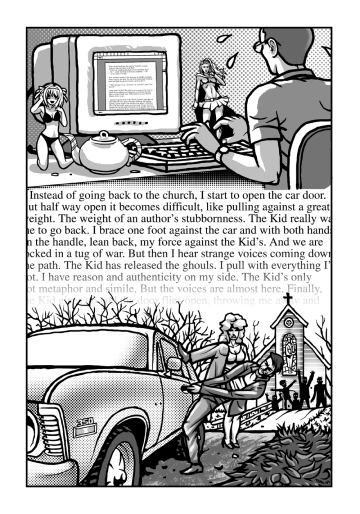 The navigation console exploded in a blinding light, and a shower of phosphorescent sparks spread out into the farthest corners of the space ship’s control deck. The ship rocked violently. We were all thrown helplessly across the floor.

A little too much action.

He must have thought so too.

The navigation console erupted in flames, bright sparks spewing like a fountain. Two of the crew staggered across the rocking deck to put the fire out.

Better. Not great. But better.

I guess I was the captain, standing gallantly and heroically in the middle of the burning deck, saying captainy things like, “Secure sections D and G!” and “Ready all forward weapons!”

Trite, but I’m patient. Let’s see what he’s got in mind. I think it’s a he. Women aren’t usually into writing this kind of space opera. And the evidence for the masculine view point was mounting by the second.

The first officer was a real babe. A lithesome brunette. No, a voluptuous blonde. She stumbled across the unsteady deck. No, she negotiated the unsteady deck with great poise and balance. From the time she left her console, her miniskirt had shortened by several inches and her breasts increased at least one cup size.

She threw one arm around my shoulders and laid her head on my chest. I wanted to hold her close to me, but it didn’t seem right. Of course it wasn’t right. It was absurd. There was still a chance to save the ship. An officer would never leave her post at a time like this.

“I just wanted to tell you that I’ve always loved you,” she said, her big doe eyes looking lovingly into mine.

This guy may really be 13. Hey, Kid, you can change this, you know. You’ve already changed my epaulet color three times. Just make your characters act like real people. But no luck. The first officer and I kiss passionately, oblivious to the sparking consoles and panicking crew.

Okay, Kid, where do we go from here?

The blonde and I continue to go at it, soon to approach the longest kiss ever in a science fiction story. From my end, this is certainly enjoyable. But I keep expecting something else to happen. But it doesn’t.

The Kid must be stumped. I don’t blame him. Wrote himself into a corner with nowhere to go.

Yup! The scene begins to fade to white, and we all slowly disappear. I used to really hate this part. Back in the days of paper ripped violently out of a typewriter the crumpled ball was heaved with frustration through the air in the general direction of the waste basket. I was nauseated for hours. Now it’s not so bad. You just get deleted. Maybe the insult of being discarded is just as bitter, but at least the act itself is easier. And a lot quicker.

Somewhere a single anguished finger had simply touched a single waiting key, and we were all going, going, gone.

The desert stretched red and dry and unforgiving, a barrier to all who would challenge the mountains that held the great secret.

Christ, this better be good.

I rode a horse. A giant, black, head-rearing, nostril-flaring warrior horse, which was appropriate because I was a warrior too. I sat tall in the saddle, huge muscles wet with perspiration and glistening in the hot sun. Not bad. But go easy on the quadriceps, Kid. Bodybuilders need symmetry as well as mass.

Except for the hills in front of me, the horizons were fuzzy and indistinct. Sandstorms? Maybe. But I suspect young Shakespeare just hadn’t thought that part through.

As I approached the high ground, strange creatures appeared all along the ridge. Centaurs of some type, their legs goat-like and very hairy. Two arms, both terminating in jagged claws. Hideous faces. Devil eyes.

I need some weapons, Kid. And suddenly a gladius is in a sheath hanging from my belt. Then in my right hand I’m holding a battle ax. No, a broad sword. That’ll do.

I ride closer, showing my great courage. These things clearly mean business, but first one of them breaks rank and gallops down toward me, stopping an appropriately diplomatic distance away. Okay, Kid, this might work.

I keep that open as a possibility until the creature starts to speak.

“You obtrude to our cordillera as a perquisitor?” it says. I try to decipher that when I hear myself responding.

What the hell is this all about?

The creature nervously stamps its four feet, sort of trotting in place. Drool hangs elastically from the corner of its mouth.

“Our diadem is preponderate,” the thing says. “Plenipotentiary to you.”

Plenipotentiary? You’ve got to be kidding.

And then it hit me. The Kid got a thesaurus for his birthday. Yup. Seen it before. Doesn’t he know the rule about using a new word 10 times in conversation before daring to use it in print?

“Ratiocinate on our puissance,” the creature warned. “Rue your ineluctable reticularity.”

I guess he doesn’t.

This can’t go on much longer. I feel like a complete fool. And my mouth is getting tired from all these syllables. And then mercifully the beast starts to stutter. Then I am suddenly speechless too. Thank God. Never has the thought of deletion been so welcome. The quiet. The whiteness. The lack of reticularity. Oh, Kid, hit the key. Please. Thank you.

Don’t worry kid. It happens to them all at one time or another. Writer’s block is a bitch. You did good to come back so soon. So what do you have in mind today?

Running down a dirt road by a cemetery. The woman stumbles. I pull her up, and we run some more. It looks like we are running away from a darkened church. Not exactly original, but maybe he can do something with it. The woman is another babe, and we must have just narrowly escaped from the band of vampires — no, now they are ghouls — that are watching us from the churchyard, their arms raised toward us and their hollowed eyes hungrily following us. The ghouls must be blocked by the hallowed ground. So we are safe. But then I don’t believe what I hear myself saying.

“I have to go back into the church,” I tell my woman.

And just why do I have to do that?

“I left your wedding ring back on the sacrificial altar” — No “…under the book of demonic prophesy” — No “…in the statue’s mouth.”

Kid, it doesn’t matter if the ring was in a FedEx envelope ready to go by the door. No one in his right mind would go back and fight the ghoul creatures again to get it.

Okay, that’s it, Kid. This time you’ve gone too far. You’ve heard about making your characters so realistic that they take on a life of their own. Well, hold on to your Writers Market. Here we go.

Instead of going back to the church, I start to open the car door. But half way open it becomes difficult, like pulling against a great weight. The weight of an author’s stubbornness. The Kid really wants me to go back. I brace one foot against the car and with both hands on the handle, lean back, my force against the Kid’s. And we are locked in a tug of war. But then I hear strange voices coming down the path. The Kid has released the ghouls. I pull with everything I’ve got. I have reason and authenticity on my side. The Kid’s only got metaphor and simile. But the voices are almost here. Finally, the Kid gives up and the door flies open, throwing me away and to the ground.

“Get in,” I say to my woman, using my own words. I jump in after her. The car starts right up with the slightest turn of the key. I guess the Kid wasn’t paying attention. And we peel out, getting away safely. Ha! We were halfway into town before we faded away.

The complete version of “Building Character” appears in Black Gate 14.