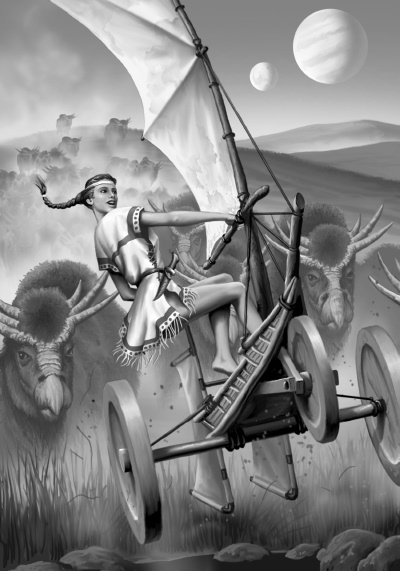 Kris tucked the braided leather catch-rope between her teeth so she could release both backwheel brakes at the same time. Then she gave it a tug. The three’s sails cracked open in the freshening wind and she surged forward.

With one hand on the rudder she stood tall in the saddle. The grass was high on the lee side of the hill. The herd was off to her right, and behind her were the hunters, trusting her to do her job as outrider, to swing around and back, make the herd hesitate so the hunters could strike.

Kris cushioned the bumps and shudders with flexed legs. The wind picked up against her face, and once again she breathed deep to settle her heart, which pounded as fiercely as her wheels against the plain.

All she had to do was…tack. Ducking low, as her tiny three offered nowhere else to stand when the boom changed sides, Kris threw the rudder over and leaned hard to avoid tipping. One wheel came off the ground, but she made the turn, grass whipping her braided hair as it hung low behind her. Gaining her point, Kris settled back and stood tall again. Perfect.

The wind was right. The hunters would reap a fine harvest this day, she thought to herself.

“Don’t forget the herd,” she muttered. For though an outrider could make a herd hesitate, once the hunters pounced in their fours and sixes, it would scatter, and move toward the lesser threat. More than one wind wagon had been brought down by rampaging maggies.

More than one outrider trampled, Kris couldn’t help but remember, under a maggie’s six plate-like hooves.

The herd became aware of her. Heads shot up from the tall grass. Bass rumbles erupted, maggie alarm going from one bull to the next. They shuffled, and a few began to run.

Even those few made a faint thunder on the wind.

“Hey! Hola! Bugga-Wugga!” Kris shouted. It seemed her voice was torn away by the wind, but the maggies heard and turned away. To the hunters. As she thumped up a slight crest she adjusted her rudder to give her a moment of height. In the distance she saw the hunter’s masts suddenly blossom with sail.

Late! They were late! Kris seated herself, eyed the ground to her left. If she could keep up her speed she might manage a turn….

And end up in the herd’s path, running before the wind, should she fail.

Seeing no pond or mire in her path, she ducked and leaned again. This time her three leaned even further, and Kris tasted copper fear as the tops of the tall grass whipped her face.

The three settled back down. Now angling slightly away from the maggies, she heard bass alarm from the bulls and slightly higher tones of panic from the females. The hunters were among them. Now they would begin thundering away from the real threat.

Rampaging toward her and her wagon, Kris knew. Standing tall, she looked back and to the left. Maggies surging into a gallop darkened the plain. For now, Kris couldn’t see the far edge, the thinning of the herd that meant safety. Wind wagons were necessary to hunt the great beasts, for maggies moved quickly upon the plain. But even the wind, Kris knew, wasn’t fast enough to outpace a running maggie, much less a panicked herd.

A chuckhole larger than most thumped loudly, and Kris automatically checked her axles and wheels. Then she turned a bit to give herself a better angle of escape. The maggies continued to surge forward.

At the rear of the herd, the hunters were doing their work, harvesting meat, hide, all the necessaries for life on the plains. Kris gritted her teeth. She was an outrider, she told others, because her father and mother had been outriders, but the truth was she had no stomach for such slaughter. But to ride the wind meant hunting, unless one became an outrider, solitary scout.

Shaking her head, Kris forced herself to look again at the herd. The faster maggies were already streaking ahead of the dark wave, and soon she would have to dodge them. A collision would mean death when the rest of the maggies came and stomped everything flat, and then Kris would be just another careless outrider, a name quickly forgotten around the dung fires that burned when the wagons were drawn up into a great circle for the night.

Her stomach tightened, then began to feel as if she’d eaten a stone that morning. She wasn’t going to make it. By turning she’d given the hunters the necessary opening, but the herd was spreading out. There was no way she could reach the far edge and escape the maggies.

“Spit,” she said then, her mother’s favorite word for unfortunate circumstances, and looked ahead and off her beam. Salvation? She steered away from the herd, losing part of her wind, but there was no helping it. Her three slowed. The bumps became substantial jolts as she was no longer partially flying over the chuckholes. Her three couldn’t take too much rough treatment, she knew. It was old and patched.

Kris gritted her teeth. With a portion of each hunter’s take hers by outrider right, she could barter with the crafters for work that would make the three solid and dependable again. If she lived to collect it.

A panicked maggie drifted by on her right, keeping its distance. Kris could almost pick out the complicated syncopation that was a maggie at the gallop from the thunder of the herd closing quickly behind her. In minutes she would be overtaken. She would have to tack back and hope the downslope was enough….

Kris crested a ridge and became airborne. It was dangerous in a three, exhilarating in a four, and she found herself enjoying the floating feeling. She didn’t move the rudder: to do so would mean a spill when she landed.

With a huge jolt the three settled back with creaks and snaps. A disturbing noise from her left rear wheel merited a look under most circumstances, but not just —

Kris threw the rudder over and leaned. The three groaned in complaint, but it turned. Grass once again whipped her face. Before the three had fully settled, Kris pulled herself back to center and loosed the mast-rope. Her sails emptied in a moment, falling over her like a blanket.

Thunder. Maggies bass voices booming alarm. The ground shook. Kris worked her way out from under her sails. She would be a laughingstock, she knew. But as the herd split to go around the pond her three was settling into, Kris knew she would be a living laughingstock.

“And that,” Kris quoted her dead parents, “is one way not to be a dead outrider if you get caught in front of a herd.”

The complete version of “Before the Wind” appears in Black Gate 10.

One thought on “Fiction Except: “Before the Wind””