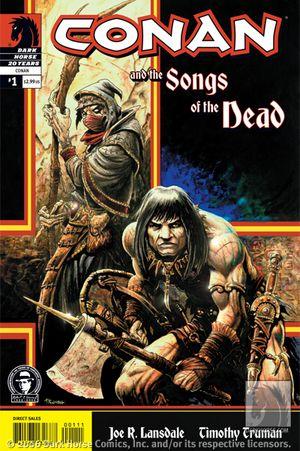 The opening scene in the first issue of Conan: Songs of the Dead, in which the big Cimmerian chases down a wild dog and eats it raw, lets you know that this is not your father’s Conan comic books series. This is hardly the sort of goings on one would have expected within the four-color pages of Marvel Comics’ long running Conan the Barbarian series.

Songs of the Dead is a five-issue limited series from Dark Horse Comics, publishers of the monthly Conan comic book. The series is written by novelist Joe R. Lansdale, and features artwork by fan-favorite Timothy Truman.

Lansdale has written more than twenty books. His fiction runs the gamut from horror to Westerns to crime fiction, along with books that defy easy genre classification. He probably is best known as the author of the Hap Collins series of crime/suspense novels, which includes titles such as “Savage Season,” “Mucho Mojo” and “Two-Bear Mambo.” 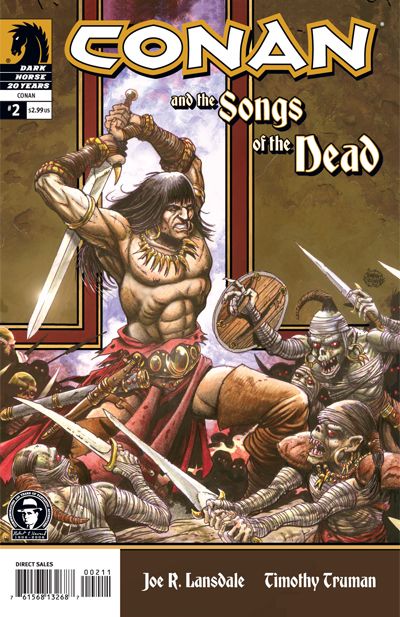 Now Lansdale brings his unique brand of ‘mojo storytelling’ to the adventures of Robert E. Howard’s most famous creation, Conan the Cimmerian. Unlike many writers who have tried their hands at writing Conan’s adventures, Lansdale isn’t interested in trying to reproduce the storytelling voice of Robert E. Howard. The dialogue in the first two issues, which is humorous and hard-boiled, lets you know that things are firmly in Lansdale territory.

The story follows Conan into the Stygian desert, where he encounters an old comrade, the roguish Alvazar. Alvazar has run afoul of some priests of the snake god Set, who wish to kill him for the theft of a holy artifact, the Demon Root. Conan gets involved and soon finds himself accompanying Alvazar on a quest that will lead to a strange temple, a seductive female ghost and a horde of flesh-hungry zombies.

Lansdale’s Conan is rough-hewn, with an earthy sense of humor that may surprise longtime fans of the character. But don’t worry. This Conan is as quick-tempered and ready to fight as any previous incarnation. There’s enough action in the first two issues to warm the heart of any sword & sorcery fan. Timothy Truman, who also is the current writer of the monthly Dark Horse Comics Conan, turns in a powerful, gritty art job on Songs of the Dead. Truman, probably best known for his work on First Comic’s Grimjack, is a natural for drawing Conan. His art is dark and forceful, as befits a horror-filled story like this one. He excels at drawing evil sorcerers, dark chambers and vengeful zombies.

Truman’s version of Conan is brawny, yet believable. He looks like a man who has lived a rough life and is ready for whatever comes next. Truman is one of those artists whose work manages to be over the top and down to earth at the same time. His characters seem real no matter how outlandish the situation.

Truman, a major fan of Robert E. Howard, had told Dark Horse he would be interested in doing a Conan fill-in issue or mini-series. He was surprised to find that he was on the short list of possible replacements for departing writer Kurt Busiek. Now Truman is writing the monthly series, with artist Cary Nord providing the visuals.

Lansdale and Truman have worked together before on comics projects (See the interview with Lansdale that accompanies this article for more about their collaborations), including a Lone Ranger mini-series for Topps Comics, and two Jonah Hex series for DC Comics. The two collaborate well, almost to the point where the story and art seem to be the work of one person. They are working at the top of their respective forms in Songs of the Dead.

The last of the five issues of Songs of the Dead is due in November. Check this series out. 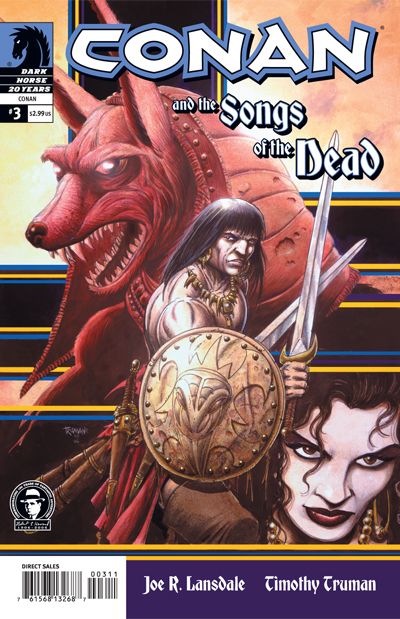 An Interview with Joe R. Lansdale

The best place to start is at the beginning, I suppose. How did you get involved with writing “Songs of the Dead” for Dark Horse?

I worked for Dark Horse years ago. I finished a Tarzan novel Edgar Rice Burroughs had left unfinished. It was called Tarzan’s Lost Adventure. The real Burroughs fans weren’t as happy with it as my fans were, but I loved doing it. I love Burroughs and Tarzan, and thought I did a fun job. I tried to capture Burroughs and also bring something of myself to the work. I also had some works of mine adapted at Dark Horse, a number of which have been redone recently by Avatar Press. I also did Dead in the West, adapted by Neal Barrett Jr. and the late Jack Jackson. We had discussed other work then, and I recently agreed to do the Conan series, as well as some other items.

You recently did the introduction for a Robert E. Howard collection called “People of the Dark.” Could you tell us a bit about how you first discovered Howard’s work?

I love Howard more for being a Texan in a small town and making a living using his own wits than I do for the work. That’s not to say I don’t love a lot of the work. I do. I think he’s a Texas Jack London. His best work is powerful and primal and pulls you inside the worlds he creates. I discovered him about the time I graduated from high school and was starting college. I may have read something before then, and just didn’t associate it with Howard. I think it was a collection of short stories, Wolfshead. In either that book, or another — memory fails me somewhat — he had a great introduction about making a living without some sonofabitch standing over him. I had grown up in similar, if wetter and more lush, circumstances (East Texas is nothing like West Texas) and I could relate. Reading his stories, feeling his power and enthusiasm, I felt, perhaps wrongly, that a lot of those feelings were in me. Only without that pesky suicide problem. This must have been about 1970.

What is your ‘take’ on writing Conan? What do you find interesting about the character?

I like the very brutal world Howard created. I think I’ve captured a lot of that, and have gone at him with less apology. I have brought elements of myself. I have more of a sense of humor in my work, and I try to stay true to the iron of Howard’s work, something I incorporated into my own stories years ago. We are seldom alike, Howard and I, as far as subject matter, but I’ve been compared to him from time to time, and I suppose that’s the balls-to-the-wall element in some, if not all, of my work. I tried to bring these elements to the series, and again, something of myself. There’s little gained by being slavish. No one can be Howard. We can only give thanks and a nod to him, and try and interpret his world. Even if we don’t mean to, we bring something of our own point of view to the work. Point of view is what defines a writer.

I thought I caught a bit of an echo of Hap and Leonard in the snappy dialogue between Conan and his companion Alvazar. Do you approach comic book scripting in a completely different manner from novel writing, or is there some carryover?

You’re right. There was some of that. I prefer to have two characters, and have them play off one another. I like Alvazar as much as Conan, and would love to write a series about him alone. Scripting comics, for me, is somewhere between writing a film script and a sketch. I write my comic scripts very much like film scripts. I’m a panel-by-panel guy, with dialogue as I go. No patching it in later. I hate that. That doesn’t mean Tim doesn’t make changes, he does. But I try to lay a framework that makes it exciting and interesting for him. In Tim’s case, I know him well, and know what he likes to draw, what we both want to see. I leave room for the artist, in this case Tim, to interpret it in his own way. It’s a collaboration, and that’s what makes it work. Tim and I especially compliment one another. 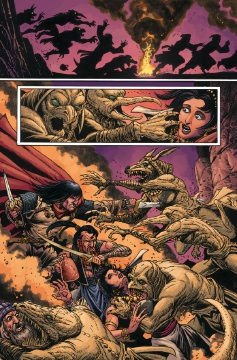 You and artist Timothy Truman have worked together on comic book series before. Do the two of you have a specific method to your collaborations? Script first or Marvel style, plot then art then script?

No Marvel style. I don’t even use that when I work for Marvel. I usually discuss the things that Tim likes about the character, or what kind of things he’d like to see in a story, what sort of interest he has, and then I try to incorporate that into my thinking. And then I sort of go off alone and write. I may not get everything Tim wanted, but I get strong set pieces and ideas. Originally, we meant to do a more Western theme in “Songs,” but I never got to it. I kept setting it up, and then the story completed itself. I’d love to continue from there to a more frontier-type story that I was working up to. Something even grimmer than the current one in many ways. I have it in my head, but not sorted out. Anyway, Tim then takes my script, and he may say, “Joe, I think it would be better with such and such in this scene.” I don’t think I’ve ever disagreed. He always makes sense to me. We are truly pretty much in touch on these things. Of course, I say that, and the next time we work together we won’t see eye to eye on anything. 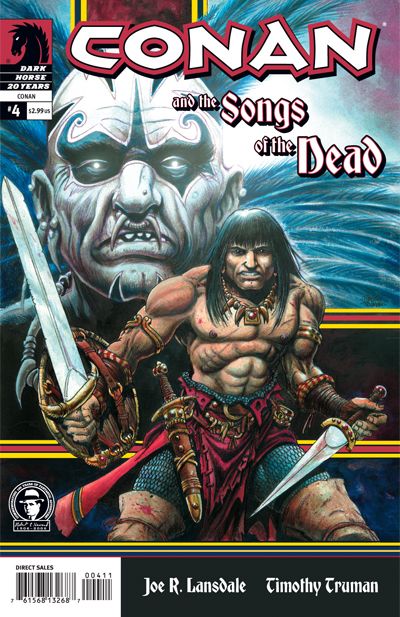 You’ve written novels in many genres, and many that defy genre definition. Who are some of your favorite writers and influences?

Zombies and the undead turn up in a lot of your work. Is this a reflection of your fondness for horror movies, or do you just like zombies?

Both. I like horror movies and I like zombies. I’m not sure what the attraction is. I think they are the darkest of the dark, because they are soulless and they aren’t normally witty, though they can be, and they are just plain old determined. I have another zombie idea or two, and then I think I’m about done on that one. I say that, and two more zombie ideas will come. It’s the easiest to do idea-wise, and the hardest thing to do well in horror. You really have to have a different angle. “On the Far Side of the Cadillac Desert with Dead Folks” is probably my best zombie tale. Tim did a comic of that, by the way, for Avatar Press.

Is there any of your novel work that you would particularly like to see adapted to comic book form?

A lot of it has been done by Avatar Press, with mixed results. I’ve liked some of it a lot, and some I’ve thought was good, but might have used a different approach in the art. Tim has spoiled me.

Are there any other Robert E. Howard characters you would like to write? Solomon Kane comes to mind. Any other sword & sorcery heroes, like Elric or Fafhrd and the Gray Mouser?

Solomon Kane would be nice. Michael Moorcock is the man to write Elric, of course. The Gray Mouser is cool, and I love Fritz Leiber. I was never a fantatic about Fafhrd and the Mouser, but always enjoyed them well enough to read them all.

Any upcoming projects you’d like to tell us about? Books, comics, films?

Lost Echoes is coming from Vintage Books in January or February. It’s kind of a supernatural novel. A lot of fun, I think.