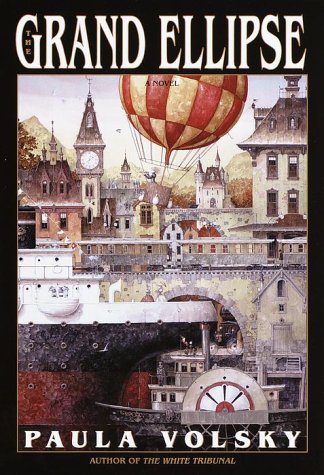 When I began reading SF and fantasy lo these many years ago, I started for many reasons, but the core reason was probably because I lived in a sleepy rural community and I really, really wanted some adventure. I would have loved Volsky’s latest novel back then, sheerly for the swift and heady rush of events. Now as an adult (mostly) I can also appreciate the wonderful characterization, the gorgeously textured settings, and the bravado blend of historical situation with magical extrapolation. This book is wicked good fun.

Volsky’s setting is a sort of alternate late 19th century Europe, one with familiar countries (though given assumed names), histories, and attitudes, but some decidedly different twists. Stern, arrogant Grewzland is running roughshod over the continent, consuming weaker countries one by one, bent on world domination. To the west Vonahr is nervously watching, having finally gotten over an earlier civil war which toppled the aristocracy and stirred up society at all levels. Luzelle Duvaire, the free-spirited daughter of a narrow-minded Justice on the Sherreenian Higher Court in the Vonahrian capital, strives to make an independent life for herself as a world-renowned explorer and author in a growing age of enlightenment. Only two things stand in her way: her parents’ archaic attitudes, and her dwindling supply of cash left from her aunt’s estate. If she doesn’t break even soon with her lectures and book sales, she may be forced to give up her dreams of independence.

Then an agent from the Vonahrian Ministry of Foreign Affairs makes her an offer she can’t refuse. Mad King Miltzin IX of the tiny, neutral country of Lower Hetz has announced that, in order to encourage advances in transportation and communication, he will sponsor a great race — The Grand Ellipse — over sea, mountain, desert, forest, and jungle. The Vonahrian government will cover Luzelle’s race expenses. If she wins, she will have the cash and fame she needs to stabilize her career — but in return she must convince Miltzin to sell Vonahr the secret of Sentient Fire, the unstoppable elemental creation of Miltzin’s mysterious sorcerer Nevenskoi. Without the deadly fire, Vonahr will surely fall to the Grewzlander forces which press closer to their borders every day.

Luzelle’s fellow eleven competitors in the Grand Ellipse include wealthy social-climbers, inventors, and eccentrics as well as determined adventurers. Rounding out the roster are two men who give her pause: handsome but reticent Grewzlander Overcommander Karsler Stornzof, and former Vonahrian noble Girays v’Alisante, the man she almost married six years ago. With the stakes so high, the last thing she needs is distraction. As if the race weren’t hard enough, however, with rivals pulling every dirty trick to gain the advantage, political strife and rebellion add extra hazard, thanks to Grewzland’s ongoing campaigns. Soon enough personal survival becomes as precious a goal as Mad Miltzin’s prize.

Volsky’s latest novel is full of everything that makes reading a pleasure: strong characters, exotic travels, excitement, even a bit of humor and romance. While she still isn’t terribly good at filing the serial numbers off the actual historical events from whence she draws her ideas, she has gotten much better at mixing and matching them: a self-assurance come through experience. The blending of magic and science is also intriguing, paralleling historical development of scientific understanding and technology, without distracting from the story itself. If you want adventure wrapped in a good story, you can’t do much better than this.