This is a complete work of fiction presented by Black Gate magazine. It appears with the permission of Paul Abbamondi and New Epoch Press, and may not be reproduced in whole or in part. All rights reserved. Copyright 2013 by New Epoch Press.

The first morning of what would’ve been Whitehours did not bring a chill, not even a single snowflake.

“Seasons are all amuck,” Uncle Hobnor said, pulling off his onyx black boots. Perry, standing next to him and dressed in the same grass farming attire, mimicked his uncle’s mannerisms. They had both been prepared for a cold so bitter it burnt skin in moments. Instead, they stood layered in clothes beneath a raging sun, its mere presence an iniquitous sign that Lord Banamp would not let up.

Uncle Hobnor grunted. “I didn’t come to Gorodun to sweat myself thin and I won’t be staying if this is how it’s to be. Not for another six months of this, not for this at all.” He turned, shielding his eyes as he looked down toward the inner city, its towers standing tall, reddish flags billowing about stone ledges. The faint hum of horns carried over on the breeze. “Blasted season wrecker.”

“Why?” He snorted. “I’ll tell you, boy, it’s because of that damned sovereign’s heart.” In the distance, towering high above chipped marble houses and statues dressed in blooming vines sparkling with yellow and purple petals, was Lord Banamp’s impervious demesne. It was as prominent as the heat, as annoying as the beads of sweat dripping down both their faces. “That heart, I tell you, it’s as black as me boots and probably just as ruined. He’s a greedy man, and to men of greed go the riches. And the women, and the power, and the seasons. He decides what today or tomorrow is to be like, what three months might be, what six can look like, but he cares only for this warm weather so his flowers can live forever.”

Perry and his uncle returned inside their home, both equally disappointed that the weather had not changed. The heat had been nonstop, even more so for Perry who was too young to truly remember what a solid Whitehours was like. This heat, it was too much, and though everything was green inside Gorodun and around the sovereign’s walls, a number of citizens had become parched, left to fend for themselves, their skin sere and burnt. Like Perry and Uncle Hobnor. Lord Banamp allowed rain every three days, as to feed his city of plants and vines, but he’d put off any other changes of weather indeterminably.

“I think I’m beginning to forget what snow’s actually like,” Perry said, stripping off the heavy clothing. All previous sovereigns of Gorodun always brought the correct weather to the city on its rightful day. Today should have been snow, bitter winds, cold enough to see one’s breath as puffs of air. Instead, their house was stuffy and he could already feel the sweat glisten his skin.

“Me too, boy,” his uncle said as he disappeared into a back room. When he returned, there were two musty bottles in each of his hands. They both contained a mawkish liquid that bubbled from disturbance, one a dark green and the other mud brown. “Which is why we’re going to get it back.”

“Uncle Hob-hob?” Perry wiped his brow free of sweat. “What do you mean?”

Handing Perry the bottle of green liquid, he said, “That bottle will be the final blow to bring Banamp down. My bottle, here, will break the protective barrier he’s got around him when out in public.”

Perry didn’t know what to say. “But how?”

“I’ve been working on it ever since we bypassed Falltime.” He noted his nephew’s face, scrunched in. “What? I did study sometime at the academies when I was your age. Wasn’t always a farmer, you know. Maybe soon I’ll be something more.”

Perry shook his head, finally understanding what his uncle meant to do. It was murder, plain and simple, and he voiced his opinion.

“It’s either this or we sweat ourselves to death.” The puckish man flashed a smile, held his bottle up to his face, and began to hum a holiday tune. One often sung on the eve of the last day of Dryburn, when everything was ready for the change of seasons. Perry watched silently, unsure of how to respond. The bottle in his hand bubbled from the heat.

“This is it, boy,” Uncle Hobnor said, shoving the bottle into Perry’s hands. “It’s now or never, as they say. No turning back. You get to your side and wait for the signal. After mine takes out his shield, you toss yours down. Got it?”

Perry nodded and left his uncle on one of Gorodun’s building tops. From here, the weekly parade below was in perfect view. There were the same elephants draped in shimmering cloth, dancers as illusive as ghosts, dwarves tossing their steel balls of fire in the air, and at the center of it all, the sovereign, Lord Banamp, garbed in his finest silks. Around him, his invisible shield glinted under the sun.

Perry loved his uncle, but felt nervous as he climbed the opposite housetop, bottle at his side. Was this the right way about it? He didn’t know how else to go about it, and, as he wiped wet hair off his face, he decided he was tired of the heat.

The music grew louder, the elephants marching on below.

“Give us back Whitehours, you tyrant!”

The signal. Perry tightened his grip on the bottle’s neck, sweat making his hands slide up and down it like a pole. He watched as his uncle lobbed his bottle down to the procession. It struck the barrier around Lord Banamp, cracking it like a glass vase. It shattered, and there came a small explosion, setting the man and his carriage aflame. The elephants before it, startled from the noise and screams, broke into a run, trampling any in their way. Dust and smoke billowed about.

“Boy! Throw yours!” His uncle shouted at him, waving his hands, anything to get his attention. Perry stared in horror at the destruction below. He felt stiff, unable to move or make a decision, completely struck cold. He watched the flames flicker and the smoke teem across the streets. He could not throw his bottle.

He caught movement below. Through the smoke and fire, a man crawled forward, clearly burned and in pain but certainly alive. It was Lord Banamp. The man spat something inaudible, motioned as if to grab a handful of clouds, and turned a myriad of blues. The smoke around him parted. Perry felt his skin tingle.

Above, a cloud grew. It twisted and turned, pulling itself apart, forming shapeless shapes and thundering within. A white bolt, sharp as steel, burst from it, striking the building his uncle stood atop. It crumbled, losing itself amongst rubble and smoke. Though Lord Banamp’s barrier was gone, his power was not.

“No!” Perry looked for any sign of his uncle’s survival. Lord Banamp crawled across the street, leaving a faint trail of blood from a leg wound. Perry watched the man disappear down the alley on his building’s side.

His uncle’s words struck him, more powerful than before: No turning back.

Perry tossed his bottle over the building’s edge. He turned to retreat, knowing he had to get off quickly and find his uncle. Midway down, everything shook from the explosion. More smoke filled the streets. More dust.

Once on the street, Perry made his way across to search the rubble for his uncle. Again, his skin tingled, this time a bit different than before.

A single snowflake floated down before him; he held out a hand and caught it, watching it melt into a minuscule droplet in his palm. Whitehours was here, only a day late. He wondered if, like Dryburn, it would be unending or if a new sovereign would take charge, one not so as devious as Lord Banamp.

“Whitehours, Uncle Hob-hob,” Perry said, pulling back chunks of rock and stone, searching. He knew his hope was foolish, but he didn’t care. He continued to dig. “It’s here. Don’t you want to see? See the snow. Whitehours, it’s here.” 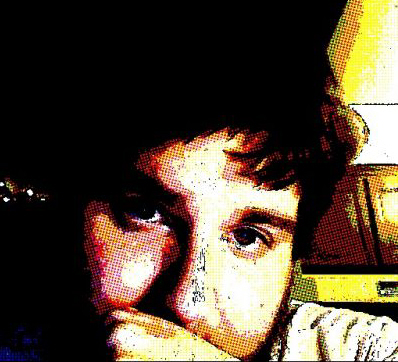 Paul Abbamondi lives in the middle of the Pennsylvanian woods with his wife and two cats, reading, writing, and drawing. His short stories have appeared in Shimmer, Farrago’s Wainscot, Warrior Wisewoman 3, and Kaleidotrope, among other publications, and he enjoys all things weird.

You can check out more of his work at paulabbamondi.com.

One thought on “Black Gate Online Fiction: “So Go the Seasons””