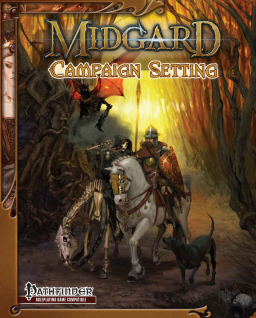 I confess that I have a problem with a lot of RPG campaign settings on the market. Some of them are simply tired and played out. Some are designed to lock customers into purchasing adventures and sourcebooks, leaving little room for customization. Some take a “kitchen sink” approach, avoiding anything too distinctive in an effort to support every type of campaign.

As the lead designer and publisher at Kobold Press, I decided it was time to launch a project that would reinvent a few fantasy traditions, and restore all that I think is great and good in classic fantasy RPGs. It would be based on time-tested elements of my own homebrew campaign, not on market research, potential licensing opportunities, or maximizing shareholder value. It was time to let slip the drakes of war, sharpen up the great ax, and split some skulls with a new setting!

With that in mind, I worked with my talented colleagues Jeff Grubb and Brandon Hodge, and the Open Design community, to create the Midgard Campaign Setting. It’s made for conflict, plunder, deep magic, and horrific secrets. That’s reflected in the design choice to provide clear adventure hooks for every place described in the book, for instance, and in the decision to provide a system of ley line magic. Better yet, much original material for Midgard is written by newcomers, so it’s a place where everyone can sharpen their game design chops (more on that in a minute!).

When you’re in Midgard, you’ve got big missions, mythic adventures, and lots of options — but the setting is designed to be compact and easy to pick up. There’s also the part that’s harder to explain, the getting-fantasy-right part. To quote a new fan TwistedGamer

The masks of the gods, the blending of myth and pure invention, the shadow roads and some new, lighter elements like the beer goddess and the school of clockwork magic all make Midgard sing.