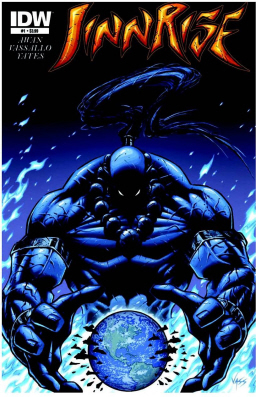 “The game of life’s about us all…wherever we are or wherever we’re from.” Jinnrise, my comic book series published by IDW Publishing, was inspired by this mantra and line from issue #1. The best of stories, those that resonate throughout the ages, start with the seeds of a theme.

Informed by the writer’s passions and experiences, the essence of the story springs forth. Such was the case for me.

Growing up in a mixed heritage household, I found myself drawn to novels, comics, and films that celebrated our common humanity. Fears, hopes, nightmares, and dreams: the ties that bind were what fascinated me the most. The outer trappings and vehicles of storytelling? In the short term, they didn’t really matter.

As I became a more discerning fan of genre entertainment, I grew less and less excited about the tentpole projects being announced year after year. Conventions like San Diego Comic-Com were no longer celebrations, but yearly commentaries on the growing stagnancy in science fiction and fantasy.

How many stories with zombies, vampires, robots, and wizards could one enjoy without being overwhelmed by déjà vu?