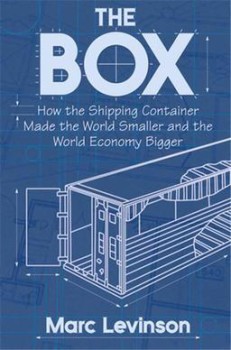 The Box: How the Shipping Container Made the World Smaller and the World Economy Bigger
Marc Levinson
Princeton University Press (400 pages, $20.95, January 27, 2008)

Just finished reading The Box: How the Shipping Container Made the World Smaller and the World Economy Bigger by Marc Levinson.

Stifle that big **YAWN** for a minute. Especially as a science fiction writer, I love these histories of ordinary technologies, because they remind you that “ordinary” is itself a myth. Some revolutions come with explosions and special effects and some sneak up on you, but they both change the world.

As Levinson himself says in the book’s introduction, shipping containers are just big aluminum shoeboxes, less esthetically interesting than a can of beans, but their effects were just as revolutionary as the microchip and the Internet, and they were probably more important in building the globalized economy we live in today.

Before containers, loading a single ship with cargo was backbreaking, labor-intensive sweatwork that could take multiple gangs of longshoremen a week or longer. Costs were high, efficiency was low, wages and working conditions were terrible, and corruption and theft were endemic. However, at the same time, traditional ports supported a culture of their own, with whole neighbourhoods, factories, and a complete way-of-life centered around them.