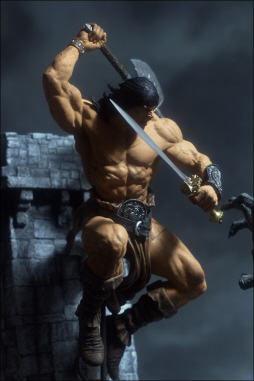 Imagine Conan in Shadizar, meeting with a beautiful woman calling herself Fortuna who pays him to find Thuris, the man who kidnapped her younger sister. Conan accepts the woman’s coin but finds himself in the middle of double and triple crosses as Fortuna — known as Brigid the Bold in the underworld — seeks for the Falcon of Maltus along with her betrayed confederates, Jubliex Cairo, Wilmer the Younger, and Gutmar.

Think of Fafhrd and the Grey Mouser hired by the powerful merchant Sternwood to scare ne’er-do-well Geiger away from the merchant’s daughter Carmen, only to be caught up in blackmail, murder, kidnapping, and family secrets.

Yes, those were the plots of The Maltese Falcon and The Big Sleep using three of the iconic characters of sword & sorcery. That’s what I’d call Sword Noir, and that’s what I called the role-playing game I just published, subtitled A Role-playing Game of Hardboiled Sword & Sorcery.

Sword Noir is a game now, but it started as something a little more than a conceit and little less than a genre. Basically, I attempted to give some kind of short-hand to the stories I wrote. 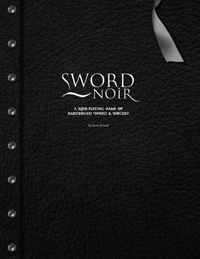 As usual, the kind of stories I was reading and writing bled into the kind of games I was playing, and this took me down a path I did not expect. I ended cobbling together a system that was purpose built to play “sword noir.” In order to do that, I had to define the term.

This is what I came up with: Characters’ morals are shifting at best and absent at worst. The atmosphere is dark and hope is frail or completely absent. Violence is deadly and fast.

The characters are good at what they do, but they are specialists. Trust is the most valued of commodities – life is the cheapest.

Grim leaders weave labyrinthine plots which entangle innocents. Magic exists and can be powerful, but it takes extreme dedication to learn, extorts a horrible price, and is slow to conjure.