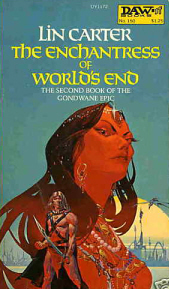 Linwood Vrooman Carter (1930-1988) was one of the heroes of my youth. In the decades since his death his reputation has wallowed in the aftermath of the Last Great Sword & Sorcery Boom. He helped start it, with the Conan books he and L. Sprague de Camp brought back into print, edited, and in many cases wrote, as with the Ballantine Adult Fantasy Series of works he edited and thus brought back into print. (Not adult fantasy as in sex, but adult fantasy as in great classic works that weren’t kid stuff). Books by Lovecraft and Clark Ashton Smith and James Branch Cabell; title I never would’ve read in a million years otherwise, but books which shaped the tastes of many another fantasy enthusiast, myself among them.

Despite the vast number of books written in the Sword & Sorcery genre in the past 80 years, when I found myself again turning an eye toward them, one of the first people I sought out was Carter. I distinctly remember the day, age 13, when I bought his Enchantress of World’s End off the spin rack at the Wal-Mart in Harrison, Ark.

The bare-bosomed, bright red beauty on the cover caught my eye, as did the unpronounceable names (Northern YamaYamaLand, Dzimdazoul’s Deep – not to mention the Ethical Triumvirs of Chx!), and of course the cast: Ganelon Silvermane, muscle-clad hero with the mind of a child, his master the Illusionist of Nerelon, face always hidden behind veil of purple mist, and the delightful, freckled, long-legged and sexy Xarda, Knightrix of Jemmerdy.

END_OF_DOCUMENT_TOKEN_TO_BE_REPLACED 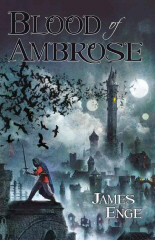 I was commenting the other day on the surplus number of wonderful S&S anthologies I’ve stumbled on since a friend and I began a collaborative shared world writing project a few weeks ago, both writing stories set in a fantasy/medieval city with a history and a river and neighborhoods and taverns and all the usual trappings. His background in world building (via D&D or whatever) is less than mine, and mine is quite scant, so our efforts have grown in odd bits and pieces: first the tavern, then the name of the city, then a mountain backed up against it, and so on.

And while writing and inventing and noting what I was writing and inventing, I’ve kept reading new (to me) material, noting those books and writers people clamor about and ordering their books and waiting impatiently by the mailbox every afternoon to see what’s arrived – David Gemmell’s first novel, or George R. R. Martin’s A Game of Thrones, or Matthias Thulmann: Witch Hunter  or, just yesterday, James Enge’s Blood of Ambrose  – I read and very much enjoyed his “The Red Worm’s Way” in Return of the Sword and want to read further about his hero Morlock Ambrosius…

END_OF_DOCUMENT_TOKEN_TO_BE_REPLACED 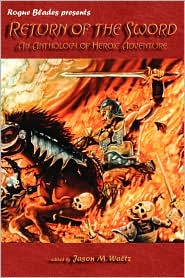 I read an interesting post the other day by a thoughtful blogster whose name I cannot now remember and whose post I cannot locate again, who professed his surprise at all the fans of Conan (and Sword & Sorcery in general) who were returning to the fold now, after falling away in the 1980s, after the last Big S&S Boom.

I confess myself one of those folk. I don’t know what happened. Life, I guess. There weren’t any more new books – or if there were, I didn’t see them – and so I drifted on to other things. (I should add that I got my degree in English Lit after that time, and those bastards had no use for genre fiction of any kind, much less the kind of stuff I’d been cutting my teeth on since I learned how to read – e.g. Zelazny, Howard, Fritz Leiber, et. al. Plus I tumbled onto so many other writers — e.g. the Beats, Bukowski, Henry Miller, and *then* Poetry, in which I immersed myself for several years. But I digress…)

I’ve been delighted though in the past month or so to see all the new material being produced along sword & sorcery lines (new to me at least). A whole slew of beautiful anthologies: LORDS OF SWORDS, SAGES & SWORDS, RETURN OF THE SWORD, RAGE OF THE BEHEMOTH. It is a wonderful thing. I am reading them all simultaneously and will discuss them here, and at my blog.