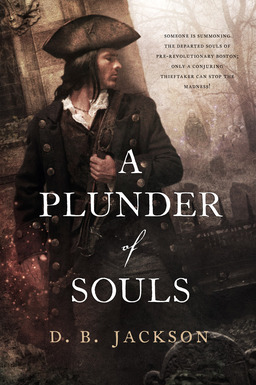 Late last summer, I was interviewed by Garrett Calcaterra for a Black Gate article on the writing life of midlist authors. That article, which also drew upon interviews conducted with Patrick Hester, Wendy Wagner, and M. Todd Gallowglas, can be found here and is still worth reading.

But I thought it might be interesting, a year later, to revisit the life of at least this midlister to see how things are going. A bit of background first: Under my own name, David B. Coe, I have been writing professionally for twenty years now, and I’ve been a published author for seventeen. “What’s the difference?” you ask. Well, I signed my first publishing contract and received my first (microscopic) advance in the summer of 1994. But that first book needed to be edited, revised, edited again, revised again, copyedited, and proofed. And it needed to be fitted into the already crowded publishing schedule of Tor Books. It finally was released in May 1997.

Which brings us to the first of many hard truths about the publishing industry: It moves at its own, sometimes glacial, pace. Yes, this is one reason why some writers grow so impatient with the business that they turn to self-publishing, which offers more immediate gratification for those who are eager to see their work in print. But for more reasons than I can go into today, that is not a path I have chosen to follow.

Writing now as D. B. Jackson, I am the author of the Thieftaker Chronicles, a historical urban fantasy series set in pre-Revolutionary Boston. The first two books, Thieftaker (Tor Books, 2012) and Thieves’ Quarry (Tor Books, 2013), have been received very well critically and did well enough commercially that Tor bought two more books from me. The first of these, the third in the series, is called A Plunder of Souls and it drops on July 8, 2014. (Please buy it. In fact, feel free to buy a few copies; they make great gifts and come in an attractive package complete with artwork by Chris McGrath. We now return to our regularly scheduled blog post . . .)

The fourth Thieftaker novel, Dead Man’s Reach, will be out next summer. And here we come to hard truth number two: For most full-time writers not named Martin, Gaiman, or Rothfus, one release per year is not enough to make a living. Most of the writers I know have a couple of projects going at once. I’m no exception.

END_OF_DOCUMENT_TOKEN_TO_BE_REPLACED 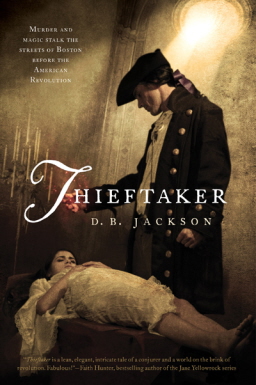 Today I have the pleasure of publishing an interview I’ve had with Ethan Kaille, one of Boston’s leading thieftakers.

Welcome, Mr. Kaille, to my humble office, and thank you for taking time to speak with Black Gate. Please begin by introducing yourself to our readers. Who is Ethan Kaille?

I am no one of consequence, really.  I work in Boston as a thieftaker — for a negotiated fee, I recover property that has been stolen, and return it to its rightful owner.

Surely there is more to your life than thieftaking. What did you do before you began to work in your current profession?

[Long pause.]  I don’t usually like to speak of it, but if you must know, I was a prisoner. Years ago, as a young, foolish man, I took part in a mutiny aboard a ship called the Ruby Blade.  When the mutiny failed, I was placed in the brig, and eventually was tried and convicted.  The Admiralty Court spared my life, but sentenced me to fourteen years at labor on a sugar plantation in the Caribbean.

And before all of that, I was a sailor in the British navy, just like my father before me, and his father before him.  I enlisted during the War of the Austrian Succession and fought at Toulon as a crewman aboard the HMS Stirling Castle.

When was the first time that you became aware of your powers as a conjurer?

I don’t know what you’re talking about.

END_OF_DOCUMENT_TOKEN_TO_BE_REPLACED

Thieftaker, the first volume in my new series, The Thieftaker Chronicles, is due out from Tor on July 3, just in time for the July 4th holiday. Why is that relevant? Well, Thieftaker is what I call historical urban fantasy. It is set in Colonial Boston in the 1760s, just as the unrest that will eventually lead to the American Revolution is starting to disrupt life in the city. My lead character, Ethan Kaille, is a thieftaker, a sort of 18th century private investigator who, for a fee, retrieves stolen items and returns them to their rightful owner. He is also a conjurer and an ex-convict with a dark past — he is, in my opinion, the most interesting and complex character I’ve ever written.

The novel begins on the night of the Stamp Act riots. While a mob is rampaging through the city streets, a young woman, the daughter of a wealthy merchant, is found murdered. Some want to blame the mob for her death, but naturally our hero has other ideas, and soon he’s drawn into a web of intrigue that puts him at odds with representatives of the Crown, with leaders of the revolutionary movement, including Samuel Adams, with a rival thieftaker — the beautiful and deadly Sephira Pryce — and with a mysterious conjurer who is far more powerful than anyone Ethan has encountered before. I won’t say more than that, because I don’t want to spoil any surprises. But basically the book combines fantasy, mystery, and historical fiction in a way that I think turned out pretty well.

This book, my thirteenth (I’ve written a dozen novels, most of them epic fantasy, as David B. Coe; and by the way, pay no attention to the omen of this being my 13th published book — nothing to see here…) has long meant more to me than any of my others, and, to be perfectly honest, I’ve been trying to figure out why. Part of it might be the very fact of the pseudonym. I’m trying something new here — writing historical urban fantasy instead of the epic, alternate world stuff that I’ve done in the past. I’m enjoying myself, and I want to keep writing this series. If the first book does well, I can.