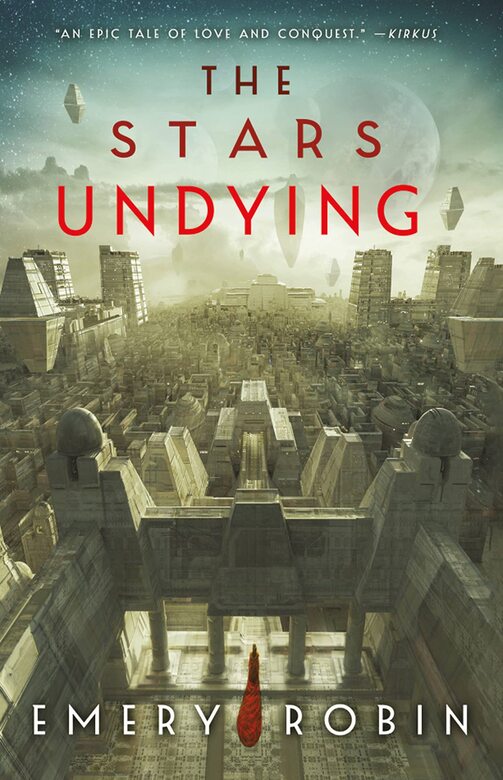 For all that I rely on social media and online browsing to keep me in-the-know these days, there’s still no substitute for a well-stocked bookstore. Case in point: I visited our local Barnes & Noble in Geneva, Illinois on Saturday, and came away with an armful of discoveries that will keep me busy for weeks.

I’m looking forward to telling you about every one of them. But let’s start with the most intriguing: The Stars Undying, the debut novel by Emery Robin, a space-opera retelling of the twisty tale of Antony, Cleopatra, and Julius Caesar that Chicago Review of Books calls “Spectacular.” It’s the opening novel in Empire Without End, an ambitious new series, and it might just get me to bend my rule about waiting until a series is complete to dive in.

Here’s a slice of that Chicago Review of Books review by Rebecca Peng.

In Emery Robin’s sweeping space opera, The Stars Undying, Cleopatra’s crucial accessory is not her crown but a pearl-sized computer, alleged to contain the consciousness of Alekso, her god.

This is one of several brilliant twists in a largely faithful adaptation of the famous dramas of Cleopatra, Julius Caesar, and Mark Antony, spaceships and holograms aside. Full of dueling egos and narratives, The Stars Undying alternates between two perspectives: Princess and Oracle Altagracia Caviro Patramata, our cunning Cleopatra, and Commander Matheus Ceirran, a charismatic Caesar. Robin leverages these two legendary egos to great effect, charting their relationship and Ceirran’s rise to power. The result is an ambitious blend of romance, tragedy, and political intrigue, and one that probes compellingly at the unsteady boundaries between divinity and duplicity.

The novel’s first two acts are particularly combustive, brimming with chemistry and verve. We open on Altagracia’s rebellion against her twin Arcelia. The sisters are locked in a struggle for queenship over their planet, Szayet, and the right to wear Alekso’s pearl, the aforementioned gem-sized computer the Szayeti believe contains Alekso’s soul. To be Szayet’s queen is to be the oracle of Alekso (a wonderfully cunning riff on Alexander the Great), and both sisters long for the singular privilege of listening to Alekso’s counsel and serving as conduit of his divine will. From the outset of their conflict, engrossing worldbuilding is skillfully matched with tense action, immersing us in “Szayeti temples and markets and musicians’ alleys” and the detritus upon which this galactic kingdom as built, the “old Aleksan relics… battle plans and daily officer’s reports from [Alekso’s] years of campaigns, holo-portraits and biographies… new star charts and ancient ship computers”—and, eventually, first-hand testimony from Alekso himself…

An ambitious and sweeping debut, The Stars Undying shimmers with that transformative potential. One hopes that Robin will take more risks, and bring more invigorating, well-researched liberties to the forthcoming sequel. The novel is at its best when it goes beyond longing to replicate what is already immortal, when it surpasses solely keeping a beloved old story alive. It’s in these moments that The Stars Undying manages to transmute its famous truths and infamous lies into something breathtakingly new.