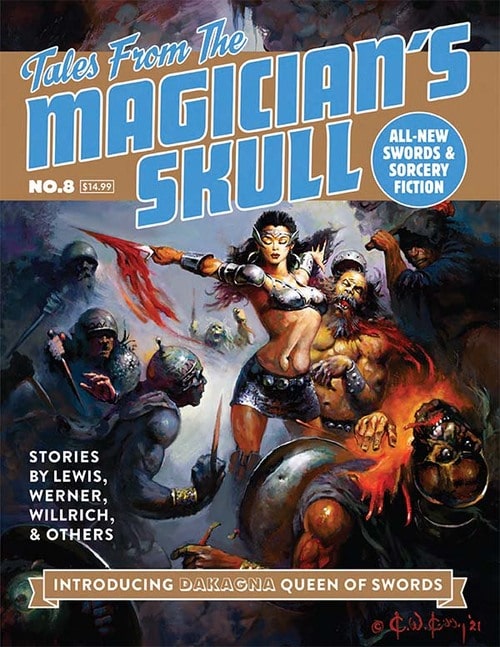 Tales From the Magician’s Skull #8. Cover by Ken Kelly

What have Howard Andrew Jones and his cabal of mad writers and artists been toiling to create, deep in the abandoned publishing mines below Evanston, Illinois?

Many bothans died to bring us early word, and now at last we can share it with you: it’s issue #8 of the world’s greatest Sword & Sorcery magazine, Tales From the Magician’s Skull!

According to hand-written notes scrawled by dying bothans, the long-awaited new issue is packed with fiction of keen interest to Black Gate readers, including a new Morlock tale by James Enge, a new Tale of Gaunt and Bone by Chris Wilrich, and fiction by C. L. Werner, Robert Rhodes, Jeremy Pak Nelson, and many others — all packaged under a cover by legendary artist Ken Kelly. The issue is available to buy today; check out all the details below.

Dakagna tried to keep her balance on the sludge of the floor, as the leviathan’s tail lashed towards her. She slipped, went with the movement, and dived. She felt something tear at her back, felt the familiar sensation of her blood flowing free.

“Sky Pirates of the Savage Clouds” by James Enge

A Story of Morlock Ambrosius • “Abandon ship!” shouted Morlock, and leapt into a nearby schooner. Eye-searing spearpoints of light bristled at him. He gripped Tyrfing with two hands and hewed at them, as if they were a field of wheat.

“I am Cayden MacLaird!” he shouted over the pipes. “Today I walk the path into the Dark Veil, and the Shades sing a merry tune honoring my arrival. Who amongst you wishes to join me?”

“The Lovers of Essail Pass” by Jeremy Pak Nelson

Hot blood covered my hands, the man’s ale-and cheese breath close to my ear. He would be alive for a moment, yet, but a man with two knives under his ribs cannot scream.

“To the Darkhouse” by Chris Wilrich

A Tale of Gaunt and Bone • The taper of the lighthouse recalled some immense green candle with a thousand grotesque faces formed of drippings. At the top the tower flared like a confluence of tropical fish fins, and a green translucent dome covered all like an immense emerald egg. The sickly green beam of light spun through the crystal, continually cast by some looming shadow within.

From the Tales of Shintaro Oba • Oba had to be careful of his footing as he moved among the graves, with chipped stones lying hidden in the tall grass. The shadows continued to writhe and distort in eerie ways, suggesting furtive movement that he could catch only from the corner of his eye.

A swarm of white moths burst forth from the corpse. Pristine. Like ghosts in the starlight. The moths spiraled upward, freed from that hideous prison. An incredible sight, but one that shook Acheron to the marrow.

“The Darkness and Ralshaa” by Alexander James

Acclimating to the subterranean luminescence, he was able to make out the murals etched into the walls. Pictures of small, pink, man-shaped creatures with infantile over-sized heads and large saucer-like eyes graced the hallway, engaging in acts too foreign for him to comprehend.

“The Martyr’s Cloak, The Fury’s Blade” by Robert Rhodes

Gabriela lifted her eyes to the bright air above the sea. She saw herself high on the mountaintop — balanced on an outcrop of stone or, impossibly, flying — as she defended the world against the hellfont, striking down devils as swiftly as they burst forth on wings of bat-leather and bone, her blade wreathed in fire like the invincible sun.

The Monster Pit by Terry Olson

Enter the monster pit! Down here in the pit, we provide tabletop RPG fans with playable DCC RPG game statistics for the creatures in this issue of Tales From The Magician’s Skull.

The Skull Speaks by The Skull Himself

The magazine is available in print (for $14.95), PDF, and ePub formats (for $8). Order copies directly from Goodman Games, or at Amazon here, or save money with a 4-issue subscription.

See our coverage of previous issues of Tales From the Magician’s Skull here, and see all our previous magazine coverage here.

always love this mag, havent cracked open my package yet, but excited to dig into more Morlock

The cover art for the first two years was mixed, but recently it’s been very strong indeed.

I just wish they would bring this out in Kindle or EPUB.

[…] It’s in Black Gate so it must be true—Tales from the Magician’s Skull #8 is in wide release, having previously gone out to Kickstarter backers. #8.5, the Kickstarter-only special issue, has also arrived in many a mailbox… […]