The first two issues of Futures Past, a Visual History of Science Fiction, edited and published by Jim Emerson

Way back in the 90s, before most of you young whippersnappers were born, Jim Emerson had a very fine fanzine called Futures Past, covering the birth of modern science fiction. He published four issues, each covering one year of SF history, from 1926-29.

In 2014 Jim resurrected his fondly-remembered zine as a 64-page digital magazine, with gorgeous full-color pages. The first issue covered 1926, the year Hugo Gernsback founded Amazing Stories. Futures Past Vol. 1 illuminated the Birth of Modern Science Fiction, covering all the highlights of science fiction publishing in magazines and books.

A Kickstarter intended to fund full-color print versions of the new version in 2014 wasn’t successful. Undaunted, Jim funded the project himself, and earlier this year I was surprised and very pleased to receive a print copy of Futures Past, Volume 2 in the mail. Covering the year 1927 and the Dawn of the SF Blockbuster, this 144-page publication is a love letter to a forgotten era, when a brand new literary genre was being born in the pages of pulp magazines, books, and on the silver screen. 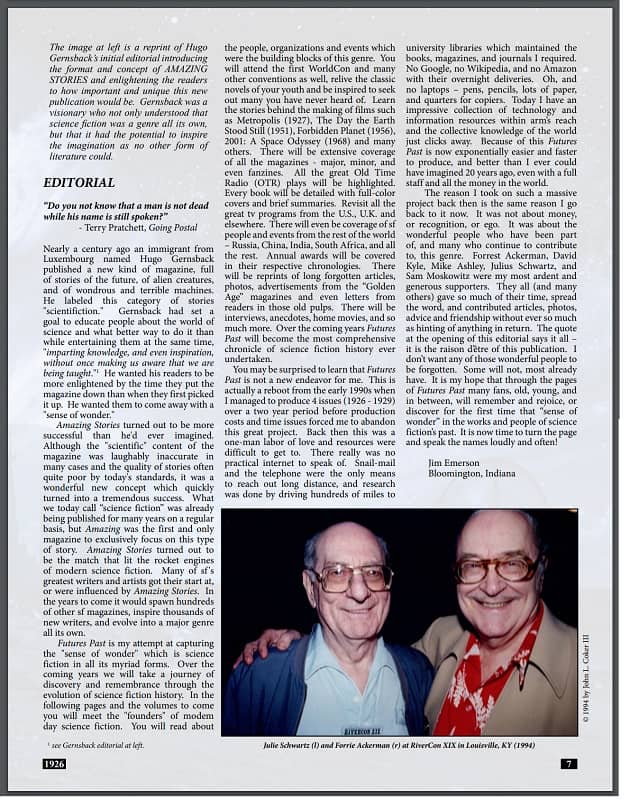 In his editorial in the first issue of Futures Past, Jim Emerson did a fine job expressing the love for the genre that drives him.

“Do you not know that a man is not dead while his name is still spoken?” – Terry Pratchett, Going Postal

Amazing Stories turned out to be the match that lit the rocket engines of modern science fiction. Many of sf’s greatest writers and artists got their start at, or were influenced by Amazing Stories. In the years to come it would spawn hundreds of other sf magazines, inspire thousands of new writers, and evolve into a major genre all its own.

Futures Past is my attempt at capturing the “sense of wonder” which is science fiction in all its myriad forms. Over the coming years we will take a journey of discovery and remembrance through the evolution of science fiction history. In the following pages and the volumes to come you will meet the “founders” of modem day science fiction. You will read about the people, organizations and events which were the building blocks of this genre. You will attend the first WorldCon and many other conventions as well, relive the classic novels of your youth and be inspired to seek  out many you have never heard of. Learn the stories behind the making of films such as Metropolis (1927), The Day the Earth Stood Still (1951), Forbidden Planet (1956), 2001: A Space Odyssey (1968) and many others. There will be extensive coverage of all the magazines – major, minor, and even fanzines. All the great Old Time Radio (OTR) plays will be highlighted. Every book will be detailed with full-color covers and brief summaries. Revisit all the great tv programs from the U.S., U.K. and elsewhere. There will even be coverage of sf people and events from the rest of the world – Russia, China, India, South Africa, and all the rest. Annual awards will be covered in their respective chronologies. There will be reprints of long forgotten articles, photos, advertisements from the “Golden Age” magazines and even letters from readers in those old pulps. There will be interviews, anecdotes, home movies, and so much more. Over the coming years Futures Past will become the most comprehensive chronicle of science fiction history ever undertaken…

The quote at the opening of this editorial says it all – it is the raison d’être of this publication. I don’t want any of those wonderful people to be forgotten. Some will not, most already have. It is my hope that through the pages of Futures Past many fans, old, young, and in between, will remember and rejoice, or discover for the first time that “sense of wonder” in the works and people of science fiction’s past.

In his last paragraph Jim expresses well that thing that drives so many of us in the fan press — the tireless urge to share the wonders we discovered in our own youth, and pass them along to a new generation. I recognize that urge, and I salute it (as much as I respect Jim’s admirable confidence that he’ll be around to cover 2001: A Space Odyssey (1968) in issue 43 of Futures Past, especially considering the 8-year gap between issue 1 and issue 2.) 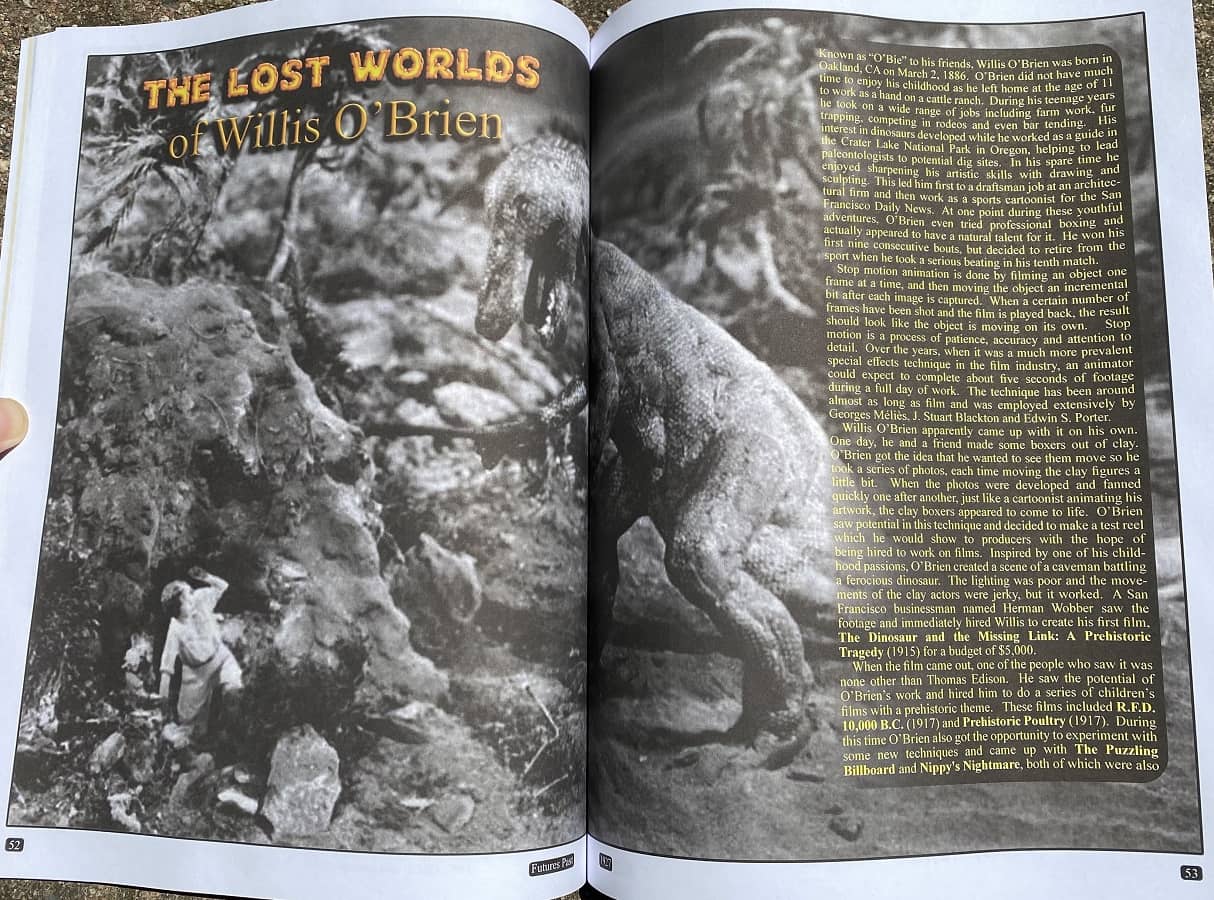 From Futures Past, Volume 2 — a look at pioneering stop motion special effects
Willis O’Brien, including his work on the famous 1925 silent film The Lost World

There’s a whole mess of great stuff packed into this thick magazine/book, including:

and a whole lot more, including a history of the evolution of film technology from 1832 – 1920, an introduction to film preservation and its importance to the silent era, a biography of Georges Méliès, and coverage of science fiction publishers and the amateur press. 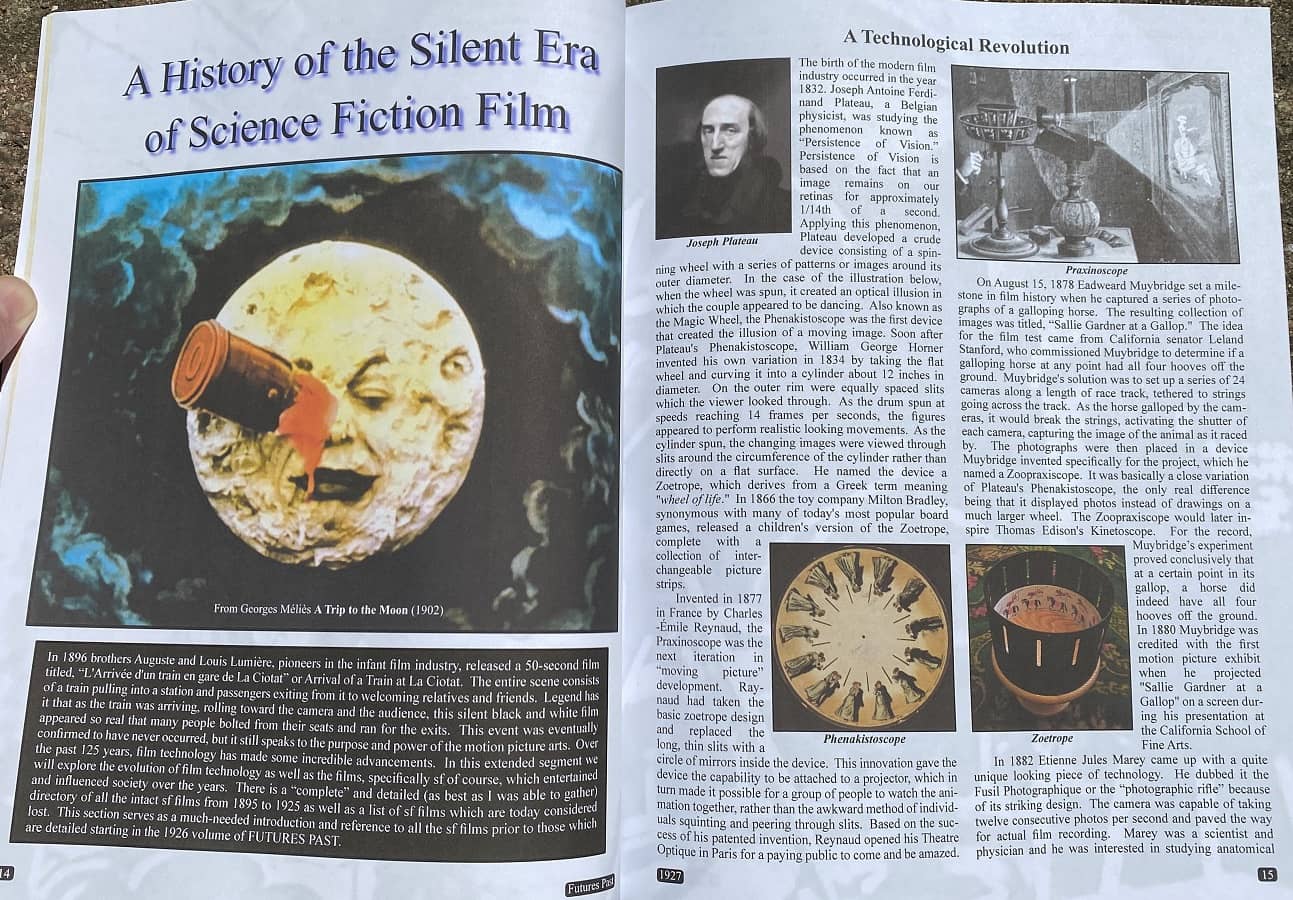 Futures Past, Volume 2 is visually lush and makes for great reading. It’s the kind of book that will be instantly appealing to anyone with an interest in pulp science fiction and SF history — and modern readers curious about the roots of SF cinema, art, space opera, and science fiction in general.

Jim fulfills at least one of the promises he made in his editorial eight years ago — this issue of Futures Past dives into Metropolis in a major way, with a 36-page section devoted to “the first science fiction blockbuster.” This was my favorite section, as it’s packed with all kinds of fascinating tidbits, including an overview, profiles of the creators, and a look at the film’s enduring legacy in film and SF in general.

But the most interesting portion of this lengthy study was the history of the many versions of the 2.5-hour film, which was heavily cut almost from its first release. When it arrived on US shores in 1927 Paramount hired playwright Channing Pollack to rewrite the entire thing, cutting it from 12 reels down to a standard 7-reel feature with a runtime of about 90 minutes.

After the war the original version was believed lost, triggering a decades-long search for the original extended cut of Metropolis. Film historians recovered much lost footage, including the famous 1962 “war loot” cut found in Moscow, but it wasn’t until 2008 that a complete 16-mm copy of the original was located in Buenos Aires, and finally shown to a sold-out audience in Berlin in 2010. 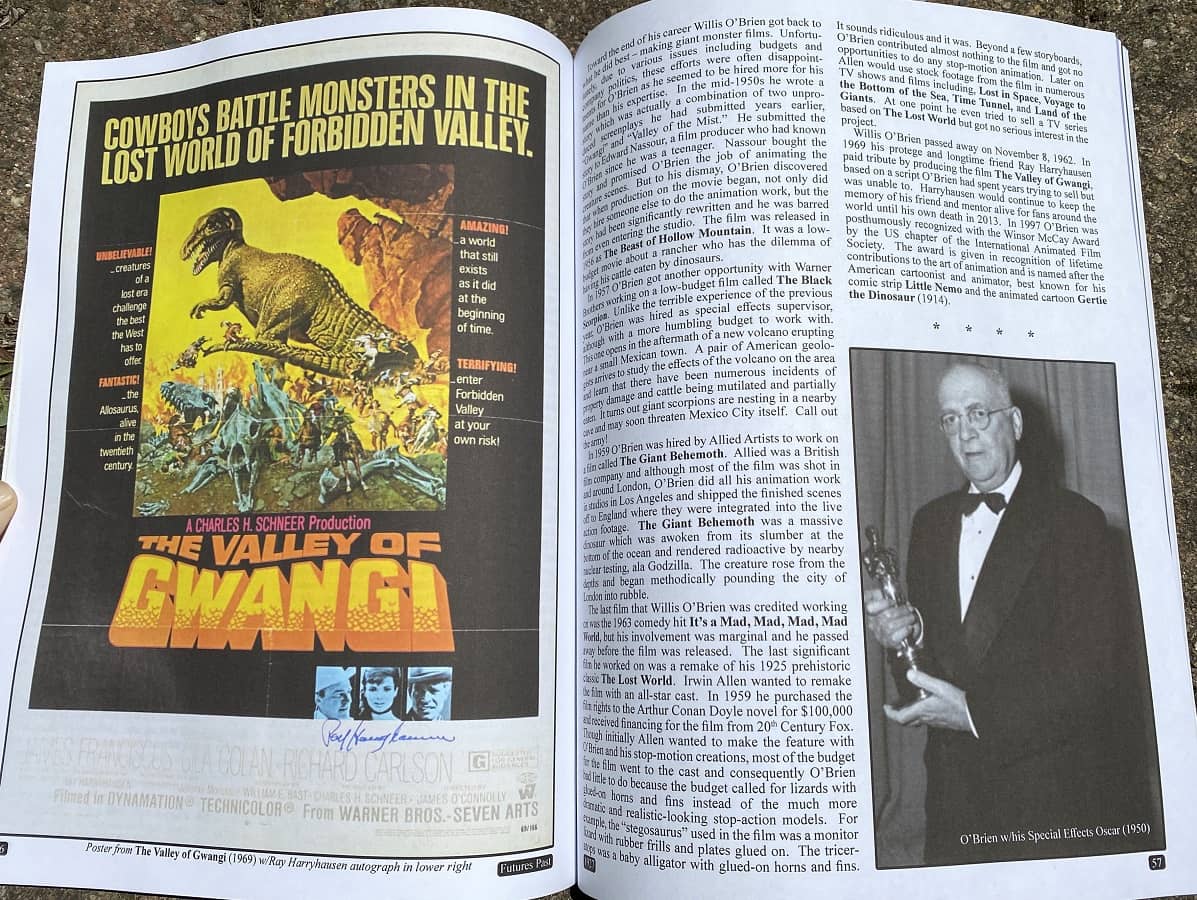 Part of The Lost Worlds of Willis O’Brien in Futures Past, Vol 2

There’s a lot to enjoy in Futures Past, Volume 2, and it’s a delight to see that this issue is so much larger and more expansive in its coverage than the first — and I certainly had no complaints about that one.

It I do have a complaint, it’s that this is too large a project for just one person. Jim Emerson is a very fine writer, and I have no issues with what he’s produced here (beyond the obvious one, that it took eight years for it to arrive). But in any 144-page retrospective, you start to yearn for a different perspective after awhile. I think Futures Past would be nicely enhanced by additional contributors, and I could easily name a dozen or two who would love to participate given the chance. 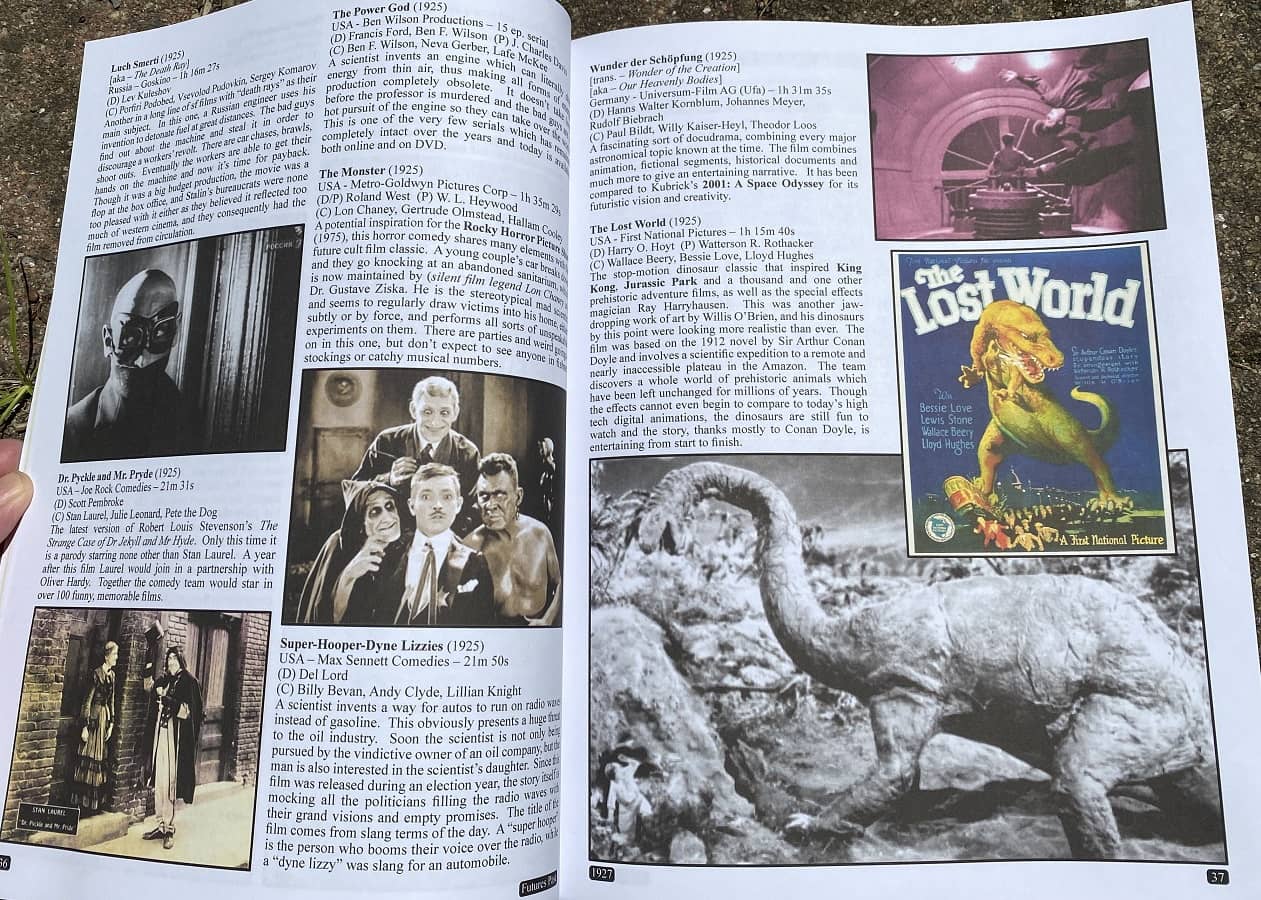 Part of the Dictionary of Science Fiction Silent Film in Futures Past, Vol. 2

Beyond the Metropolis section, my favorite part of Futures Past Vol 2 was the in-depth magazine coverage, with gorgeous cover reproductions — in color — of every significant SF mag of the era, including Amazing Stories, Weird Tales, Argosy, Radio News, and Science and Invention.

Emerson provides detailed and entertaining commentary on the mags, including the standout stories, series, new authors, editorials, covers, interior art, letter columns, contests, and industry gossip. It was in the pages of these magazines that modern science fiction was born, and science fiction fandom right along with it.

There are intriguing sidebars as well, such as one on Hugo Gernsback’s notorious payment practices (it was widely said, even at the time, that he “paid on lawsuit.”)

Emerson has his finger on the pulse of both the issues of the time, and the ones that would would become important in years and decades to come. This is fascinating stuff, and I’m certain it will be invaluable for fans and scholars of all kinds.

Below are a few more snapshots I took of the gorgeous interiors of Futures Past, Volume 2. Enjoy! 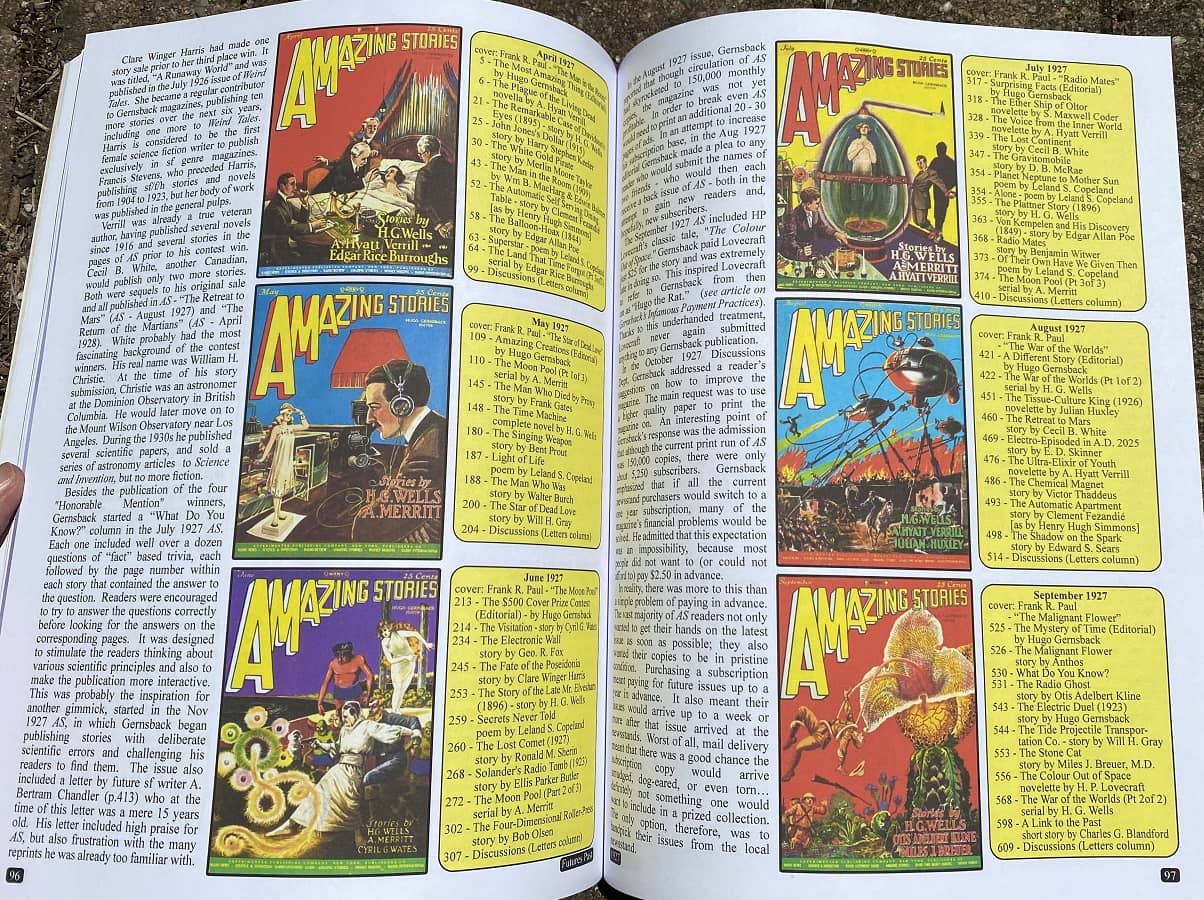 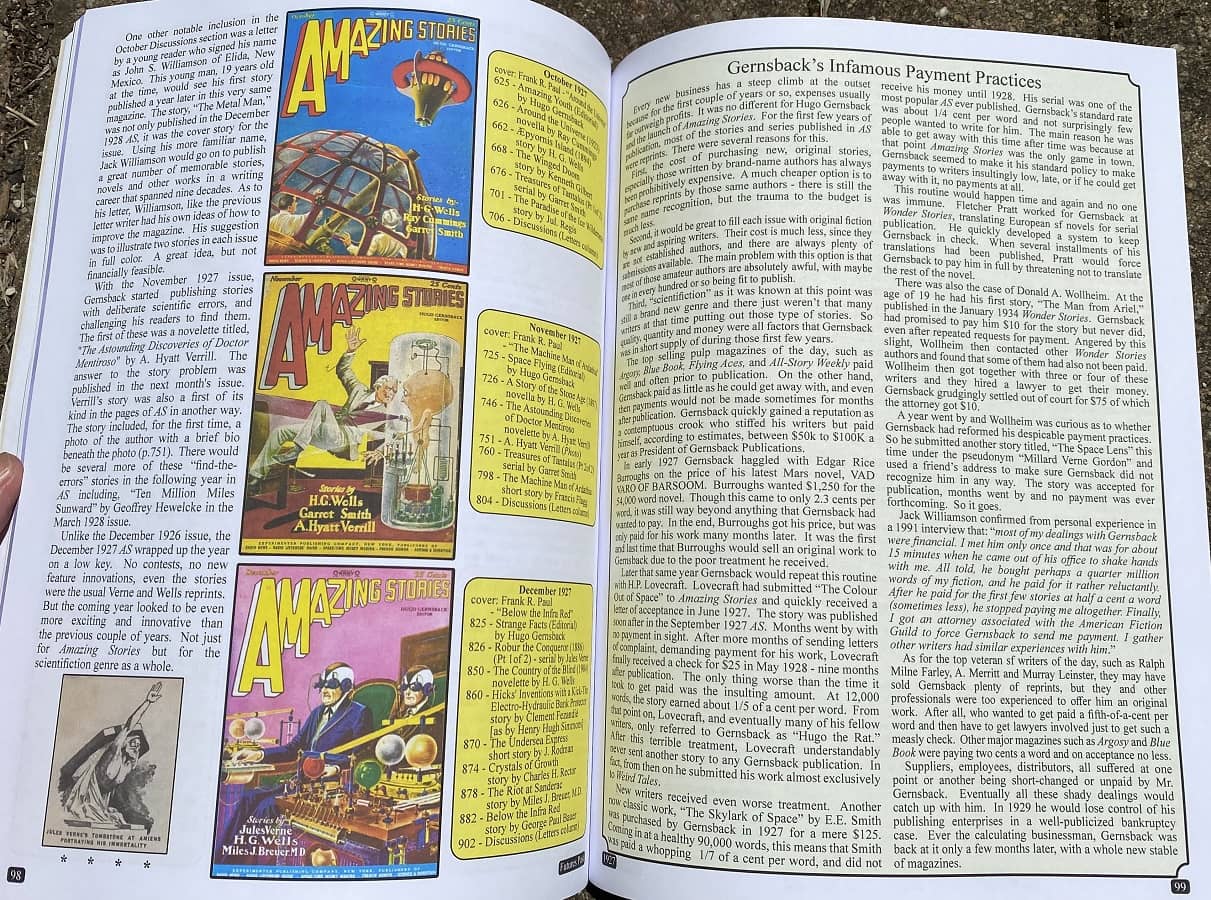 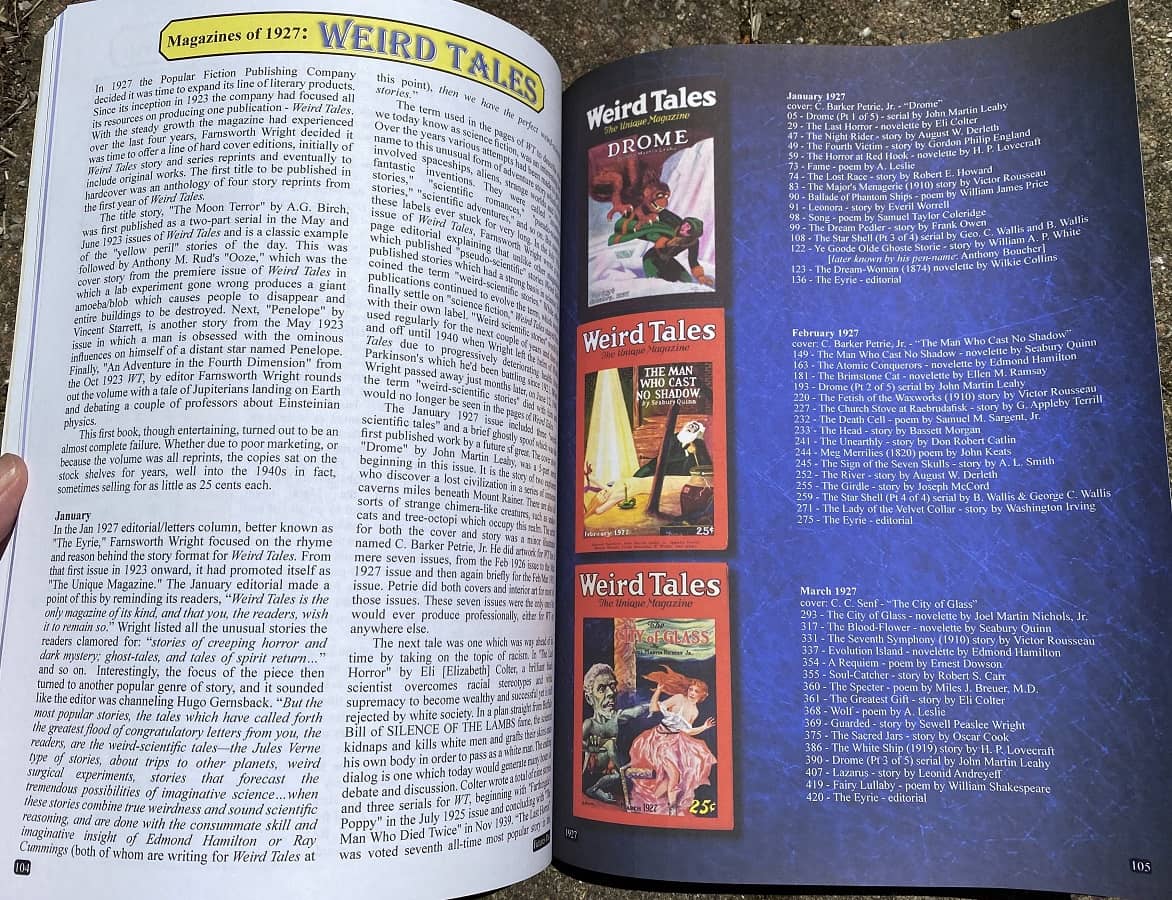 Futures Past Volume One was published in 2014, and Volume Two in 2022. Jim Emerson tells me the third volume “is well along with a completion date in late August,” and I’m very much looking forward to it. You can get all the news (including info on Jim’s upcoming podcast) at his website, sfhistory.net.

Print copies of Futures Past 1 are now available, $19.95 in softcover and $27.95 in hardcover. Futures Past Volume Two is currently available in three formats: PDF, softcover, and hardcover. PDF version is priced at $18, the softcover is $28.95, and the hardcover is $36.95. Order directly from the publisher here.

We looked at the first issue of Futures Past here, and you can download the complete 64-page full-color issue for free here. (Read a great review at Classics of Science Fiction).

See our previous coverage of SF history and pulps here.

This looks to be a real labour of love. Big respect to Jim Emerson for the investment he has made in this, hope to see many more volumes.

Jim has shared plenty of news about upcoming volumes, and they sound terrific. Here’s Jim.

Vol. 3 is progressing well. At this point I am still right on schedule for the end of August, but if I do run late, it will only be by about 3-6 weeks. My initial estimate for August was based on a book that looked like it was going to be about 80-100 pages. At this point I have compiled about 110 pages and a rough estimate looks like the final product may actually be about the size of Vol. 2, maybe even a bit bigger.

The theme for Vol. 3 is Space Opera. So besides the regular sections on books, films, etc. of 1928, I am including a half dozen lengthy profiles/articles. The first one, though not directly Space Opera related, is a 20+ page biography of Frank R. Paul. This is then followed by the actual Space Opera main section which includes:

For the first time there will also be a new segment covering the first sf fan clubs:

As for the progress of FP over the next 47 volumes, I know it sounds insane, but I am committed to taking this as far as my ticker will keep beating. My goal is to get to the point where I am producing two volumes per year. … I know it’s been eight years between volumes 1 and 2, but I only started volume 3 in mid November of last year, so that means I can knock off a 150 page volume in about 10 months. And I am doing this alone and with a full-time job to boot. In another two years I hope to retire, then I can really start pumping these books out. So the future looks bright for this series.