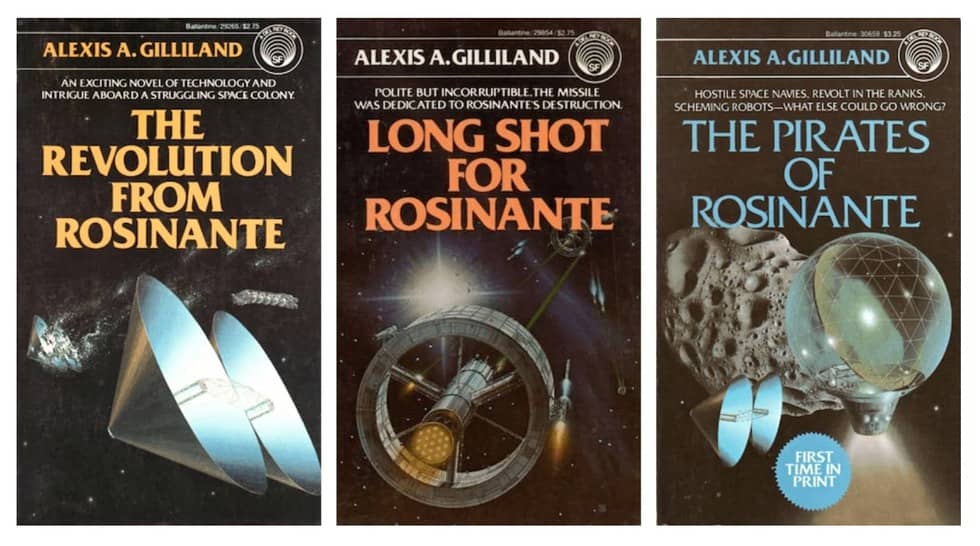 It’s good to know there are other writers out there who obsess over vintage paperbacks the way I do. Well, there’s Rich Horton and James Davis Nicoll, anyway. And I enjoyed James’ thoughtful Tor.com article this week on the long-forgotten Rosinante Trilogy by Alexis Gilliland, published in the early 80s by Del Rey. Here’s his take:

Gilliland also had a lot of fun drawing on stock SF ideas and taking them in directions other authors of the time did not. Cantrell is, among other things, a deconstruction of those marvelous old-time SF engineers who never saw a cool idea sketched on a napkin that they did immediately put into effect without ever considering the ramifications… I don’t know why these books were not more popular, why they are not better known, or why there has been no new Gilliland book since the 1990s. The books’ brevity might have worked against them. Only one is more than 200 pages and the other two are closer to 185. They’re also remarkably eventful books: there is about a thousand pages of plot crammed into less than 600… they were fun and innovative in many ways. For those interested in judging for themselves, at least they are back in print.

Read the whole thing at Tor.com.

Another set of books that I never read, but I’m about 99.4% certain I saw at least SOME of them on the paperback spinners at the public library back in the day.

I saw these in bookstores back in the day, but I never picked them up. They looked a little hard-science for me. I was more of an adventure SF guy in those days (and still today, now that I think about it).