I’m a sucker for Robin Hood stories, and that’s probably why I bought Clayton Emery’s Tales of Robin Hood in 1988. Well, that and the fact that I thought it was an anthology. It’s actually a novel, a magical take on the legend of Sherwood Forest, with witches, demon boars, black-robed monks, and a Robin “attacked on all sides by sorcery and sword.”

Clayton Emery had a steady career as a TSR author in the late 90s, producing a series of Forgotten Realms books including the Netheril Trilogy (1996-98) and the third novel in the Lost Empires series, Star of Cursrah (1999), plus six Magic: The Gathering titles, including the Legends Cycle (2001-2). Tales of Robin Hood was originally published as a paperback by Baen and pretty much vanished without a trace, until iUniverse reprinted it in 2002 under the title Robin Hood and the Beasts of Sherwood. It caught on with modern readers in the new incarnation, and was warmly reviewed by a new generation of readers.

[Click the images to take from the rich and give to the poor.]

This is an absolutely wonderful tale of Robin Hood, a book for the general reader as well as the serious Robin Hood scholar. In Emery’s novel we are privy to the thoughts of the animals of Sherwood as well as the Merry Men (and Women). The battle scenes are particularly violent (after all, it is set in the Middle Ages) and there is a dose of fairy magic for the fantastically inclined reader. But most of all, this Robin Hood has all the swashbuckling zest of an Errol Flynn movie. The “swinging from the trees” episode is particularly funny. This is the best new Robin Hood tale to be published in quite some time.

But my favorite commentary comes from Lorna Mittelman’s 3-star review.

Robin Hood and the Beasts of Sherwood is a delightful romp and adventure in still-ancient Sherwood Forest. Emery has woven together many elements, not just from the early Robin Hood tales and their later variants, but also elements of magic and a wonderful rendering of the forest creatures’ worlds from their perspectives. There are also stories within stories of Robin Hood in the Holy Land during a Crusade.

Robin Hood’s world is created here through the lens of modern attitudes and for the most part, the combination succeeds. There is a sense of ’60’s communal family life with several of the band married and with children, living in cottages but holding the group’s goods in common. Tasks are also less rigidly separated by sex. Men do a fair amount of parenting and women are not averse to being crack archers in both contests of skill and actual fighting… This is Robin Hood for grownups who have never quite relinquished their childhood. 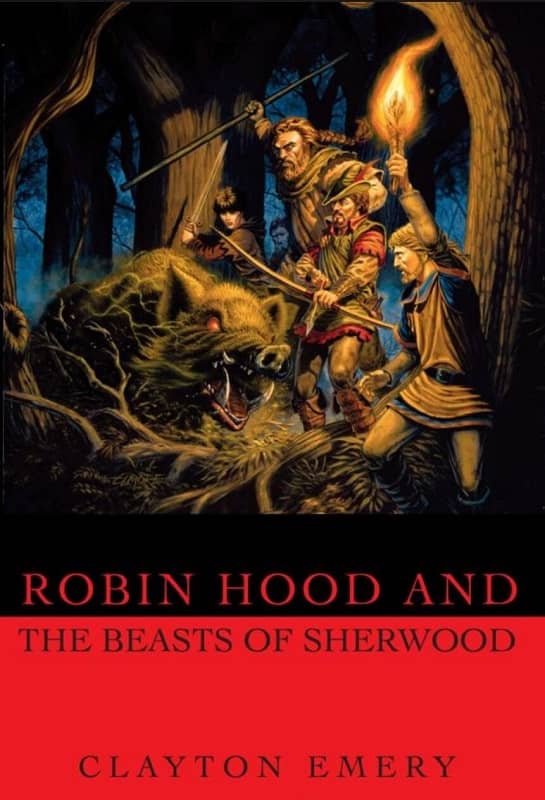 Robin Hood and the Beasts of Sherwood (iUniverse reprint, 2002)

Tales of Robin Hood was published as a paperback original by Baen Books in April 1988, and reprinted as Robin Hood and the Beasts of Sherwood by iUniverse in 2002. It is 309 pages, priced at $3.50. The cover is by Larry Elmore.

I’ve unintentionally started a robin hood novel collection (through gifts from family.) I tried to read this in 2012ish and I didn’t enjoy it . I only made it about 60 pages in.

I regret selling it now (in my big moving sale.) I didn’t have most of my other robin hood books yet and had no intention of starting a collection.

I could have sworn you already made a post about this book but i can’t find it in the archives. Maybe i’m thinking of Sherwood by Parke Godwin

Glenn — I’m constantly forgetting what books I’ve already covered. I spent two hours on an article on Edgar Pangborn’s DAVY only to discover I’d done one just two years ago!

The DVD is long out of print, but if you start going through garbage cans and dumpsters and landfills you’ll eventually find one. And no, you can’t have mine.