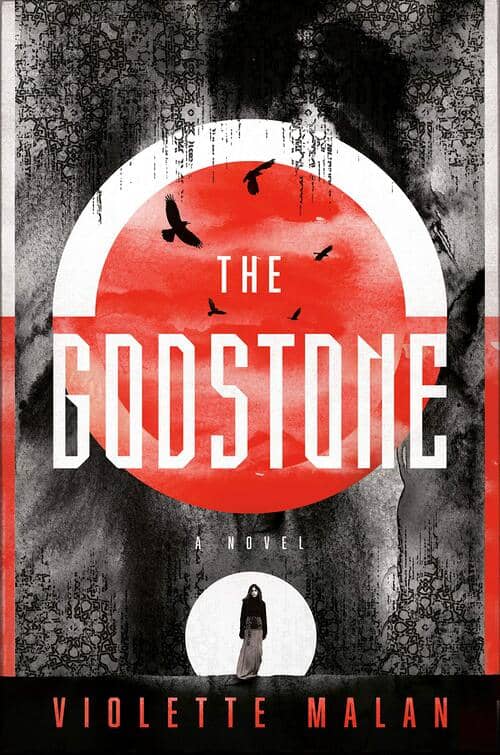 Violette Malan will be familiar to many of you. She’s the author of the acclaimed Dhulyn and Parno series of modern sword & sorcery novels, and The Mirror Prince fantasy series. She was also our Friday blogger here at Black Gate for many years.

Her new novel The Godstone vaults her into the front ranks of modern fantasy. Publishers Weekly raves that it “transports readers to an exciting world of high-stakes magic,” and Kirkus Reviews calls it “An original, enigmatic fantasy about reluctant heroes drawn into a quest to save the world.” It’s the launch of a major new series, released in hardcover by DAW in August. Here’s all the details.

The Godstone is the tale of a tenacious healer who finds herself drawn into a web of secrets and dangerous magic that could trigger the end of the world. Here’s the publisher’s description.

Fenra Lowens has been a working Practitioner, using the magic of healing ever since she graduated from the White Court and left the City to live in the Outer Modes. When one of her patients, Arlyn Albainil, is summoned to the City to execute the final testament of a distant cousin, she agrees to help him. Arlyn suspects the White Court wants to access his cousin’s Practitioner’s vault. Arlyn can’t ignore the summons: he knows the vault holds an artifact so dangerous he can’t allow it to be freed.

Fenra quickly figures out that there is no cousin, that Arlyn himself is the missing Practitioner, the legendary Xandra Albainil, rumored to have made a Godstone with which he once almost destroyed the world. Sealing away the Godstone left Arlyn powerless and ill, and he needs Fenra to help him deal with the possibly sentient artifact before someone else finds and uses it.

Along the way they encounter Elvanyn Karamisk, an old friend whom Arlyn once betrayed. Convinced that Arlyn has not changed, and intends to use Fenra to recover the Godstone and with it all his power, Elvanyn joins them to keep Fenra safe and help her destroy the artifact.

Here’s a taste of that Kirkus review.

When Arlyn gets the letter asking him to come help open his late cousin’s vault, he knows something is wrong. For one thing, Arlyn doesn’t believe Xandra is dead. And even if he were, he’d never want his vault opened because there’s something dangerous inside. So Arlyn must go to the City and secure the vault. His friend Fenra, a healer, will go with him—and try to uncover what Arlyn isn’t telling her about this artifact he claims is powerful enough to un-Make the world… Well-drawn characters and a quest that’s eventually revealed to be as epic as they come add depth to the story, but the standout here is this strange, highly original world. Exposition is so minimal that it does take a while to really understand what’s at stake, but the unusual worldbuilding and air of mystery are enough to draw the reader in.

The Godstone was published by DAW Books on August 3, 2021. It is 304 pages, priced at $27 in hardcover and $14.99 in digital formats. Cover design by Faceout Studio/Jeff Miller. Read an excerpt here.

See all our recent coverage of new release by BG Staff here.

sounds great.
i somehow missed the Dhulyn and Parno books so i went and picked up the first which for anyone interested is on sale for 3 bucks (on kindle) on Dec 17 2021

Mr. O’Niell, have you used or thought about using referral links for the books you and others talk about in these articles, i dont know if it would bring in much, but i feel like it would be a good way for me to give a little back. some find it tacky i guess, but i dont mind it especially when someone is giving me interesting things to read etc.