The Magic Toyshop, first released in 1967, was Angela Carter’s second novel. She eventually published over a dozen novels and collections between 1966 and 1992, when she died of lung cancer at the much-too-young age of 51. Three decades later she’s still remembered as a feminist icon and master of magical realism; in 2008 The Times ranked her 10th in their list of “The 50 greatest British writers since 1945.” 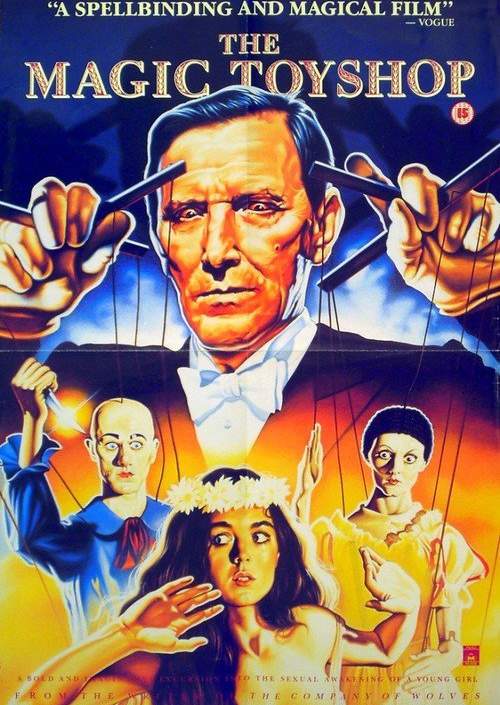 The Magic Toyshop was made into a 1987 TV movie starring Caroline Milmoe and Tom Bell, and directed by David Wheatley.

My favorite contemporary review is by Evie Wyld for The Guardian, who says, “The Magic Toyshop changed everything.”

The Magic Toyshop by Angela Carter was the first book I read at school that seemed to make some kind sense of my life. I was 15, and… reading the first page of The Magic Toyshop was revelatory. My bad, bald self-portraits began to make sense. I was trying on other skins, attempting to fit comfortably into my own. The story’s protagonist, Melanie, discovers her own body at the age of 15 in a way that completely scandalised our English class….

It is often the magical, fabular aspects of Carter’s stories that people focus on, but in The Magic Toyshop I responded to the way she blended this with a clear-eyed realism about what it was to live in a female body. Carter seemed to be saying something about female experience, that it had a different kind of relationship to reality than those breezy male characters I had previously met, confident in their role as subject and point of view. Melanie becomes aware of her body and sexuality as part of a process of literal discovery in which she compares it to America. Rereading this book, I am struck by this metaphor, the female body as colonised land, site of projected meaning, violence and plunder…

Melanie is only able to understand her body by turning it into another kind of object, but in doing so she understands this is a power. As a young girl experiencing that moment when your body is both the vessel for your self but suddenly, as if overnight, also a thing, a collection of objects for men to look at, assess, interpret and desire, Carter’s story seemed to speak directly to my life. That this was an experience from which art could be made felt like someone had opened a door somewhere.

My English teacher, sensing a student pricking up her ears for the first time, took me one Saturday to hear Carmen Callil, Carter’s best friend and editor, talk. She told us that “Angie” couldn’t spell. That was perhaps the most encouraging thing I’d heard from anybody, that the gridlines of schoolwork didn’t mark the limits of ability. In her introduction to the 1981 edition, Callil writes that “all over the world are literary incendiary bombs planted by Angela, and in Britain, young writers whom she encouraged.”

The Magic Toyshop was published in paperback by Dell in 1969. It is 189 pages, priced at 75 cents. The gorgeous and disturbing cover is by Michael Leonard.

I read all Carter’s stuff in one long binge some time back in the Eighties. I remember reading ‘The Magic Toyshop’ at one point, but nothing about the story itself. I tried reading her again a few years back and just found her prose very over-wrought (although I can appreciate how she must have seemed like a breath of fresh air, back in the day).

I have several Carters on my To Read List. The only thing by her I’ve actually read is her postapocalyptic novel Heroes and Villains, which I thought was very strong; in fact, I consider it one of the best “after the bomb” novels I’ve ever read.