I found Stephen Aryan’s new novel The Coward on one of my recent expeditions to Barnes & Noble, and it followed me home.

Loath as I am to admit it, I think a big part of the reason was that when I picked up the book it fell open to the map, which reminded me instantly of the exciting solo RPG gamebooks of my youth. Have a look and see if you agree. 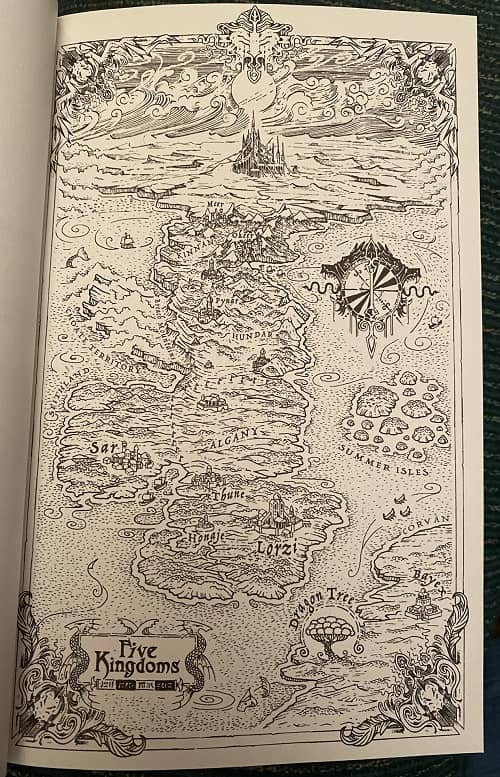 The awesome interior map for The Coward. Do you draw your sword
(page 9), put on your wizard cap (page 66), or find the cartographer and
bribe him for a back entrance to that creepy ice castle? (page 121)

The book isn’t just the cool map. Apparently it’s a real novel, with rave reviews (SFX Magazine: “Magnificent… Exactly the sort of breathless adventure we need after a lockdown year”) and everything. Here’s a snippet from the feature review by Sam Tyler at SF Book Reviews.

Ten years ago, the land was threatened by an eternal winter. A band of hardened warriors headed North to kill the Ice Lich. Along for the ride was the inexperienced Kell, who refused to leave their side. Kell was the only survivor. He may be known as a legend, but fame does not stop the nightmares and all he wants to do is be left alone to farm his land, but the last two seasons have been chilly and there is only one man that the King wants to head back up North…

This is a book about a man reflecting on what has gone before, it is not about the events themselves. The years weigh heavy on Kell and that gives the book a moodier feel…. The Coward is one of the most enjoyable fantasy novels I have read in recent years. It has all the action and comradery of a classic fantasy outing, but it is told with a cynicism that is frankly refreshing. Who like a do-gooder hero anyway? Give me some one a little messed up like Kell any day.

The Coward is the opening novel in the new series Quest for Heroes; it incudes an 12-page excerpt (the complete text of Chapter One) from the sequel, The Warrior.

There is a reason that I treasure my copy of J. B. Post’s An Atlas of Fantasy, and maps like this one are pretty much that reason. Even if I did not read the novel, I could easily stay lost on the map for hours and hours. (What kind of fruit *does* a Dragon Tree bear??)

Love the map! However, I do wonder (and I’m no doubt being terribly unfair here, I admit) if this isn’t just a mash up of Game of Thrones (Ice Lich?) and Flashman (lucky coward). I suppose the only way to find out is to read it!

Actually…. a mash-up of Games of Thrones and Flashman sounds great to me!