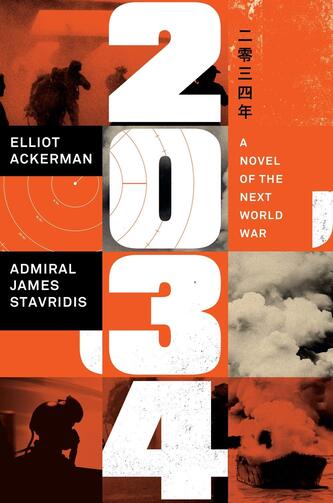 I’m hearing a lot of buzz about this book.

I first heard about it in Andrew Liptak’s March newsletter (the “15 science fiction and fantasy books to check out this March” installment), in which he wrote:

I’m a big fan of military fiction, especially stuff that’s close to the horizon when it comes to predicting the future, like P.W. Singer and August Cole’s Ghost Fleet. This new novel comes from Elliot Ackerman and Admiral James Stavridis, and is set nearly a decade from now, chronicling how a world war between the US and China might occur.

I’ve been reading an advance copy of this, and it’s a chilling read, one that looks at the plausible future when it comes to cybersecurity, military hardware, and geopolitics.

Wired devoted an entire issue to an excerpt of the novel, which includes the first six chapters.

Wired in fact calls it “A rippingly good read… even cautionary tales can be exciting, when the future we’re most excited about is the one where they never come true.” Kirkus says it’s “A frightening look at how a major-power showdown might race out of control… This compelling thriller should be required reading for our national leaders.”

2034 is written by two former US military officers, and the publisher describes it as

A chillingly authentic geopolitical thriller that imagines a naval clash between the US and China in the South China Sea in 2034 — and the path from there to a nightmarish global conflagration.

Takes me back to those Sir John Hackett “Third World War” books. That I feel nostalgic for the Cold War tells you about where we are right now!

I lost my appetite for wired magazine about 10 or 12 years ago. I’ll wait for the novel’s release and I can read some other reviews on it. I read the first chapter before Wired insisted I sign up for more content. It wasn’t particularly gripping.

Load of rubbish. Everyone knows the earths surface is radioactive and humanity is barely surviving in the Russian metro by 2033. They should’ve read Glukhovsky first! What is it about the year 2034? Glukhovsky’s sequel is Metro 2034 too.

> Takes me back to those Sir John Hackett “Third World War” books.

Oh man — I forgot all about those! I read THE HUNT OF RED OCTOBER, but that was as far as I got into the section of the 80s neo-con military fantasy section of the library…

You should read Red Army by Ralph Peters. That was a gripping novel from the Mid eighties and I was in the Canadian Army at that time. I am what you would call a veteran of the Cold War.

> I read the first chapter before Wired insisted I sign up for more content. It wasn’t particularly gripping.

Readers seem pretty divided on this one. I note the top reviews on Amazon are all 1-star….

> Everyone knows the earths surface is radioactive and humanity is barely surviving in the Russian metro by 2033.

LOL! Maybe Dmitry Glukhovsky will do the Russian translation. It seems fitting somehow.