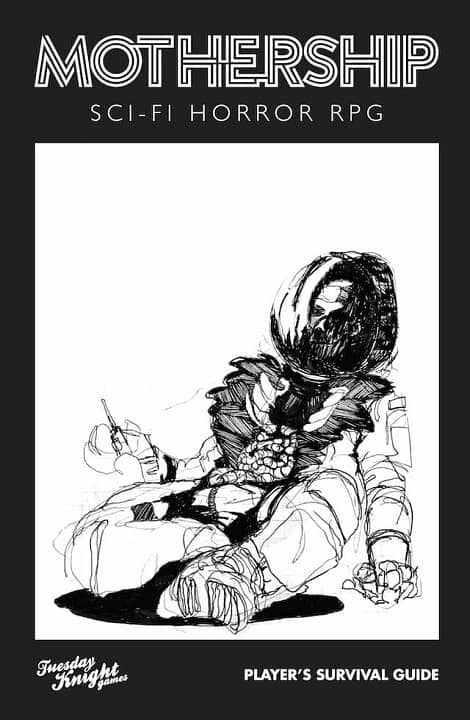 Mothership, by Tuesday Night Games and written by Sean McCoy, started making the rounds in beta format in 2018, causing quite a big splash amongst the RPG community. Styled as sci-fi horror RPG, its tag is: “Survive. Solve. Save. Pick one.” In other words, watch out.

Mothership falls into the OSR-style of game. OSR, which stands for Old School Revival or Old School Renaissance. OSR RPGs take their cues from the earliest days of the hobby, often with a focus on play style and use of Open Gaming License (OGL). In my mind, the former is the more important. OSR games are often as much about player skill as they are about rolling dice. The classic difference in this is that players often say, “Check for traps” before entering a room. The player then rolls an Awareness skill or like check. If they pass, they confirm the presence of traps or not. This is very mechanical.

OSR style play will ask the player to describe how they are checking for traps, and rather than relying on a detailed set of rules, the GM will “simply” establish the check. This “rulings over rules” is another hallmark of OSR games.

Interestingly, while characters are a big focus in modern RPGs (something I wholeheartedly endorse), OSR games often find ways for the players to engage in the game through the character in more meaningful ways because they eschew the “check x, roll y” mechanical formula. 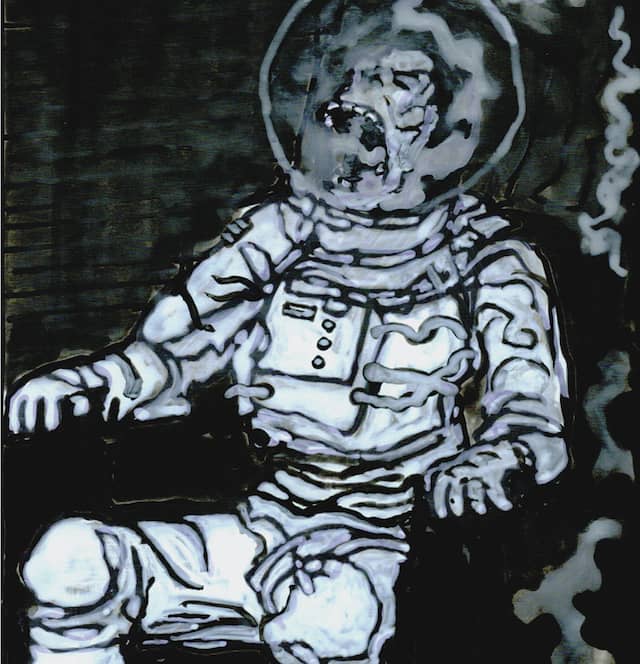 Mothership places players into space, gives them difficult challenges to face, and makes it tough to survive. It is written in ‘zine format — which also hearkens back to the early days of RPGs and self-publishing 5-1/2” x 8-1/2” sized magazines with rules, adventures, and so on.

The basic mechanic of the game is the D100 system, which players of Call of Cthulhu, Delta Green, Basic Role-Playing, and others will recognize. That system in and of itself is easy and intuitive to use. Most rolls the players make are rolling two ten-sided dice, one of which represents the 1s digit and the other of which represents the 10s digit. Stats and skills provide a the number under which the player must roll. If a player has a 30 in Strength and they need to bust through a heavy door, they need to roll 30 or less. This is also a percentile-based mechanic and it is easy to see the odds of a player succeeding at a task or not. Skills add percentages up. Trained skills add 10%, Expert skills add 15%, and Master skills add 20%. It is also very easy for a GM to adjust the difficulty of a task by increasing that player’s success up or down. Perhaps that door has already been based by a sledgehammer, and the GM says it will be easier to break down because of that and increases the player’s odds by add 20% to the task. This can work the other way of course. 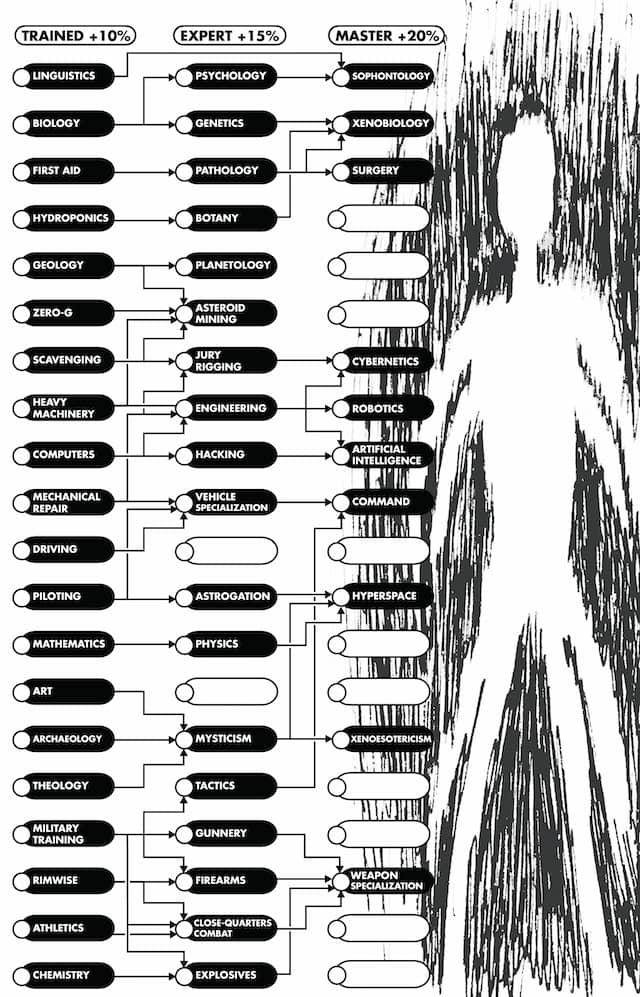 While it is rules-light, it also has a good amount of meat on its bones to support one-shot adventures and longer campaigns. Characters are measured by four primary attributes: Strength, Speed, Intellect, and Combat. Characters then have up to 48 skills, though these are divided between Trained, Expert, and Master levels.

Player choose among four classes for their characters: Teamsters, Scientists, Androids, and Marines. Players roll for the attribute rankings. Each class has a way they deal with Stress and Panic (a bit more on those in a bit) along with starting skills and skill points.

The character sheet is ingeniously designed to allow you both to generate a character without reference to the rules and remain functional. 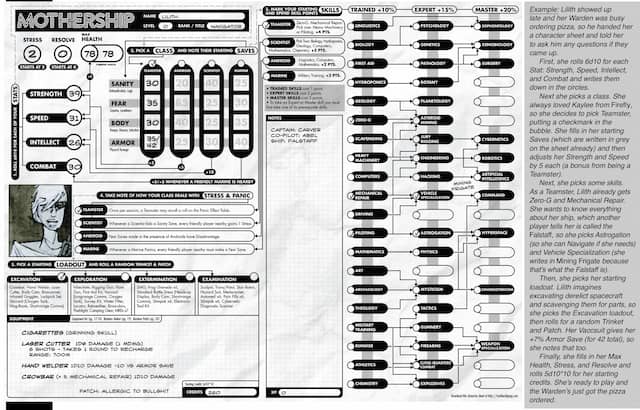 Additionally, each characters has a starting number fo the four Save rolls: Sanity, Fear, Body, and Armor. As the game notes,

“Oftentimes in Mothership you won’t have control over what happens to you. Strange organisms will attack or invade your body. Terrifying horrors will surprise you from the void. You’ll find or become aware of some ancient knowledge that is beyond your comprehension. Whenever these kinds of things happen you make a Save.”

Players will not be asking to make these rolls — they are not like skills. The Warden (the term for the GM) will ask players to make the rolls when they are attempting to resist being terrified or injured, or deal with the horror of the chaos. If a player fails the save, they suffer not only the consequences of that failure (being injured, contracting a deadly disease, and so on) but they also suffer at least 1 Stress point. If they Critically Fail a save, then they also have to make a Panic Check.

Stress is a key component of the game. You can reduce it with rest, but — let’s be honest — many of the situations our players will find themselves in will not offer much opportunity for rest. This is a sci-if horror game after all. 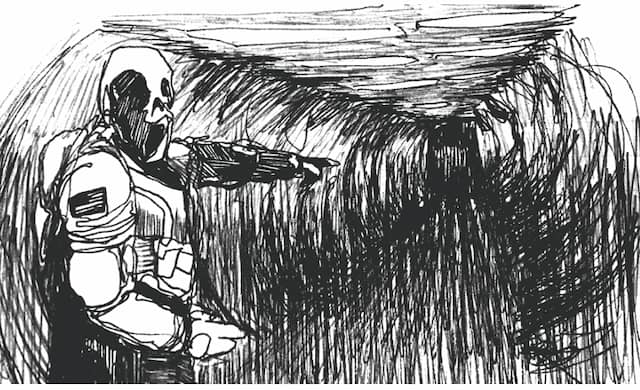 As Stress builds up, it is more and more challenging to not panic, and this is where the Panic Check comes in. The Warden determines when the Panic Check checks are necessary, but the book provides some examples: seeing a crew member panic, encountering an alien for the first time, seeing a crew member die, and so on. In this case, the player rolls two ten-sided dice (2D10)  and adds them up (so not the D100 roll). If the roll is above the player’s current Stress, they do not panic and their Stress drops by 1. Otherwise, they get to roll on the Panic Effect table, which is another 2D10 roll and adding the current Stress level. At the lower end of the table, some results are potentially positive — Laser Focus: Advantage on all rolls for 1D10 hours.

But only a few like this are present on the table. Instead, you will find more problematic results:

The game includes starships. They have the stats Armor, Combat, Intellect, and Speed. Ships are easy to build by picking a class and adding modules. Each class has certain required modules and minimum and maximum hull size. Each module requires so many hull points, so as you add modules, you increase the expense of the ship along with packing in various functionality.

Mothership has kept starship combat simple and lean and largely the same as personal combat. The book outlines the differences in two pages, the highlights of which are that ships use their Speed stat for figuring out distance between ships and completing maneuvers, the level of damage is way way higher, and instead of hit points they have hull points. Ships also have a Critical Hit Effect table. Players use this when the ship takes critically fails an Armor save roll, a ship’s hull points are reduced to 75%, 50% or 25% of their total, and a few other things. In general, these ship critical hits disable systems or make using systems more difficult. Some do have more potentially catastrophic results (Fuel Line Destroyed means the ship will be no more in 1D10 turns).

Mothership provides mechanics for improving characters along with hiring mercenaries to provide some crew support. Lists of equipment and weapons are included. The game, despite its small page count and size, is a complete game. 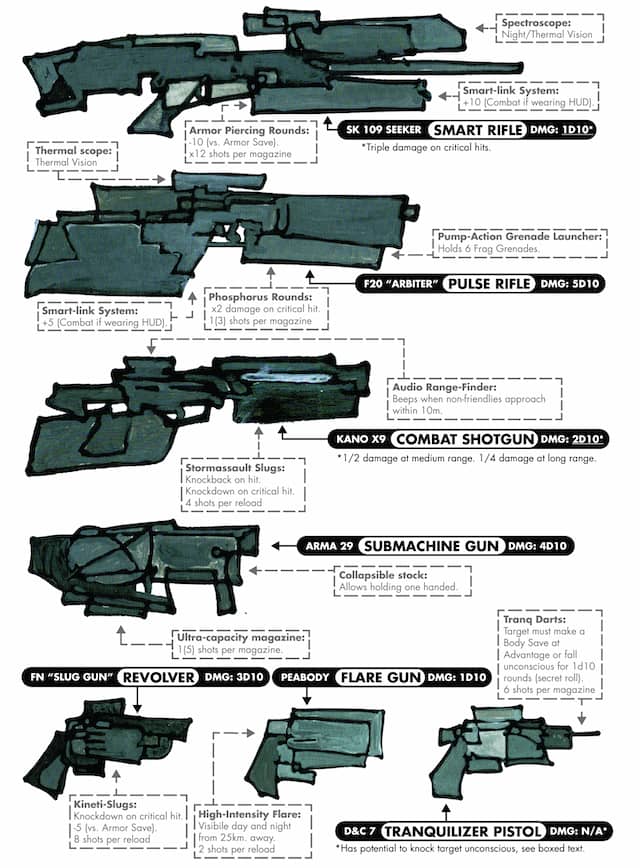 While you will not find the traditional chapter on running the game, how to be a Warden and adjudicate what needs to be rolled or not, this is on par with other OSR style games. It presumes the Warden and the players know what an RPG is and how to engage with it. The game also does not include NPCs or villains with stats, though the mercenaries can be used easily enough.

Overall, the game is deadly. Character hit points are based on their Strength times 2. The example sheet in the game shows a character with 78 hit points. A revolver does 3D10 damage. A pulse rifle does 5D10 damage. While the max will not be hit most of the time, that could still be a lot of damage to a person and quickly. More importantly, however, is that the Stress mechanic will begin to take hold. Getting hit and getting hurt require Stress rolls. Those are going to fail occasionally. The game overall is geared to a increasing that level of Stress, inexorably building. This is what gives the game its horror moniker. While not explicit, both Alien and Aliens are clear inspirations for tone. 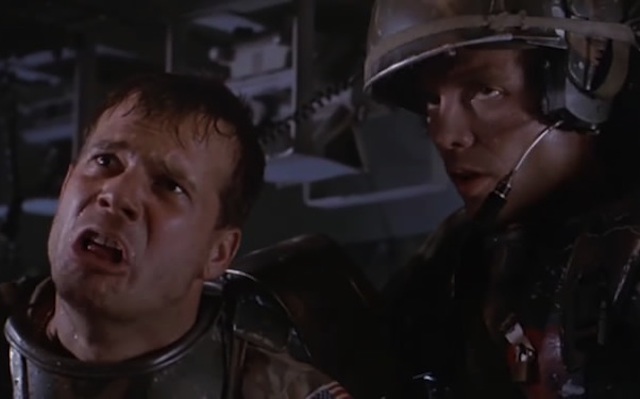 I can see The Thing living amongst the text as well, and the game seems well suited for one-shots where players know and accept that their character’s fate may be — gulp — to not make it. Some characters will falter and stumble like Hudson in Aliens, eventually overwhelmed by the xenomorphs. Others will persevere and, maybe, even triumph like Ripley. Either way, they’ll be changed. 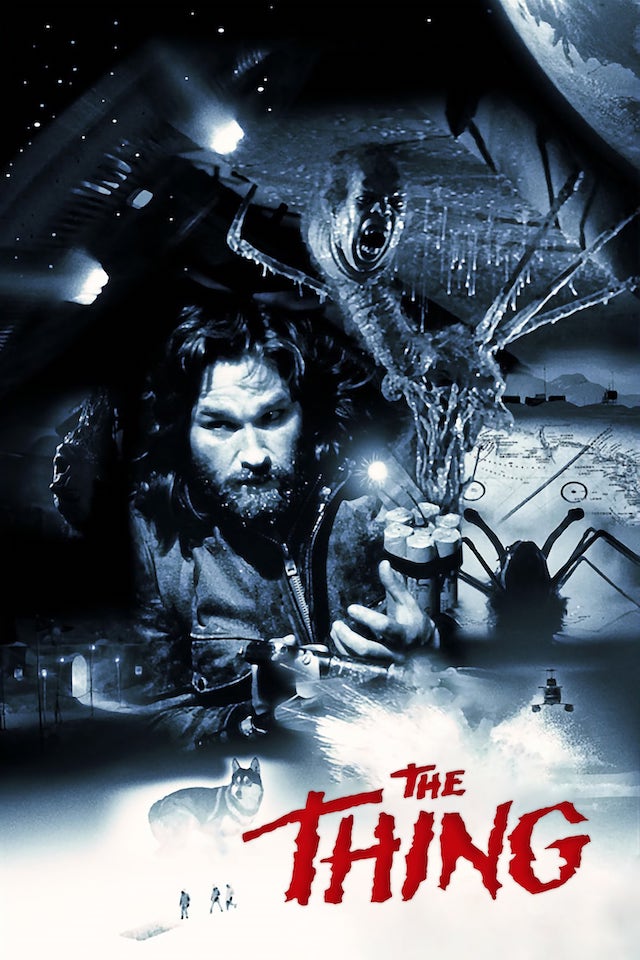 Mothership proved popular after its introduction, and Tuesday Night Games has released a a few follow on ‘zines: Dead Planet, A Pound of Flesh, and Haunting of Ypsilon (the last a pamphlet, one-shot scenario). Many other third-parties have published additional scenarios and add-ones for the game, so a thriving community exists around it, another hallmark of the OSR. 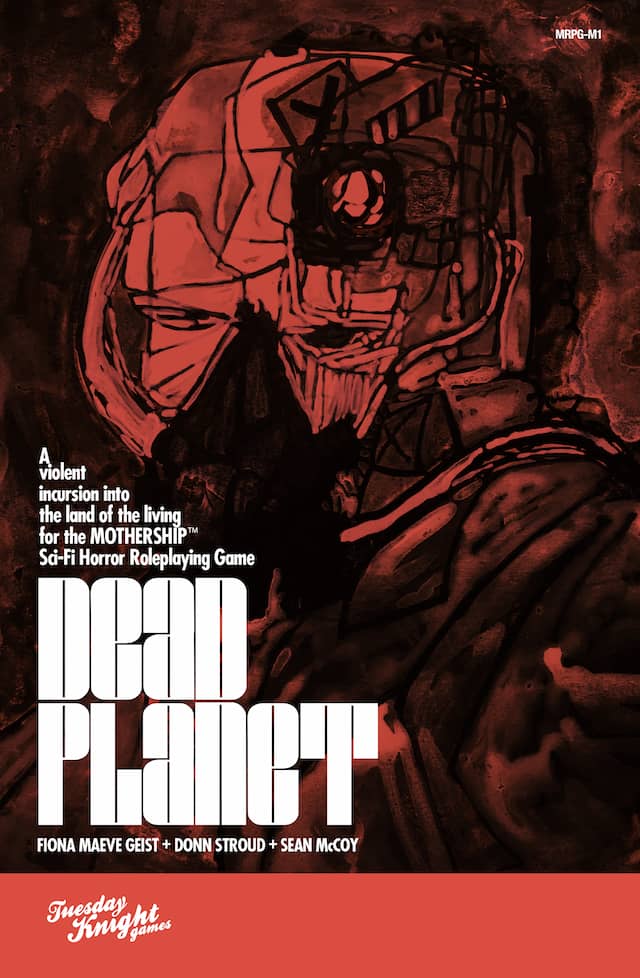 Mothership is an easy recommendation. The mechanics are simple but contribute to the feel of the game and also being hackable. Adding additional mechanics for things like cyberware, more weapons, and so on are easy enough (and some exist from those third-parties). Pick up this game. See if you can survive the horrors with your life or sanity. Either way, it’ll be wicked fun.

You can get a copy of Mothership at Tuesday Night Games.

Patrick Kanouse encountered Traveller and Star Frontiers in the early 1980s, which he then subjected his brother to many games of. Outside of RPGs, he is a fiction writer, avid tabletop roleplaying game master, and new convert to war gaming. His last post for Black Gate was Twilight: 2000 — Roleplaying in a Post-Nuclear Holocaust World. You can follow him and his brother at Two Brothers Gaming as they play any number of RPGs. Twitter: @twobrothersgam8. Facebook: Two Brothers Gaming

If people are into this: there are some pretty nifty Zines published on Kickstarter in this years Zinequest.

For example: Dying Hard on Hardlight Station (combining ideas from Die Hard and Alien) and Desert Moon of Karth (a space western setting).

Jimmy, thanks for the note. Yes, there are some awesome ‘zines with Zinequest this year!

I’ve never heard of it before, but I’m very intrigued. Is it a Kickstarter thing?

Zinequest is a Kickstarter thing. This year is the biggest yet. Tons of stuff for Mork Borg, Mothership, and others.