So, last year, as the Pandemic settled in like an unwanted relative who just came for a week and is still tying up the bathroom, I did  a series of posts for the FB Page of the Nero Wolfe fan club, The Wolfe Pack. I speculated on what Stay at Home would be like for Archie, living in the Brownstone with Nero Wolfe, Fritz Brenner, and Theodore Hortsmann. I have already reposted days one through fifteen. Here are days eighteen (April 8) and nineteen (April 9). It helps if you read the series in order, so I’ve included links to the earlier entries. I enjoy channeling Archie more than any other writing which I do.

After lunch, I suggested that Fritz prepare some food for Doc Vollmer. I suspected he was volunteering at a local hospital, in addition to treating panicked patients in his practice. I felt a bit guilty, realizing I hadn’t checked on how he was doing at all. Fritz agreed we should feed him. Inviting a doctor over to dinner during a Pandemic was a terrible idea, of course. So Fritz planned a dinner that I could take down and leave on their porch. Helen Gillard had gotten married, and Julia Fellson was now his secretary and assistant. I told Fritz to make enough for both of them. I’m sure she could use a nice meal as well.

I called Julia later and found out that the doctor would be home around nine o’clock, if he didn’t get stuck at the hospital, which was often the case. She said that he was still healthy, but clearly running out of energy. Lately, she had gotten insistent he come home and get some rest, since he began seeing patients at 8 AM there in the brownstone. I thanked her and gave Fritz the update.

About 8:45, I called Vollmer’s office and got Julia. She was just closing up shop. He’d gotten home earlier than usual, but patients had shown up. I told her not to leave and that she was about to get a present on her doorstep. A picnic basket of Fritz’s food, with a bottle of wine and a note, was ready to go. He only lives a half a block away, so I was there in a shake. Julia was watching from the bay window in the front. I waved, showed her the basket, put it on the stoop, and blew her a kiss. She laughed and cried. I couldn’t imagine the daily strain she was under. I started walking back and heard the door open. I turned and she waved and said, “Thank you Archie, you’re a dear. And so are Fritz and Nero Wolfe.”

I thanked her for her hard work and went home. Sometimes, making someone feel better makes you feel good.

Fritz wanted more Bogart. Who was I to argue? I decided to go with a war movie. I thought about Action in the North Atlantic, and Passage to Marseille, but I wasn’t crazy about either movie. Across the Pacific was an exciting wartime spy movie, but I was going to have him watch that with the other Mary Astor film. If you don’t know that one…I don’t know what. You should.

I had decided on Sahara, in which Bogie is a tough-as-nails captain of a tank crew in Africa. But then I remembered Battle Circus. This movie was M*A*S*H before M*A*S*H. Though without the comedy. It’s a good drama/love story, and Fritz liked it. I imagine Doc Vollmer and medical personnel felt like they were working under battlefield conditions, like Bogie did in this one.

I was laying in bed, thinking about how long it had been since I’d worked. I do a lot of things for Nero Wolfe, but I’m a private investigator. I have a license from the State of New York that even says so. And being a good detective contributes to my sense of self-worth. For weeks now, I wasn’t being a detective. Trying to cold start a cold case hadn’t done me any good. I might as well have tried to prove who was involved in The St. Valentine’s Day Massacre. I needed to call Cramer and convince him to let me work on something with him, or Purley. A detective has gotta detect.

My mom called this morning while I was sitting at the breakfast table in the kitchen, eating some of Fritz’ wheat cakes. My aunt Pol died from the virus. She was 84 and mostly healthy for her age. ‘Pol’ wasn’t short for Polly, or a version of Paula. Her given name was Polgara. She and Uncle Eddy owned a farm outside of Xenia when I was growing up. I would spend a week there every summer. It was a good week for a kid who liked the outdoors. Elmer passed away about ten years ago. I know she’ll be happy to join him again. And he’s been waiting to tell her to “Close the front door, woman. This is the house, not the barn.” Damn Covid to hell.

Doc Vollmer called a little later. He knew that Wolfe was up in the plant rooms, but he also knew that I was behind the care package, with Fritz’ help, and likely Wolfe’s approval. He was very appreciative. And not just for himself. Julia was putting in long hours, keeping the office together, and she greatly enjoyed Fritz’ cooking.

I told him that once the world was back to normal, he and Julia could come for dinner one evening. He said he would love to talk longer, but he had a full day’s worth of people to see. Some of his patients had the flu, and as always, it could be dangerous. But with the coronavirus, fear was rampant. I told him to stay safe and he rang off.

I mentioned that Theodore ate dinner with us on Tuesday. Tonight, after dinner, I convinced Wolfe to let me make the Saturday lunch. He knew I was going to keep at him, so he gave in easily, but it was contingent on Fritz’s approval. Like I didn’t already know that. 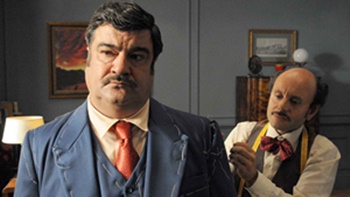 Fritz and I watched The Maltese Falcon. Now, it might seem like I’m switching topics, but I’m not, as you’ll see. I think it’s the perfect private eye film. It’s got everything. I’m not much into novels, but a lot of people think it’s the best private eye book, too. So, there you go. Fritz loved the movie, of course. And with him in such a good mood when it ended, I brought up my Saturday lunch plans. He was…reluctant.

But I talked him into it by asking him to make biscuits. And also agreeing that he could remain in the kitchen with me throughout. I would have preferred he show me where everything was, and then go down to his room in the basement. Maybe he was afraid I’d use a stainless steel knife which I would smuggle in from the outside. Fritz doesn’t allow stainless steel utensils of any kind in his kitchen. Period.

It also helped that I told him if he wouldn’t let me do it on Saturday, I’d just have to make lunch on Sunday. The look of horror on his face at the thought of me making an Easter Sunday meal was priceless. I’ll treasure it forever. Now, having explained that I used The Maltese Falcon to get him in a good mood for my lunch proposal, back to Bogie.

There was some interest on Warner Brothers’ part to have their high profile star, George Raft, play Sam Spade. Raft said he was promised he would only have to make ‘important films.’ And his contract specified that he didn’t have to appear in remakes, and this was the third attempt at bringing the novel to the big screen (you can ignore the first two). So, he wasn’t interested. Also, young John Huston had been a successful screenwriter for Warners, so they told him he could make The Maltese Falcon for his directorial debut – they were throwing him a bone. Raft didn’t want to work for a rookie director: strike three.

Huston had written the script for High Sierra, which helped launch Bogart’s career. He only wanted Bogart for Spade and was happy that Raft wasn’t interested. So am I. There’s a good essay out there about how Raft’s poor career choices helped make Bogart a superstar. That Byrne guy I mentioned before wrote it. Raft needed a manager. And a smaller ego.

Anywhoo, Bogart couldn’t be better in his true break-out role. It was Sidney Greenstreet’s first movie, after a career on the stage. And of course, Peter Lorre is excellent. Huston hit a home run in his first at bat. There would be quite a few more for him.

We’ll watch Across the Pacific next. Mary Astor had the female lead in that one, too. She never did much for me. Either as a romantic interest or a femme fatale. Fritz really liked Sidney Greenstreet, so he’ll get a kick out of seeing him again.

Tomorrow morning I’ll have to make sure we have all the ingredients I need for Saturday.