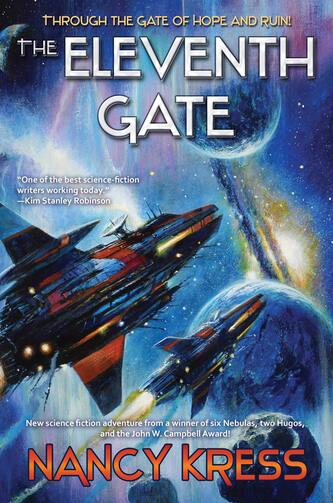 Now here’s an attractive combo: a brand new space opera novel by multiple award-winner Nancy Kress, wrapped up in a gorgeous vision of deep space adventure by Bob Eggleton. You know this book would look damn handsome on your shelf.

I’m not sure how this one managed to slip past me when it was first released in May of last year. (I was probably hiding in my basement from the pandemic.) What’s it all about? Russell Letson at Locus Online fills us in:

The Eleventh Gate… combines elements of space opera with quasi-dystopian political conflict and intrigue among a collection of extrasolar colonies. A century and a half earlier, the discovery of a set of mysterious interstellar gates allowed waves of emigrants to escape an Earth ravaged by ecological collapse and global war: ten gates, eight surprisingly habitable worlds, and three very different sets of refugee-settlers.

Now the Eight Worlds are occupied by their descendants… these societies have gotten along mostly peacefully until the discovery of an eleventh gate sets off a land-rush rivalry that lurches into warfare.

Warring families and philosophies drive this complex science fiction thriller… Refugees from a dying Earth escape via a mysterious stargate leading to the Eight Worlds system. They divide these worlds between three political factions: the totalitarian Peregoy Corporation, the Landry Libertarian Alliance, and the planet Polyglot, a “patchwork of individual nations” and economies. Then a new stargate appears, sparking a race to claim it and whatever world waits on the other side. Ambitious Tara Landry, heir to the Landry Alliance, hatches a hare-brained scheme to prevent the reignited tensions between factions from breaking into war. But when Tara’s plan goes awry, war becomes inevitable… This swift, political story proves a rip-roaring diversion.

The Eleventh Gate was published by Baen Books on May 5, 2020. It is 352 pages, priced at $15.99 in trade paperback and $8.99 in digital formats. The cover is by Bob Eggleton. Read a generous excerpt at the Baen website.