Today, December 21st, is the Winter solstice and the longest night of the year in the Northern Hemisphere. What to do with those long winter night hours? Curl up with a blanket, a warm beverage, and a good spooky book, of course.

My pick for tonight is Donald A. Wollheim’s The Macabre Reader, his 14th anthology, published as a paperback original in 1959 and never reprinted in the US. It’s still considered one of his finest anthologies, even today, and has both a fine reputation and the benefit of a good print run — meaning copies are still very inexpensive. There are plenty of reviews out there; here’s an excerpt from one of my favorites, by Dem Bones at Vault of Evil:

Thorp McClusky – “The Crawling Horror”: Hans Brubaker’s farmhouse comes under attack from a colourless jelly which devours rats, cats and cattle before turning [its] attention to human prey. His beautiful young wife Hilda and the local physician Dr. Kurt are the only people who believe his seemingly insane story and help him secure the place versus the shapeless creeping sludge. All is well until eighteen year old Bertha Brandt turns up on the doorstep in the middle of the night…

Zealia Brown Reed – “The Curse Of Yig”: Oklahoma, 1925. An ethnologists’ researches into snake lore amongst the Native Americans leads him to Guthrie Asylum… [and] the tragic history of settlers Walker and Audrey Davis, whose anxieties over her wiping out a nest of baby rattlers culminate in madness, manslaughter and monster births. A pulp classic with a killer ending, reputedly revised by H. P. Lovecraft.

Inside cover copy for The Macabre Reader (1959)

If you’re like me and appreciate skillful two-sentence reviews, I think you’ll also enjoy the 2010 5-star Goodreads review by Graham.

Is there anything better than a musty paperback of pulp-era horror? I doubt it. Don Wollheim’s The Macabre Reader, from 1959, is a perfect example of that genre… here are my thoughts:

THE OPENER OF THE WAY by Robert Bloch: Bloch’s evocation of a Lovecraftian atmosphere (without stealing any of his monsters) is spot on here, in a story of ancient Egyptian horrors set in a rank tomb deep below the ground. The atmosphere is strong and gripping, the chilly climax uses imagination instead of gruesomeness, and is all the better for it….

IN AMUNDSEN’S TENT by John Martin Leahy: Horror unnatural and alien is alive and well in the Antarctic, in this superb pulp work which covers much the same ground as Lovecraft’s AT THE MOUNTAINS OF MADNESS. However, Leahy’s tale is perhaps even more effective because, in its short narrative, it never shows the alien menace; it just hints at the creature, building suspense and tension and tons of horror… Grand and disturbing stuff that’ll put you off tents for life!

IT WILL GROW ON YOU by Donald Wandrei: The old ‘malignant growth’ storyline is a frequently-plowed furrow, but Wandrei invests his pulpish yarn with plenty of well-structured style, making it an entirely readable and grotesquely entertaining piece. The idea of a miniature person is a nightmarishly ghoulish one, the resulting tale both supremely weird and really rather ghastly…

THE CAIRN ON THE HEADLAND by Robert E. Howard: More ancient horrors from Howard’s night-tipped pen, here mingling together many of his favourite themes : the modern day rivalry and death-hatred between men; the ancient and time-honoured battles between barbarian tribes… and, of course, a horrible demon-creature to show up at the finale… a fine, deeply atmospheric story that holds together extremely well, remaining unpredictable throughout.

The Macabre Reader was published by Ace Books in 1959. It is 223 pages, priced at 35 cents. The cover is by Ed Emshwiller. It has never been reprinted, and there is no digital edition. It has been out of print for over 60 years.

That does look like a pretty solid collection, although I look at the description of “The Crawling Horror” and think to myself, “That sounds kind of *koff*ColourOutOfSpace*koff* familiar …”

I bought this way back in the early ’60s, and I remember how chilling many of these stories were (I was like 12 or 13 at the time). It was scary enough to give me nightmares: in one, the face in the bottom right corner of the cover was chasing me upstairs from our basement. I still have my copy, as well as the follow-up volume: “More Macabre,” which is where I first encountered Charlotte Perkins Gilman’s “The Yellow Wallpaper,” now considered a feminist classic.

> I look at the description of “The Crawling Horror” and think to myself, “That sounds kind of *koff*ColourOutOfSpace*koff* familiar …”

Well, yeah. But to be honest there’s almost an entire sub-genre of space blog stories. From the movie “The Blob” to “Island of Terror” (1966), “The Creeping Unknown” (1955) and “Caltiki the Immortal Monster” (1959)… and I haven’t even touched the pulp magazines yet.

I even love the “space blob” segment in CREEPSHOW (staring Stephen King). I can’t be the only one.

> I still have my copy, as well as the follow-up volume: “More Macabre,” which is where I
> first encountered Charlotte Perkins Gilman’s “The Yellow Wallpaper”

Ah… I forgot all about the second volume! Came out in 1961 with stories by Richard Matheson, H. Warner Munn, Philip K. Dick, and lots of others. I may have to write that one up too. 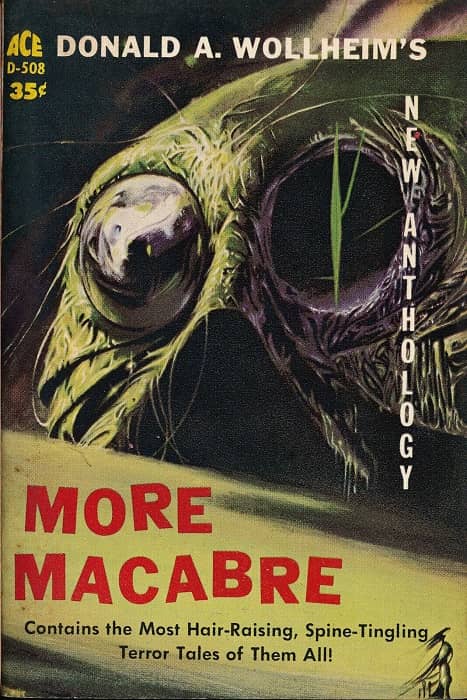 Great stuff!
How I’missing the long gone times when this genre of stories would enchant me and scare me at the same time….