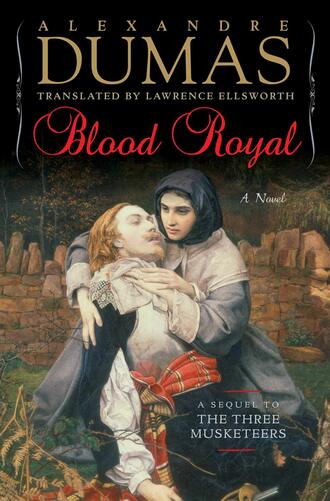 Need a break from obsessively following US election results tonight? I have just the thing: Blood Royal, the latest entry in the acclaimed series of new translations of the Musketeer novels by our very own Lawrence Ellsworth, is on sale today.

I’ve really been enjoying Lawrence’s Cinema of Swords series here at Black Gate. But his day job is even cooler: he’s been bringing Alexandre Dumas’s classic novels of swashbuckling intrigue back into print in exciting and handsome new editions, complete with modern translations.

The latest, Blood Royal, continues the adventures of the valiant d’Artagnan and his three loyal friends. It follows The Red Sphinx and the newly translated The Three Musketeers; here’s what Lawrence told us about it last week.

Blood Royal is the second volume of Dumas’s Twenty Years After; there hadn’t been a significant new English translation of this novel in over a century, which was reason enough to take on the challenge, but the truth is I did it because it was so much fun.

The latest translation in Lawrence Ellsworth’s acclaimed new series of Alexandre Dumas’s greatest adventures is Blood Royal, the second half of what Dumas originally published as Twenty Years After. In this volume all the plots and schemes set up in the previous novel come to dramatic fruition in the kind of exciting thrill-ride Dumas is famous for — while at the same time introducing the characters and themes that form the foundation of the rest of the series, leading to its great climax in The Man in the Iron Mask.

In Blood Royal, the Four Musketeers all venture to England on parallel missions to save King Charles I, pursued by the murderous and vengeful Mordaunt, the son of Milady de Winter, the great villain of The Three Musketeers. Despite all his experience, d’Artagnan is repeatedly foiled by the much-younger Mordaunt, who erupts out of the past to embody the strengths of audacity and cunning that were once d’Artagnan’s hallmarks. Mordaunt has corrupted those youthful strengths, and the older d’Artagnan is no match for him until he is able to pull his former team together again. To do this d’Artagnan will have to become a true leader of men, leading not just by example but also by foresight, persuasion, and compromise. Only then can the team of Athos, Porthos, and Aramis be re-formed in all its might to defeat the specter of their past. Blood Royal is unmatched in Dumas’s oeuvre in its depictions of his most famous and beloved characters, and an unforgettable saga of swordplay, suspense, revenge, and ultimate triumph.

See all our recent coverage of the best new releases here.