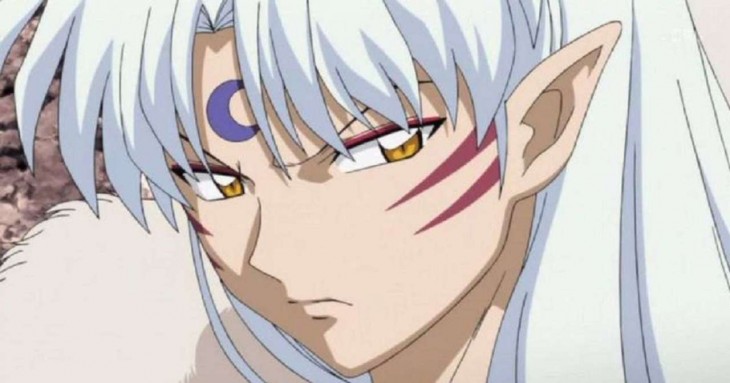 I would happily watch a couple of seasons of this man and his odd companions.

It’s no good. I’m still obsessing about the anime adaptation of Inuysasha. Specifically, about Sesshomaru as a character. He’s just so interesting. I’ve had some time to think about why I find Lord Shesshomaru such an interesting character to me, and I think it comes down to one thing.

Lord Sesshomaru is full of contradictions.

The elder to two brothers, and the only full-blooded demon of the pair, Sesshomaru appears to despise his younger half-brother, Inuyasha. Throughout the show, he stands opposed to Inuyasha, competing against him to acquire his father’s heirloom sword; Tessaiga. In their first battle over the sword, they exchange serious blows. Sesshomaru doesn’t hold back. The fight ends when Inuyasha cleaves his left arm off. He is, strangely, not particularly peeved about that, and seems to accept the outcome of that fight (even going so far as to reject his arm when it’s offered to him to reattach). The brothers clash frequently throughout the series, mostly over the sword. Several times, he mentions he does not consider Inuyasha his brother. Yet, he will go on to save Inuyasha from harm more than once, as big brothers sometimes do. He even seems to be quietly rooting for Inuysasha to prove himself worthy, while simultaneously trying to stop his little brother from advancing. This is never quite so apparent than when Inuyasha’s sword absorbs the power Sesshomaru himself had spent considerable time honing. Sesshomaru’s internal desire seems to be a powerful will to see Inuyasha prove himself as the rightful master of their father’s sword, while his external actions are by all accounts, designed to stop him from doing so. This contradiction – the brother who both disdains but loves his young brother — makes him fascinating. 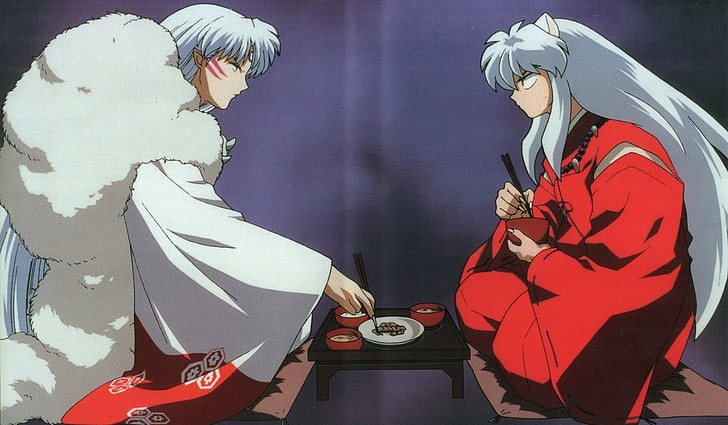 Awkward family dinner. Serious characters make for some of the best levity.

It is also true that Lord Sesshomaru despises humans. At the very least, he considers them the way humans might consider a flea; an irritation. Yet, on one of the occasions in which a young girl tries to care for him as he’s recovering from the loss of his arm, he shows some concern over her bruised face. When he encounters the girl again, she is dead. Answering his sword, he revives her. That little human girl, Rin, becomes one of his companions, and he is quite attached to her as her guardian. He will abandon fights – victory in battle seems to be the one thing he cares about – in order to save her, and even mourns for her when she dies (don’t worry, she doesn’t die for long). Warning, spoilers ahead: At the end of the series, he leaves Rin in the care of the priestess Kaeda, but visits from time to time, bringing gifts for her.

The fact that I’m a complete sucker for child-guardian bonding stories is probably why this is my favourite contradiction in Sesshomaru. He is indifferent to humans and human suffering. He will lay waste to entire armies because they would not stand aside and let him pass. He couldn’t be bothered to go around them. They are utterly inconsequential. Not Rin, though. Most of his rare displays of emotion are related to Rin and her safety. His attachment to her is observed by his demon mother, who notes that he had inherited one of his father’s stranger quirks – caring for humans.

Jakken, a frog demon that is the other of Lord Shesshomaru’s companions, is tolerated by Lord Sesshomaru; probably the odd moments where he is useful or vaguely amusing makes up for how annoying he is. I go the impression that Sesshomaru regards Rin differently. She isn’t useful at all, even being a hinderance sometimes, what with being kidnapped or in harm’s way. Still, he keeps her and cares for her all the same. 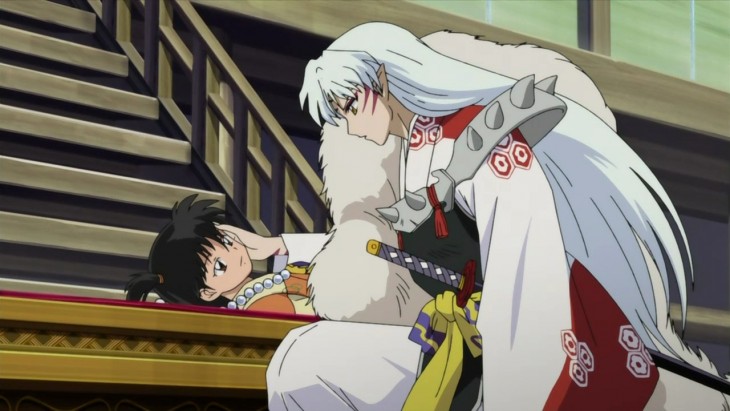 Related to Sesshomaru’s obvious affection for Rin, are the small moments when he proves he is capable of something other than disdain for the fates of those he supposedly considers lesser. There are two major instances that stand out in my memory, and I mentioned both in my last post about Inuyasha. The first is when a princess who fell in love with Lord Sesshomaru let herself be possessed so that she might acquire his greatest desire (Inuyasha’s sword) for him and prove her love. When she is at last released from the demons by Sesshomaru himself, she dies happily, knowing she was able to express her love. There was a tenderness in Sesshomaru’s farewell to her.

The same is even more true following the death of Kagura. Kudos to the voice actor, who so very skillfully expressed Sesshomaru’s softer side during that scene. Certainly, he remained fundamentally Sesshomaru – vaguely distant and aloof, not betraying his inner life as he watched Kagura die, but the gentleness in him in that moment was striking enough for me to take note. So too was his outrage at her death.

Using this .gif again, because it’s one of my favourite scenes.

Which leads to another contradiction that is also a well-worn trope. Sesshomaru takes great pains to appear aloof and distant from everything around him, but despite his stoney facade, it’s clear he is not above emotion. Though he rarely shows it – stoicism, thy name is Sesshomaru – he very clearly has a rich inner world. He feels grief and outrage, anger and uncertainty. What makes him so interesting is how rarely he shows these emotions, and yet you can still tell they’re there. While his brother wears his heart on his large red sleeve, bless him, Sesshomaru plays his much closer to his chest. His rare displays of emotion, tied so closely to his contradictions, makes him a fascinating character to observe.

Like much of the writing in Inuyasha, they’ve managed to nail this character. He could easily have become dull and predictable, as so many tropes are. But they handled him beautifully. He is my favourite character in the series. A quick look at fan sites reveals that I’m not alone in this regard. He’s certainly fun to analyze.

While tempted to choose Lord Sesshomaru as my favorite Inuyasha character, I would likely go with Kikyo, for similar reasons, as I enjoy that sense of the character facing her/his destiny with a stoic (not to say fatalistic) outlook, but letting us catch quick peeks at plenty of emotional turmoil boiling away underneath!

Oooh… good choice! I agree. While she wasn’t so full of contradictions in the manner of Sesshomaru, she was full of conflict, and was a fascinating character.