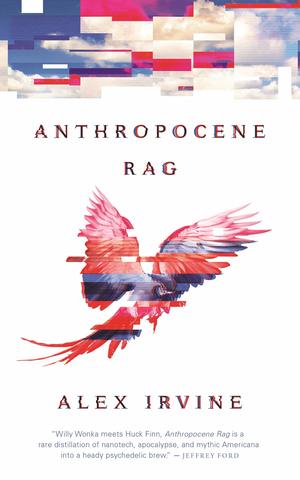 I first met Alex Irvine at a reading at the World Fantasy Convention around 14 years ago, where he read the short story “Wizard’s Six,” which was eventually collected in Jonathan Strahan’s Best Science Fiction and Fantasy of the Year Volume Two (2008). It was memorable and strange, and I think that applies to most of Alex’s fiction I’ve encountered.

It seems like an apt description for his new shot novel Anthropocene Rag, anyway. Described as a “nanotech Western,” it’s the tale of Prospector Ed, an emergent AI who seeks to understand the people who made him, and who gathers a ragtag team to journey to the mythical Monument City. Jeffrey Ford calls it “a rare distillation of nanotech, apocalypse, and mythic Americana into a heady psychedelic brew.” And in a feature review and interview at The Chicago Review of Books, Amy Brady describes it this way:

Set in a future United States, Anthropocene Rag is told from a variety of perspectives, including adventurous, meaning-seeking humans and “nanoconstructs” designed by all-powerful AI — called the Boom — to look like archetypes plucked from a classic American Western.

Two such characters are Henry Dale, a God-worshiping human, and Prospector Ed, an AI-construct that wants to better under the intelligence that created him. They’re joined by a motley crew of other humans and constructs, and together, they set out to find Monument City, a mythical place where humans and AI have learned to live in harmony.

To get there, they traverse a planet that looks quite different than our own. Climate change has ravaged the land, and the Boom have developed capabilities to transform landscapes instantaneously and with a grand sense of absurdity. Early on we witness a children’s playground come to life; the animal-shaped rides and swing sets having been granted the ability to speak. The novel is awash in the tropes of westerns and science-fiction, while playing with the familiar arcs of American myth. And yet, very little is familiar in this stunningly innovative book.

Anthropocene Rag was published by Tor.com on March 31, 2020. It is 256 pages, priced at $14.99 in trade paperback and $4.99 in digital formats. The cover is by Drive Communications. Get all the details at the Tor.com website.

See all our recent coverage of the best new SF and Fantasy here.