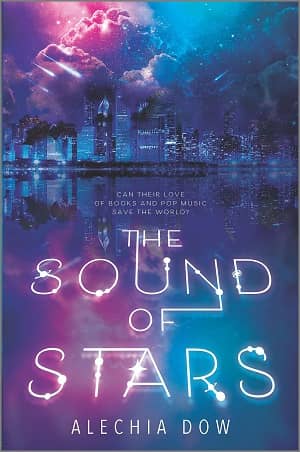 The cover blurb on Alechia Dow’s debut novel The Sound of Stars is “Can Their Love of Books and Pop Music Save the World?”, and I’ve never seen a more obvious question in my life. Every science fiction fan knows books and pop music are the only damn things keeping the world together. Duh.

Still, The Sound of Stars has a few surprises. It’s the story of a human teenager and a lab-created alien invader who team up for an epic journey with a bag of books and their favorite albums, while the fate of humanity hangs in the balance, and that’s not exactly the kind of plot summary I write every day.

It was released in hardcover last month, and Zoraida Córdova at Tor.com called it “a charming sci-fi novel… [set in] a delightful futuristic New York full of pop culture and impossible moral dilemmas,” and Kirkus Reviews says it’s “A promising debut that begs for a sequel.” Here’s a slice of the feature review from Kirkus.

When the spaceships came to Earth, there was confusion and then conflict — large numbers of humans died and the Ilori took over. Seventeen-year-old Ellie Baker managed to hold onto a trove of forbidden books, but her mother is falling into alcoholism and her father receives injections that make him an obedient Ilori servant. Lending books from her secret library makes Ellie feel less helpless even though she risks death for her transgression. Morris (or M0Rr1S) is a labmade, created to appear human and part of a unit sent to Earth to prepare for the true Ilori, who are susceptible to the Earth’s pollution. Although his father is a high-ranking true Ilori, disdainful of feelings, Morris harbors a secret love of human music. He uses his knowledge of Ellie’s secret library to convince her to collect music for him, and their bond deepens when he saves Ellie from execution… A promising debut that begs for a sequel.

The Sound of Stars was published by Inkyard Press on February 25, 2020. It is 432 pages, priced at $18.99 in hardcover and $9.99 in digital formats. The cover was designed by Mary Luna. Read the complete Prologue and first chapter at VickyWhoReads.