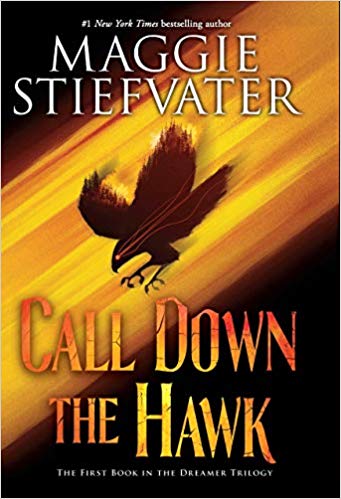 Meet the brothers Lynch. While all three of them became orphans when their father died, not all of them are human. Arguably none of them are, since their father was a dreamer, someone who can dream things (and people) and bring them back into reality upon waking.

Declan, the eldest, seems the most humanish, since his mother appears to have been a real woman.

Ronan, the middle brother, seems less so, since his mother was a dream. Quite literally. One of the things Ronan’s father brought back from his slumber was an imaginary version of Declan’s mother. This dream woman gave birth to Ronan, who, like his father, is a dreamer.

The youngest brother, Matthew, is most certainly not human. As a child, Ronan dreamed him into existence.

Being not-quite-human is a problem for the Lynch brothers. According to the prophets, a dreamer will someday conjure up the apocalypse, and fire will consume the world. Governments worldwide have created teams of Moderators to stamp out this menace.

Carmen Farooq-Lane, a young woman of extraordinary elegance and poise, is one of these foot soldiers. But no matter how many dreamers she tracks down and kills – including her own brother – the oracles’ visions stay the same. Still, the world is going to burn.

If she finds Ronan, he’s toast.

Meet Hennessy. She’s also a dreamer, but she doesn’t dare dream. She sets a timer every twenty minutes, day and night. Whenever it goes off, she jolts awake and sets it again. She can’t afford to sleep, since her dreams are killing her.

Call Down the Hawk is thrilling magical realism that will keep you up past your bedtime. A literary quality imbues Maggie Stiefvater’s innovative prose. The “good guys” act like bad guys, and the “bad guys” are just trying to survive. Both sides experience self-doubt, and there are no easy answers. But if the Lynch brothers or the Moderators don’t figure them out, the whole world will go up in flames.

Call Down the Hawk is officially marketed as Book One of a new series entitled the Dreamer Trilogy. That said, many reviewers advise readers to begin with the Raven Cycle, four previous novels that feature some of the same characters and settings. Since I didn’t want to read four hefty tomes before getting to the one that was currently trending on the New York Times bestseller list for YA Hardcover, Call Down the Hawk was the first Stiefvater book I read. At the time, I thought it worked fine as an entry point. Here’s what I wrote in my first notes toward a review:

It is a compelling, utterly unpredictable, eye-popping read. While I got the sense that I was being filled in on some previous highly dramatic events, this novel did not suffer for it. That said, I am now going to read The Raven Boys and the rest of the Raven Cycle without delay.

Now that I’ve read all four books of the Raven Cycle, I concur with the other reviewers. If you have the time and ability to read the Raven Cycle first, then you should. Don’t deprive yourself of these wonderful stories. Reading Call Down the Hawk really does spoil some of the previous novels’ surprises. Also, I suspect that if I were to re-read Call Down the Hawk now, I would understand whole new layers of it.

In addition to the Raven Cycle, Maggie Stiefvater is the author of the bestselling Shiver series and The Scorpio Races, a Michael L. Printz Honor Book. Scholastic Press released Call Down the Hawk on November 5, 2019. The novel was on the New York Times bestseller list for Young Adult hardcover for three weeks from November 23 until December 7, 2019. The publisher’s current prices are $14.99 for hardcover and $33.74 for audio CD. A short excerpt is available here on the author’s official blog.