When I play board games, I tend towards the big ones. I’m fond of games that take time and patience, and have a little depth to the rules. My recent favorites are Legends of Andor (yeah!) and the Pathfinder board game Rise of the Runelords, mostly because I have a fondness for titles that recreate an RPG experience.

But I don’t have time to actually play games at that scale much any more, so recently I’ve been tending towards smaller games, and especially those with an interesting storyline. Over the summer I bought Beyond Baker Street, and I’ve been rather taken with the simplicity of its rules set.

Beyond Baker Street is a cooperative mystery game for 2-4 players, which takes about 30 minutes. Players attempt to solve mysteries by gathering clues to find and eliminate suspects and uncover motives, and must work together, meaning they win or lose as a group. And it’s easy to lose — they’re in a race against time to crack the mystery before Sherlock Holmes.

The game has a fun mechanic. It’s chiefly a card game; everyone is dealt a hand, but the twist is that players hold their hands so that everyone can see their cards except them (this is apparently similar to the game Hanabi, which I’m unfamiliar with.) The game is afoot, Watson! 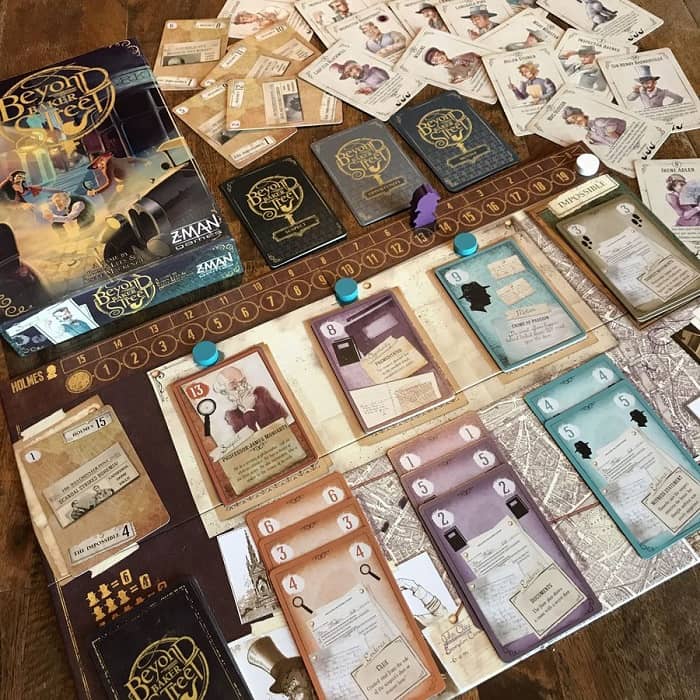 Most of the reviews that first interested me in Beyond Baker Street make ample reference to Hanabi, like this one from Chris Wray at Opinionated Gamers:

I was drawn to Beyond Baker Street when I heard it compared favorably to Hanabi — which is one of my all-time favorite games — and I ended up playing this new Z-Man title a few times during Gen Con. The rumors were true: the game is quite similar to Hanabi. But in the end, Beyond Baker Street is a different game, one that is more forgiving and more variable. If you like cooperative deduction games, this is worth checking out…

Beyond Baker Street is a tense experience, and I’ve enjoyed the brain-burny challenges it presents. The gameplay is clever, the artwork is beautiful, and because of the different cases and characters, this game features considerable replayability.

As with Hanabi, Beyond Baker Street forces you to see the game state from the perspective of other players. Also like Hanabi, this rewards repeated play with the same persons, since you can develop intuitions about — and conventions with — the other players.

But unlike Hanabi, there’s variability (and thus more replayability) built into this system. The different cases keep gameplay fresh, and the characters add a fascinating twist. No two games I’ve played have felt similar to each other.

As a result of this and some other factors — most notably having to focus on building three stacks instead of five — Beyond Baker Street feels more forgiving than Hanabi. This isn’t a simpler game — in fact, it is considerably more complex from a rules perspective — but the system allows for more flexibility, at least on the easier cases. 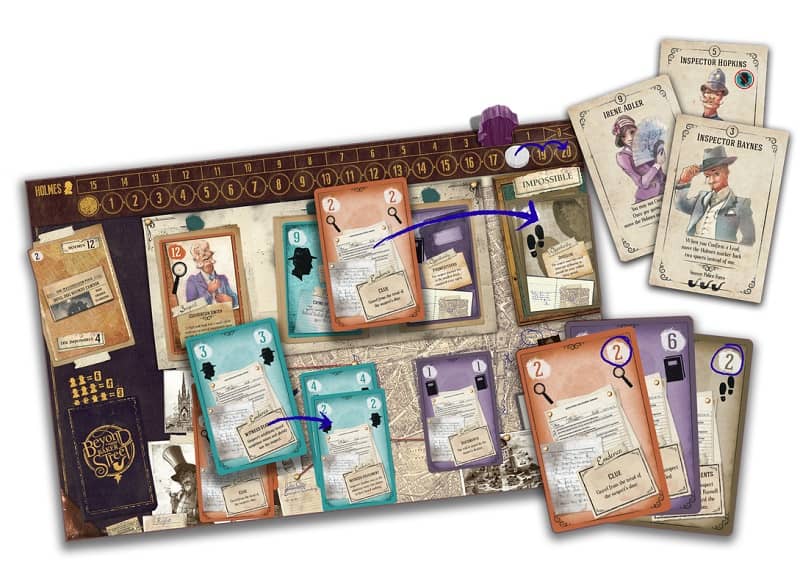 Beyond Baker Street is an attractive game with top-notch art. Here’s what inside the box:

Beyond Baker Street was designed by Robin Lees and Steve Mackenzie, and published by Z-Man Games in 2016. It retails for $29.99. Read the rulebook online or order directly from Z-Man Games here.

I love the look of Andor. But because fighting moves the timer track forward, I’m finding it to be pretty tough.

Pretty tough, as in hard to win? Yeah, the very first scenario was CRAZY tough. Every combat essentially costs a turn. We won it on the first run-through, but I think that was 80% luck.