Author Carol Emshwiller, who died in February of this year at the age of 97, has won the Cordwainer Smith Rediscovery Award, which honors overlooked and neglected science fiction and fantasy writers who deserve to be discovered by modern readers.

I met Carol only a couple of times, always at the World Fantasy Convention. I’m pretty sure she was in her 90s both times we met. She was friendly, approachable, and absolutely charming. Many writers have a late flowering in their career; Carol, who was the wife of Ed Emshwiller, one of the most popular and prolific SF cover artists of the 50s and 60s, and who famously was the model for most of the beautiful women in his paintings, published her first stories in 1955, but wrote the majority of her substantial body of short fiction from 1985 – 2011, after she turned 60. She published the first of her four SF novels, Carmen Dog, in 1988, when she was 67.

It took far too long for Carol to be acknowledged as a serious writer, but it eventually happened. Her short story “Creature” won a Nebula Award in 2002; she won again for “I Live With You” in 2005. Her 2002 novel The Mount was nominated for a Nebula and won the Philip K. Dick Award. Her 1990 collection The Start of the End of It All won the World Fantasy Award, and she received the World Fantasy Award for Life Achievement in 2005.

See a gorgeous gallery of Ed Emshwiller’s science fiction artwork, much of it featuring Carol, here.

Carol Emshwiller’s SF & fantasy novels are Carmen Dog (1988), The Mount (2002), Mister Boots (2005), and The Secret City (2007). Her novels were well received — including a Tiptree nomination for Carmen Dog, and she placed second on the ballot for the Locus Award for Best Young Adult Book for Mister Boots — but she was known chiefly for her short fiction, which was collected in Joy in Our Cause (1974), Report to the Men’s Club (2002), I Live with You (2005), In the Time of War and Other Stories of Conflict/Master of the Road to Nowhere and Other Tales of the Fantastic (2011), and two volumes of The Collected Stories of Carol Emshwiller (2011 and 2016), from Nonstop Press. 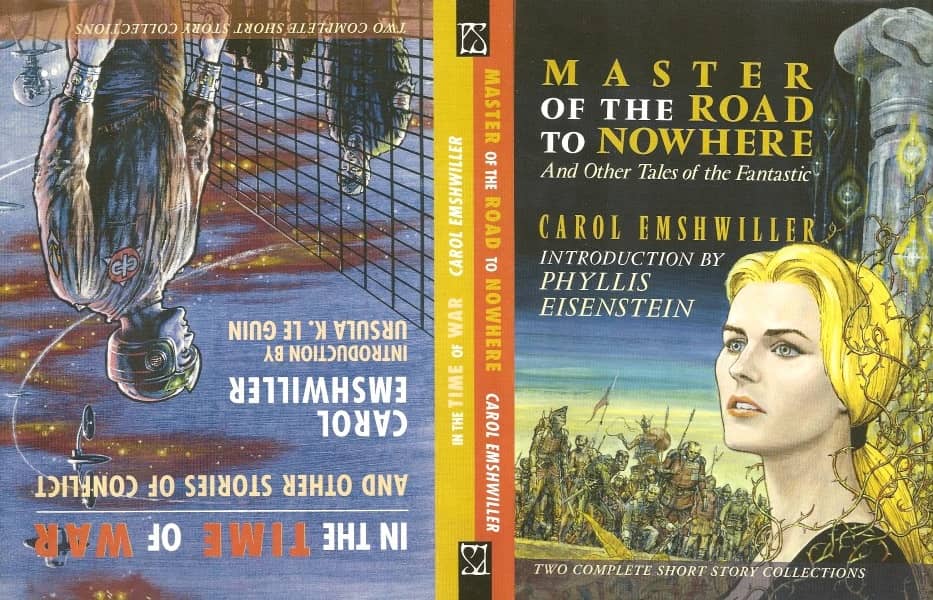 The 2-sided collection In the Time of War and Other Stories of Conflict/Master of the Road to Nowhere and Other Tales of the Fantastic
(PS Publishing, 2011). Covers by Ed Emshwiller. Yes, that’s probably Carol in the painting.

Carol’s fame has only grown over the last few years, as more and more critics have come to recognize her as a major contributor to the genre. Ursula K. Le Guin called her “a major fabulist, a marvelous magical realist, one of the strongest, most complex, most consistently feminist voices in fiction.”

The judges for the Cordwainer Smith Rediscovery Award this year were Barry Malzberg, Mike Resnick, and Robert J. Sawyer. The award was announced July 12, 2019 during Readercon 30 in Quincy, MA.

The Cordwainer Smith Rediscovery Award was named after Paul Linebarger, who used the pen name “Cordwainer Smith” to write science fiction from 1950 – 1966. The Award was inaugurated in 2001 and has been given to such luminaries as R.A. Lafferty, Leigh Brackett, Stanley G. Weinbaum, Katherine MacLean, Fredric Brown, Clark Ashton Smith, and Judith Merril. Here’s the complete list of recipients.

The Award’s website is maintained by Smith’s daughter; it has not been updated since 2012, but it contains plenty of information about the winners prior to that.

It is always a bit bittersweet to find out who the Cordwainer Smith Rediscovery winner is. It is like “Comeback Player of the Year”, the award no one wants to win!

On the brighter side, it does mean a nice focus on Ms. Emshwiller at next year’s Readercon (like this year’s panels on Frank Robinson’s life and work).

> It is always a bit bittersweet to find out who the Cordwainer Smith Rediscovery winner is. It is like “Comeback Player of the Year”, the award no one wants to win!

Yeah, I know what you mean. It’s one thing to have Hodgson, Weinbaum, and Merritt win — those guys all died before 1945. But when folks who died this decade (like Emshwiller and Robinson) or who are still alive (Katherine MacLean) start making the list, then I definitely start to feel like one of the “old guard” myself. 🙂

Still, I think the Award does a real service by helping to promote deserving writers. There are some powerful forces at work, including time and apathy, that obscure and obliterate genre history. It’s good to see folks working to preserve it.

Carol Emshwiller has been taken very seriously in the various fields of fiction she’d worked in at very latest by the 1960s…not solely in fantastic fiction. Awards are not the only measure of serious attention.

As I write, a celebratory memorial service for Emswiller is in progress in New York City, hosted by her and Edmund Emshwiller’s adult children…I’m sorry to be missing it, for as it turned out unavoidable but insufficient reasons. We have the work of both of them, and in Philadelphia, closer to where I live, a retrospective of his film work is coming up at the Lightbox Film Center:
https://lightboxfilmcenter.org/series/dream-dance-the-art-of-ed-emshwiller

It is indicative of the unavoidable reasons that I manage to misspell “Emshwiller” in my first reference in the last comment!

Many thanks for letting us know about the memorial service! And the link to the Emswiller film retrospective.