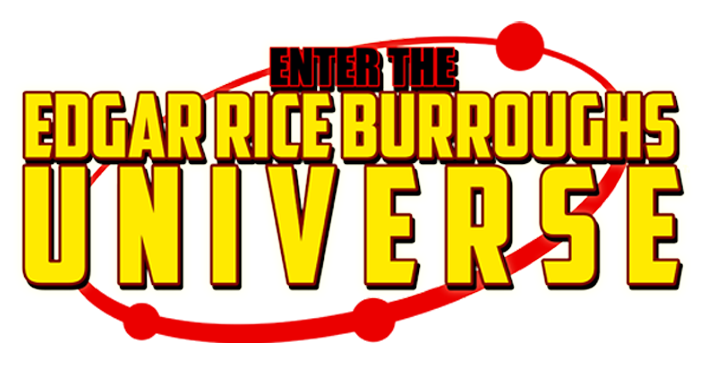 Today at Comic-Con International in San Diego, California, Edgar Rice Burroughs, Inc., announced a new series of authorized, canonical novels featuring the myriad characters and worlds from the works of Master of Adventure: the Edgar Rice Burroughs Universe. The new series, which will debut in 2020, represents a number of publishing “firsts” that, as Director of Publishing at ERB, Inc., I am particularly excited to share with Black Gate readers.

The very first first, and the most important, actually begins with an achievement of Mr. Burroughs, who created the first expansive, fully cohesive literary universe. Of course, there were other authors who crossed over their own characters between their novels and series — Jules Verne and H. Rider Haggard, for example — but no one before ERB had made such interconnections to the degree that he did. As early as the years of 1913 to 1916 — when writing novels such as The Mad King, The Eternal Lover, The Mucker, The Oakdale Affair, and, arguably, The Man-Eater, the latter featuring a brief cameo from a certain “Mrs. Clayton” at a Central African estate — Burroughs began weaving an intricate tapestry of internal references connecting seemingly disparate works. Soon thereafter came references to Barsoom and John Carter in the “alternate future” continuity of The Moon Maid (written in 1919).

Then, in 1928, while writing Tanar of Pellucidar, Burroughs introduced a character named Jason Gridley, who had invented a transmitter-receiver device that utilized the “Gridley Wave,” thus permitting communication between the Earth’s surface and the world of Pellucidar at its core. Gridley went on to appear or be mentioned in seven more novels, ultimately connecting four of Burroughs’ major series and placing them within the same continuity: the Pellucidar, Tarzan, Barsoom (Mars), and Amtor (Venus) series. These crossovers, combined with the earlier connections Burroughs had made between his novels, eventually created an interconnected universe that encompassed more than sixty books.

The forthcoming Edgar Rice Burroughs Universe series picks up where Burroughs left off, with new adventures not only set in ERB’s first-of-a-kind expansive continuity but also relating a continuing storyline that threads its way through all the novels: what the other writers of the series and I have begun calling the “super-arc.” Fittingly, this through line begins in 1950, the year of Mr. Burroughs’ passing, with Jason Gridley in Pellucidar investigating a strange disruption in the Gridley Wave.

In the super-arc, Jason Gridley will be joined by another first: a new major ERB heroine named Victory Harben. Who is Victory Harben? Well, I’d rather not give too much away at this early stage, but dedicated fans of ERB will recall the von Harben family—Karl and his son Erich (discoverer of that singular lightweight and highly durable metal known as Harbenite) and his daughter Gretchen—who appeared in Tarzan and the Lost Empire, Tarzan at the Earth’s Core, and the juvenile novel Tarzan and the Tarzan Twins with Jad-Bal-Ja the Golden Lion. Is Victory related to Karl, Erich, and Gretchen? And if so, then why isn’t she named Victory von Harben? You’ll find out in the new series.

Yet another first has to do with canon. Though a select few novels by writers other than ERB have been authorized by Edgar Rice Burroughs, Inc., in the past — such as Tarzan and the Valley of Gold by Fritz Leiber, Mahars of Pellucidar by John Eric Holmes, and Tarzan and the Dark Heart of Time by Philip José Farmer — the company has never before officially declared such works to be canon. Now that has changed. The new ERB Universe novels, expanding upon Burroughs’ original works and existing in their continuity, will be officially canon. They will be faithful to and consistent with the stories written by Edgar Rice Burroughs. Moreover, the new ERB Universe novels will be faithful to and consistent with one another. The fans have been quite vocal about what they want — adherence to existing canon and consistency between new works — and we’ve heard you loud and clear. The Edgar Rice Burroughs Universe series will give you all that and more. It will also begin to move the timeline forward, allowing the heroes and heroines to explore strange and exotic worlds only mentioned or hinted at by ERB in the original novels, giving longtime ERB fans and new readers alike something to look forward to.

In future guest posts on Black Gate, I’ll delve more deeply into how the expanding ERB Universe works and how seemingly incongruent works by Burroughs fit into the big picture, such as Beyond Thirty and the Va-nah (Moon) series. I’ll also begin introducing you to the amazing team of writers I’m working with and the methods we’re using to grow the universe together as a cohesive whole. And I’ll answer the question of exactly where these new tales are coming from, for as most readers of Edgar Rice Burroughs know, the Master of Adventure himself interacted with the immortal characters whose lives he chronicled, receiving their amazing narratives firsthand.

One thing is for sure: it’s an exciting time to be an ERB fan!

This does sound promising and I look forward to seeing the results, but I have a question – in what way will these be ERB stories, beyond simply using (or springboarding from) settings and characters established by Burroughs? There were many things about Burroughs that moderns would consider “quaint” at the very least, ranging from his attitudes towards the relations between the sexes and his sometimes problematic views of non Anglo-Saxon peoples to his highly individual (if not to say eccentric) prose style.

As a lover of Burroughs (which I am and have been since I plucked the Ballentine paperback of A Princess of Mars off the drug store spinner rack in 1972), I wonder – if you remove these now-unfashionable elements, will you have a real Burroughs story, or just a generic action tale enlivened with a few familiar names?

I am excited to hear of this project and wish it every success.

This sounds great! I hope it succeeds and makes ERB proud.

If ANYBODY can pull it off, you can, Christopher. Looking forward to this!

Outstanding! I cannot wait for the new imprint, and I am thrilled Chris is involved!

Thomas Parker, thank you for your well wishes for the series. Regarding in what way these will be ERB stories, to quote Thomas Mann, “Assist the new without sacrificing the old.” Or as I once wrote in an essay on writing within a literary tradition, “Writing is a dialogue that takes place over centuries. As the conversation turns, new topics and feelings and questions and insights arise, all of which are born out of what has gone before. Move the conversation forward, but don’t forget what’s been said.” ERB’s own writing evolved over the decades. The elegant style of his early works transformed into a more concise, less flowery style in his later tales, and yet the storytelling of his later works bears the same immortal quality as the earlier ones. He understood the thrum and beat of mythic storytelling, as do the authors I have carefully chosen to work with on the series. I think you will be pleasantly surprised at how the source material is being handled, and that it is indeed possible to bridge the past and future in a satisfying, authentic way. I know it’s a rare thing, and a healthy skepticism is only natural. I look forward to hearing your thoughts after the series sees print.

Thanks so much for the supportive comments, everyone. It’s a heck of a lot of work expanding a universe as immense and intricate as ERB’s but also a heck of a lot of fun! Fortunately, we’ve got an amazing team working on the series!