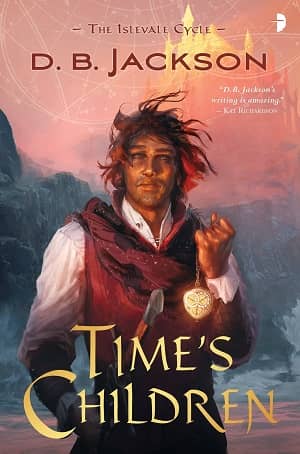 Time’s Children is the first novel in a new series called The Islevale Cycle, by D. B. Jackson, one of my favorite fantasy authors. Jackson excels at fully realized worldbuilding, including nature, culture, history, religion, politics — the grand scale and everyday life. Islevale is no exception: a large collection of islands with a great variety of culture and nature among them, as well as travel by ship on the waters between. Our young hero Tobias has been raised in Trevynisle, trained in practical and magical studies. He is quickly swept into his travel adventure on a merchant sailing ship, and then to various city and wilderness locations throughout Islevale.

The magic of Islevale centers around Travelers: Walkers, who can travel through time; Spanners, who can move instantly between great distances; and Crossers, who can move through solid objects. The magic is a combination of innate talent and the use of special tools to calibrate each destination. Tobias is a Walker, and we learn the intricacies of these magical abilities through his experiences.

Time travel is a challenge for any storyteller, and Jackson builds a solid and realistic framework for the Walkers. The amount they move forward or back in time is added to their physical body. For instance, if Tobias goes back one week in time and then returns the one week day to his original “present,” his body ages two weeks, although his mind and memory would only have aged the amount of time he experienced during the “trip.” Trevynisle’s governing rules prevent Walkers from going more than one year past or future. But Tobias accepts a mission to go fourteen years in the past — he leaves his “present” as a fifteen-year-old boy and arrives in the body of an almost-thirty-year-old man. The characters wrestle with the mechanics and morality of time travel and their actions in the past, present, and future — their choices have real consequences, anticipated or not.

I also particularly enjoyed the elements of daily life that affect the characters and the action. When Tobias is called before the Lord Chancellor of Trevynisle, he comes immediately from sword practice — hot, sweaty, and concerned about appearing in such rough condition. When he rescues infant Sofya, he suddenly has to deal with feeding, changing and caring for a baby — in addition to evading assassins still intent on completing their mission!

Tobias is not our only point of view character — in fact, we see the story from many different perspectives, including the antagonists. I enjoy this kind of storytelling, and Jackson does an amazing job building the richness of the world and presenting each point-of-view character with their own voice. In addition to the broad cast of human characters, there are other intriguing species in Islevale — mostly dangerous to humans. On Trevynisle, Tobias has befriended Droë a mysterious Tirribin who becomes an integral part of the story. Through Droë, we learn of other magical creatures whom the humans only know as “demons,” such as the predatory Belvora, all bound by the oaths and laws of the Distraint. I was pleasantly surprised to see Droë become a more central character, and I hope to see more of her and the other “demons” in the rest of the series.

There were some things I didn’t enjoy about the book. The large cast of characters and different names made it challenging to keep everyone straight. As much as I appreciated the map and glossary, I would’ve liked a list of characters.

Although I particularly appreciate Jackson’s beautiful language and description, sometimes it does slow down the action. This, combined with the time travel and large cast of characters, made it a challenge to keep everything straight. As a simple example, each chapter begins with a date in the Islevale time-keeping, which helps to keep track of the time travel and relative passage of time. I often flipped back to a previous section to see the timelines match up. Overall, I think it was worth the effort, because there are so many elements that weave together, returning a delayed “payload” for the reader.

The sequel, Time’s Demon, is scheduled to arrive in May. I knew this is the first of a planned trilogy from the beginning, and I am fully invested in continuing the story with the next book. For readers who are not, they may be disappointed with the ending, which is a clear bridge to the next volume.

This is an epic fantasy with magic, sword fighting, political intrigue, demons, assassins, and budding romance. Plus time travel! And well done time travel at that. I’m a sucker for time travel stories, but I’m often disappointed by their simplistic delivery or avoidance of temporal paradox — that’s not the case here at all. Jackson created an entirely believable world of Travelers and other magical beings.

I was fascinated by the way the Travelers work, and I enjoyed the different characters’ POV as they carried me through the story. I look forward to Time’s Demon — where I hope we will learn more about Droë, as well as the continued adventures of Tobias, Mara, and Sofya.

Margaret S. McGraw is an author and editor in speculative fiction. She is co-editor of the forthcoming Predators in Petticoats, Lawless Lands: Tales from the Weird Frontier, and Weird Wild West. Her stories appear in Lawless Lands and Chasing the Light. Margaret blogs on WritersSpark.com and TheMillionWords.net, and spends too much time on Facebook.