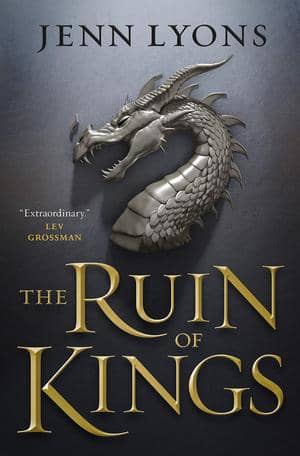 It’s tough being a debut fantasy writer. There are so many books being released every month, it’s very, very challenging for new voices to be heard. The thing that can really help is a starred review from one of the big four review sites — Publishers Weekly, Kirkus Reviews, Library Journal, or Booklist. Even a single starred review can mean the difference between a successful launch and vanishing without a trace.

Getting a pair of starred reviews is a very good omen, and three is extremely rare. I can only think of a handful of titles that pulled off the nearly-impossible trick of a clean sweep of all four — but that’s exactly what happened with Jenn Lyons’s new novel The Ruin of Kings. Library Journal called it “Stunning,” Booklist labeled it “Dazzling,” and Publishers Weekly called it ” intricate epic fantasy.” But my favorite review was from Kirkus, who said:

The story begins in a jail cell with a young man named Kihrin being guarded by Talon, a beautiful and monstrous shape-shifting assassin. Kihrin, awaiting what will surely be his death, begins telling her his life story. Talon complements Kihrin’s tale with her own memories of the past few years, and, together, they weave a jaw-dropping, action-packed story of betrayal, greed, and grand-scale conspiracy. It all begins when Kihrin — a thief who has been raised in the slums by a compassionate blind musician—witnesses a horrific murder while robbing a house…. While the comparisons to Patrick Rothfuss’ The Kingkiller Chronicle will be unavoidable — in terms of story structure and general narrative content — the potential of this projected five-book saga may be even greater. Although a cast of well-developed characters and an impressively intricate storyline power this novel, it’s Lyons’ audacious worldbuilding that makes for such an unforgettable read. In a sprawling, magic-filled world populated by gods, dragons, krakens, witches, demons, ghosts, shape-shifters, zombies, and so much more, Lyons ties it all together seamlessly to create literary magic.

Epic fantasy fans looking for a virtually un-put-down-able read should look no further.

It all sounded wonderful until I read “projected five-book saga”. Oh no, not again! Do I buy it, and put it on a shelf, wait for the next four (at at least a year each, perhaps more, perhaps much more, or wait until they are all published and hope (I’m in my 70s, will I even be alive?) when No. 5 is available the rest are still in print, or buy it and read it and then reread each time a new one comes out because I’ve forgotten half of it…or skip it and save the $25?

I don’t start many new fantasy series until they’re complete these days. There are enough out there that ARE complete that I’m rarely tempted.