Twenty-five years ago oversized trade paperbacks fantasy anthologies were few and far between. Today they’re the default, but in the early 90s, when original anthologies routinely appeared as mass markets paperbacks, you had to be something special to warrant the deluxe trade paper format. (Nowadays, of course, the mass market anthology is long dead, but that’s a subject for a different post.)

Strange Dreams was something special. In the early 90s Stephen Donaldson was one of top-selling fantasy writers on the planet, with the bestelling Mordant’s Need and Chronicles of Thomas Covenant to his credit. In his introduction he relates how the book came about as a result of a conversation with master anthologist Martin H. Greenberg.

We were discussing the basis on which I might be willing — or indeed able — to pull together a collection, and I quickly dismissed the traditional anthological fundaments: Historical Development (where fantasy came from and how it grew); Defense of Genre (why fantasy is written); Technical Display (how fantasy can be written); and Thematic Modulation (what fantasy has to say about X and Y)… once all these bases have been diminished, why bother to do a collection at all?

Because, I told Martin, I love these stories. Some of them made my viscera twang; some impressed themselves on my memory or on my heart. In fact, there are certain stories included here that I’ve been quite unable to forget. They aren’t just memorable, they’re indelible. What’s wrong, I asked Martin, with an anthology built on the simple principle that the stories in it are ones I haven’t been able to shake from my mind? … what’s wrong with an anthology founded purely and plainy on my own taste? It may be egocentric, but at least it’s sincere.

Martin, bless him, was kind enough to say that there’s nothing wrong with an anthology like that. And so here we are. 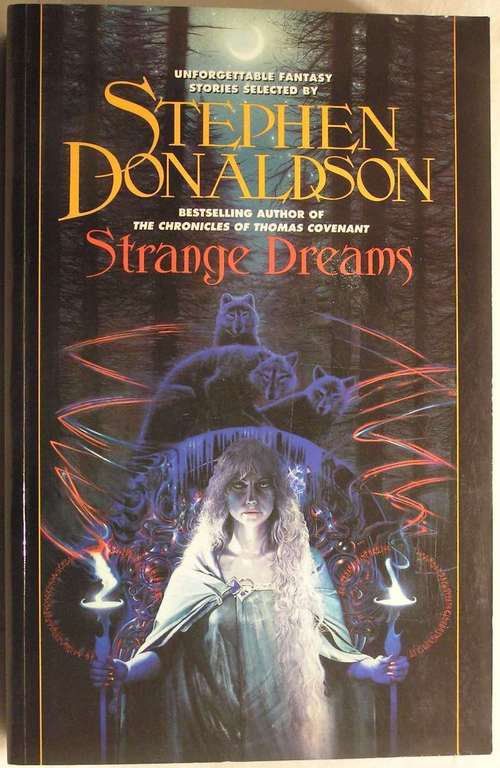 Strange Dreams was published in trade paperback in 1993 with a cover by Gervase Gallardo, and reprinted a month later in the UK with a new cover by Geoff Taylor. It had a hardcover edition from the Science Fiction Book Club in 1994, but that was the last time it was reprinted. It never appeared in mass market paperback, and there is no digital edition. It has been out of print for 24 years.

Strange Dreams was published by Bantam Spectra in July 1993. It is 531 pages, priced at $14.95. There is no digital edition. The cover is by Gervase Gallardo. I bought an unread copy on eBay for $7 earlier this year.

Yeah, that is a pretty great TOC. And I didn’t realize Gallardo was still active then! (And, as far as I can tell, is still alive today?)

I wish I could tell you! There just isn’t much information out there about him. In fact, there’s so little info that if you do a Google search, three of the Top Five results point back to this article:

One issue is that his name is actually Gervasio; he was just credited as Gervase. Under his own name, he does have a vanishingly small Wikipedia article:

Also, look what I just ordered!

Wow! That book looks fantastic. How did you find it??