Ausma Zehanat Khan is the author of the contemporary thriller The Unquiet Dead and its four sequels, including The Language of Secrets and A Deadly Divide. The Khorasan Archives is a considerable departure for her: an ambitious four-volume secondary world fantasy. It opened last year with The Bloodprint, which S.A. Chakraborty (The City of Brass) called “wonderfully written… reminiscent of a post-apocalyptic Odyssey… this time with a pair of women warriors at the helm.”

The second volume, The Black Khan, arrived last month from Harper Voyager. I’m quite intrigued by this series, and may not be able to wait until it’s complete to dip into it. Here’s the back cover text for The Bloodprint.

The author of the acclaimed mystery The Unquiet Dead delivers her first fantasy novel — the opening installment in a thrilling quartet — a tale of religion, oppression, and political intrigue that radiates with heroism, wonder, and hope.

A dark power called the Talisman, born of ignorance and persecution, has risen in the land. Led by a man known only as the One-Eyed Preacher, it is a cruel and terrifying movement bent on world domination — a superstitious patriarchy that suppresses knowledge and subjugates women. And it is growing.

But there are those who fight the Talisman’s spread, including the Companions of Hira, a diverse group of influential women whose power derives from the Claim—the magic inherent in the words of a sacred scripture. Foremost among them is Arian and her fellow warrior, Sinnia, skilled fighters who are knowledgeable in the Claim. This daring pair have long stalked Talisman slave-chains, searching for clues and weapons to help them battle their enemy’s oppressive ways. Now they may have discovered a miraculous symbol of hope that can destroy the One-Eyed Preacher and his fervid followers: the Bloodprint, a dangerous text the Talisman has tried to erase from the world.

Finding the Bloodprint promises to be their most perilous undertaking yet, an arduous journey that will lead them deep into Talisman territory. Though they will be helped by allies — a loyal boy they freed from slavery and a man that used to be both Arian’s confidant and sword master — Arian and Sinnia know that this mission may well be their last.

The back cover text for The Black Khan contains spoilers for the first volume, so read at your own risk! Here it is. 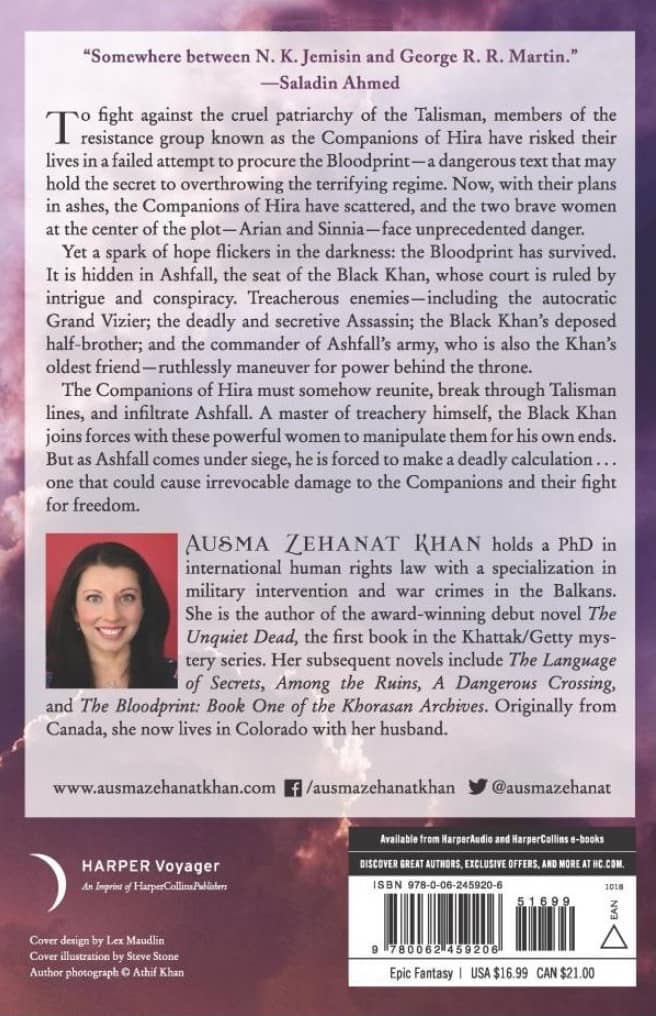 Both volumes were released in trade paperback by Harper Voyager, and are still in print. Feliza Casano reviewed the second book at Tor.com, saying:

The plot begins to pick up as the Talisman threat to Ashfall begins to gain traction, taking the cast across the lands of Khorasan. Ausma Zehanat Khan’s worldbuilding in The Bloodprint was gorgeous, and she continues to flesh out Khorasan in The Black Khan: the novel’s setting ranges from North Khorasan, the walled-off land the Authoritan rules, to the Black Khan’s holding of Ashfall far to the southwest…

Power is a major theme of the series and focused on with more intensity in The Black Khan. The machinations of power, both magical and political, are a focus of both the Authoritan arc in the first act of the novel and the Ashfall assault arc in the third act… The Khorasan Archives series is an excellent one for readers fascinated with preservation of artifacts and the power of language,

See all of our recent coverage of Series Fantasy here.