The April, 1954 issue is one of the more remarkable issues of Galaxy Science Fiction, in my opinion. I’m amazed at the quality of the stories. There have been many good issues, of course, but this is one of those rare issues that jumps out at me. It’s like watching a beloved TV series where a few episodes really stand out. It’s the nature of art, I suppose. Every piece is its own and affects people differently; some may enjoy it, some may reject it, some may be confused, some may be enlightened. And the same artist might create multiple pieces that evoke different reactions from the same person. Rather than ramble on about my thoughts on art, I’ll return to the topic of this article and review the fiction.

“The Midas Plague” by Frederik Pohl — In Morey’s world, consuming is mandatory. Houses, clothes, and food must be purchased and used to meet quota. There must not be waste. Those at the high-end of society have low quotas and can live the high-life of one-room houses, perhaps without any cars. But those at the low-end of society struggle in consuming enormous mansions, luxury cars, and so much of material products and food that there aren’t enough hours to consume it all. Morey only works one day per week because the demands of consuming take the rest of his time. Robots have helped to create a world where there is an abundance of everything, forcing the quotas in order to avoid waste and support the massive production.

Morey’s wife Cherry comes from a well-off family who has very little to consume. She loves Morey, but it’s a difficult adjustment to his lower-class life of consuming so much. Morey tries to help her by consuming more, but they’re not making their quotas. 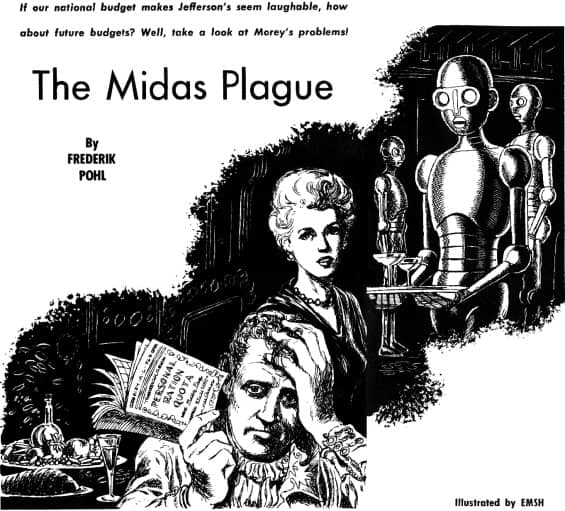 The grueling pace of consuming is too much for Morey, and he’s uncertain what to do. Soon, he’s spending time in a dive, commiserating with others in similar situations. Through all of the drunken advice, an idea comes to mind that Morey sets in motion before passing out — one that could change society as a whole.

Pohl’s story is interesting. It doesn’t seem completely logical to me, but he makes it work, playing out his idea as far as he wants to take it. I think this is a good commentary on consumerism without becoming too political. 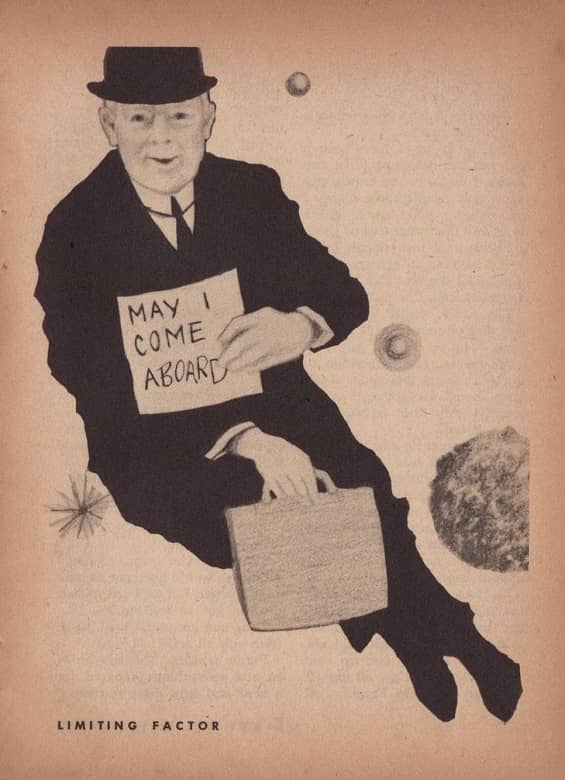 “Limiting Factor” by Theodore R. Cogswell — The super-humans of society have identified themselves, numbering about 40. It’s likely only a matter of time before normal people realize what they can do — from telepathy to telekinesis and more. So they decide to abandon Earth in a spaceship they built, using the power from their own minds to move rapidly through space. When they reach Alpha Centauri, they encounter another being who asks to come aboard, and he gives them some advice they quickly appreciate.

I liked that it wasn’t an easy choice for all of the super-humans to leave Earth, and I really enjoyed where Cogswell went with the plot. Cogswell wrote multiple short stories as well as a Star Trek novel (Spock, Messiah! was published in 1976 and co-written with Charles A. Spano, Jr.).

“Hands Off” by Robert Sheckley — Three scoundrels are flying their spaceship toward an unknown planet, searching for anything to claim for themselves. They find an alien ship on the surface and decide to swap it with their own. Kalen returns to his ship and is attacked by the humans. Without sufficient weaponry to fight back, he bides his time, hoping he can return to his ship before he runs out of air or his external skin hardens to the point that he’s unable to move. 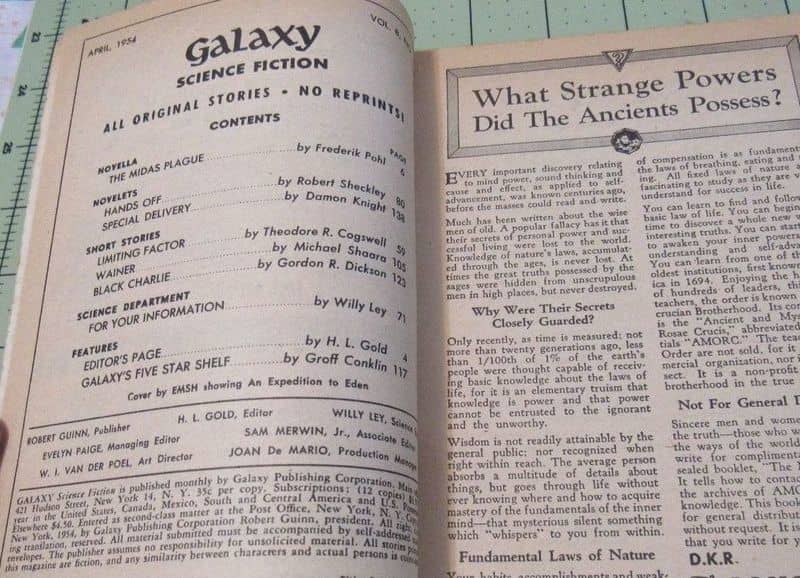 “Wainer” by Michael Shaara — Wainer is unable to have an electronic brain implanted after birth and finds his own way in life as a reject. He’s talented in music and writes numerous symphonies. But his greatest contribution to humanity comes in discovering who — or rather what — he really is.

I loved this story — how it moved through the Wainer’s life, told from another character’s perspective. Shaara somehow managed to write a short story that carries a lot of depth.

“Black Charlie” by Gordon R. Dickson — Mr. Jones is an art dealer who travels to Elman’s World to meet with a man who has some statuary for sale. Jones looks at the sandstone figurines and is unimpressed. The seller asks Jones to meet with the alien artist, Black Charlie, to deliver the news that he won’t be purchasing anything. Black Charlie somewhat resembles a large otter and communicates through gestures and whistling, and though it’s clear he has intelligence, Jones isn’t certain he conveys the message correctly. It’s a simple meeting that he thinks little about until years later when he’s invited to return to the distant world and interacts with Black Charlie one final time.

Jones is a full character with a clear, distinct voice, and I don’t always see that in older science fiction. It felt like reading an actual account from someone; no bells and whistles — just a straight-up tale that connects. It has been been reprinted more than half a dozen times, including in Love Not Human (Ace, 1981).

“Special Delivery” by Damon Knight — Moira is pregnant and begins acting strangely — laughing and denying that she laughed or suddenly changing her preference in drinks. At first, Len thinks his wife is simply going through normal pregnancy changes. Later, Moira informs him that their child is influencing her and has advanced plans, even while in utero. Over time, it becomes clear that their unborn son intends to be in charge of both of their lives, whether they wish it or not.

I didn’t enjoy much of this story. Beyond the implausibility, it just didn’t resonate with me. But an issue of Galaxy in which a Damon Knight story seems like the weakest one illustrates why this is such a great issue, overall. Also, I may in the minority in disliking the story; it’s been reprinted multiple times.

I can’t pick a favorite story this month. It’s either “Wainer” or “Black Charlie” with “Hands Off” close behind. All three are great stories.