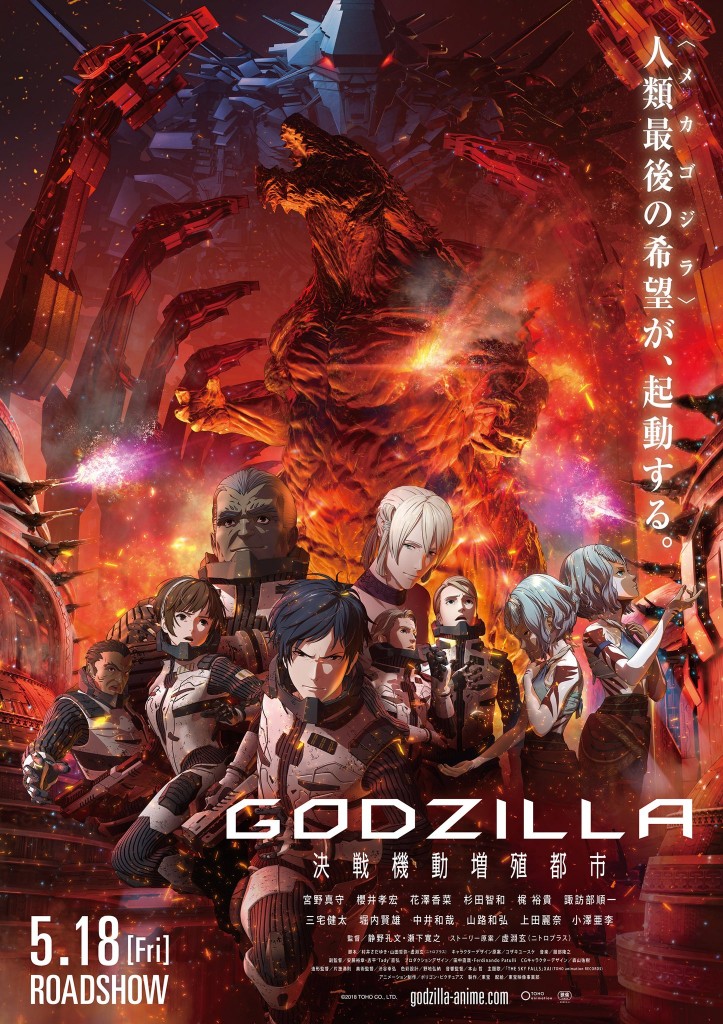 Of course not, because here we are with the sequel. City on the Edge of Battle starts moments after the Planet of the Monster’s end-credits teaser, when Haruo wakes up in the care of a girl belonging to the descendants of the humans who have survived on the planet over the millennia.

The landing party on Earth, against objections of those still on the Aratrum, renew the fight against Godzilla, now with different weaponry and facing new challenges. Most of the story hinges on two new ideas: the Houtua, the native human-like race who have developed insectoid evolution into their genetics, and the existence of “Mechagodzilla City,” a technological installation that evolved from the nanometal of the Mechagodzilla robot the Bilusaludo left on the planet thousands of years ago.

Carrying over from the first movie, although more subdued, is the theme of Godzilla’s evolutionary dominance and god-like stature. “Gradually, this ecosystem has been made to serve one individual,” the Aratrum’s biologist explains to Haruo. “Earth’s current ecosystem is structured to serve under Godzilla. As the lord of creation, I can surmise that Earth chose not humans, but it.” 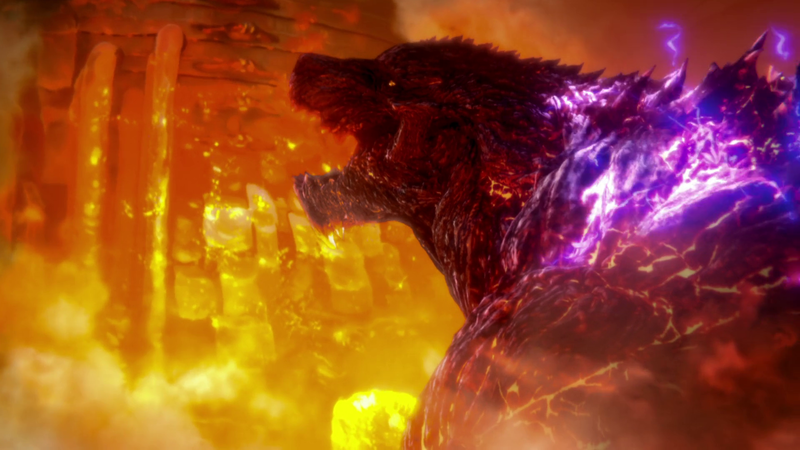 The discovery that the nanometal left behind with the unused Mechagodzilla has grown its own technologically advanced city is an outlandish but fascinating concept. Mechagodzilla City becomes the centerpiece of the movie and the main tool in the campaign against Super Godzilla.

The Bilusaludo were poorly developed in Planet of the Monsters; the screenplay focused more on the mystical, spiritual race the Exif and their belief in Godzilla as punishment for hubris. City of the Edge of Battle sidelines the Exif and takes an aggressive approach to the Bilusaludo, who move into near-villain territory as the story approaches its climax. The Bilusaludo are no longer shown to be just “the good at technology guys,” but believers in technology merging with evolution — with a dash of Vulcan logic. Finding the nanometal and Mechagodzilla City on Earth changes the Bilusaludo’s plans, or else reveals what they always were. According to Metphies, the Exif priest who confides in Haruo, the Bilusaludo aren’t seeking to “unify the galaxy’s intelligence” the way the Exif are, but to “become one with monsters.”

The movie makes the “becoming one with monsters” theme a touch opaque. It appears to mean the same thing as merging with technology, but the dialogue of one of the Bilusaludo leaders, Galu-gu, muddies this: “Godzilla is a product of Earth’s civilization. You seem to regret this as a mistake. But for me, I commend it as a great achievement … If Godzilla was the name given to the environment’s new ruler, we humanoids must attain the goal of becoming Godzilla.” This is an interesting point of view meant to undermine Haruo’s stance that Godzilla was created by human error and only the elimination of the monster can restore human dignity. But Galu-gu and the other Bilusaludo aren’t trying to become part of Godzilla or the ecosystem born from it, but to become one with the evolutionary metal the Bilusaludo created.

The Houtua are placed in opposition to the Bilusaludo’s philosophy, although it feels as if their major contribution to the story is waiting for the third installment. The Houtua communicate with the other humanoids through telepathic twin girls, Miana and Maina, and worship a god they believe Godzilla killed, but which left behind an egg. Even viewers with only a casual understanding of the Godzilla franchise will see twin telepaths talking about a god from an egg and know where this is heading. But, again, like too much so far in the animated trilogy, nothing happens with this yet. 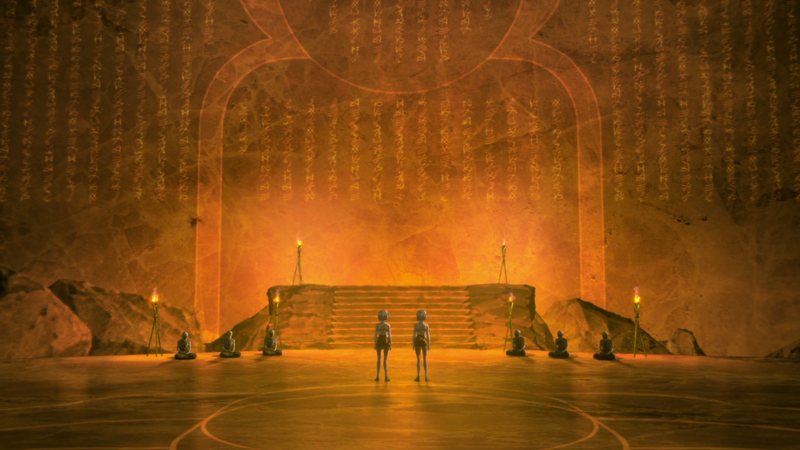 Although the thematic basis for the story is shaky, there are enough science-fiction ideas packed into the running time to keep it intriguing. But the characters are mostly mouths for these ideas, not complete characters themselves. Their designs also make them hard to separate, since everyone wears the same environmental gear and half the time have their helmets up.

Haruo Sakaki remains at the center of the story, but I still have only a basic grasp on who he is. Even when he’s told that Godzilla may be the chosen creature of Earth and the shift in the ecosystem away from humanity is irreversible, Haruo holds obstinately to his original motivation: “We must kill Godzilla!” The only change is that instead of destroying the monster to reclaim human dignity, Haruo wants to destroy Godzilla to expiate humanity’s sin in creating the monster in the first place. This is a weak excuse to have Haruo stay put while the other ground crew confront the Bilusaludo’s weird plans for using the nanometal. And the romance that springs up between Haruo and his shipmate Yuko Tani seems to exist only because they’re near the same age and she’s the only woman around. Neither character has enough behind them for this relationship to work. Yuko in particular is the least developed figure of the main characters.

Where’s Godzilla during this drama? Standing still, waiting to finally wake up and lumber into the finale. Toying with philosophies in conflict and bizarre technology can string a film along for a stretch, but at some point a Godzilla movie has to put Godzilla at the center. And here’s where City on the Edge of Battle hesitantly steps off the edge into battle, rather than leap over the abyss and plunge into battle the way you’d hope a film of such potential scope would.

When the new humanoid plan to slay Godzilla gets into motion, it turns out to be … not much different than the plan from the climax of the last movie. Drive Godzilla to a trap point where the Bilusaluado can unleash their nanometal and a big harpoon to kill it. And if you thought Mechagodzilla was going to go into action against the King of the Monsters, sorry to report that the only Mechagodzilla in sight is Mechagodzilla City. The heroes fly “Vultures” into battle, large exosuits generated from Mechagodzilla tech, but they’re generic anime battlesuits unworthy of the powerful name “Mechagodzilla.”

Although the fight against Godzilla Asu has some differences from the one against Godzilla Filius, it’s largely a flop as an action set-piece because of Godzilla’s near-immobility. The design of the monster is one of the poorest in the franchise’s history. The hardened lava look of Godzilla Filius was effective, but the supersized Godzilla Asu — at three hundred meters, almost three times the size of the largest previous version — might as well be the Rock of Gibraltar. A familiar outline, but that’s it. And it sure as hell can’t move anywhere or show any traces of a personality. It’s just a big hunk of stone. Not since Godzilla Against Mechagodzilla has the monster felt so much like an empty suit propped up on set. And that’s … bizarre for an animated Godzilla. 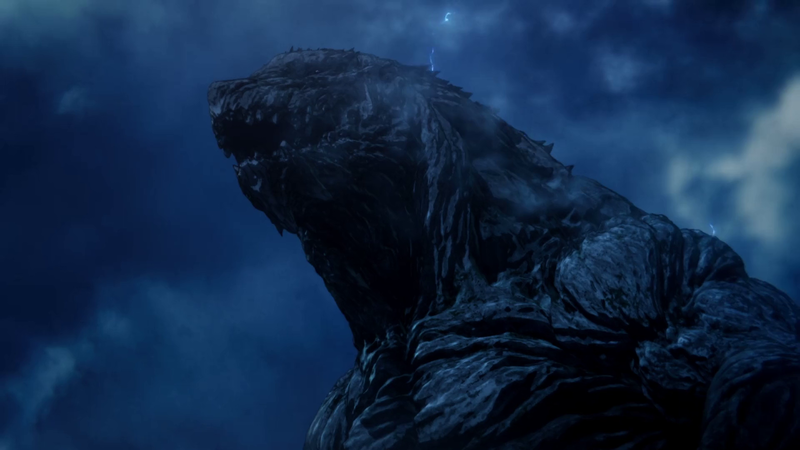 While Godzilla basically does nothing but trudge slowly toward Mechagodzilla City, the movie tries to play out the technological evolution vs. humanity conflict between Haruo and Galu-gu. The question “Will you become monsters to destroy monsters?” is the heart of the climax, developing the themes with an abrupt but satisfying twist. But as the finale for a Godzilla film, it’s a non-starter. The final moment before the credits roll is an almost literal repeat of the end of Planet of the Monsters, which left me with the feeling that nothing had been accomplished.

The post-credits teaser indicates the makers of the anime series are perhaps finally ready to unleash true monster mayhem in installment three. No Godzilla fan paying attention earlier will be shocked at the teaser’s revelation.

But will the last film go with what’s promised? I want to stay optimistic; this animated trilogy has intrigued me enough with its science-fiction ideas to keep me slightly hanging on. But it still hasn’t let loose with the potential of an animated Godzilla even as it alludes to that potential. For example, early in the movie, the crew of the Aratum calculates that Godzilla Asu is so powerful it could use its atomic ray to blast the ship out of orbit. (Godzilla taking down spaceships from the ground? That I want to see!*) But the threat never comes up again.

If you weren’t already onboard with Godzilla: Planet of the Monsters, there is little here to keep you going. If you were already interested in this new series, you’ll probably still be, while also feeling dissatisfied.

The final part of the anime trilogy, Gojira: Hoshi o Kuu Mono (“Godzilla: Planet Eater,” but the English title isn’t official yet) comes out in Japan in November, with a TBA Netflix release in 2019. My guess is it will arrive a few weeks before the May premiere of Godzilla: King of the Monsters.