Last week I received an e-mail from someone named Mark Bradley. He said he’d gotten my address from Gordon Van Gelder, publisher of The Magazine of Fantasy & Science Fiction, and that he’d recently self-published a collection of stories written by his grandmother, Mildred Clingerman, in the 50’s, 60’s and early 70’s. It contained all of the stories from her 1961 collection A Cupful of Space as well as many unpublished works.

I remember Mildred Clingerman! I’d tracked down A Cupful of Space decades ago, and her name popped up frequently in the vintage science fiction magazines I obsess over. I asked Mark for more info, and this is what he sent me.

First off, Mildred is my grandmother on my mom’s side. A few years ago I was contacted about renewing a copyright on one of Mildred’s stories from a school book company. I started rooting around on the internet and saw that Mildred still had a fairly active following. During a visit to San Diego I saw my cousin who had a stack of old F&SF magazines that I had never seen. I talked to my mom about possibly re-releasing her stories because maybe there was still a fan base. My mom had a good many stories that had never been published and sent them to me. At some point I started talking to Gordon about publishing possibilities. We went down a road with a university press that didn’t work so I looked to self publish. I put the book together, my wife did the cover art, had it printed in Austin and here we are. My mother and I participated on a panel at the World Fantasy Convention in San Antonio and the reception was very gratifying. We are very excited about the project and our hope is to re-introduce Mildred to an entirely new audience as well as give long time fans some new stories.

This is exactly the kind of project we heartily endorse here at Black Gate, and I’m delighted to have the opportunity to showcase Mark’s new book The Clingerman Files.

As the book proudly notes on the cover, Mildred Clingerman was the recipient of the Cordwainer Smith Rediscovery Award in 2014, an honor bestowed on writers deserving of renewed interest. Previous winners have included R. A. Lafferty, Edgar Pangborn, Leigh Brackett, Stanley G. Weinbaum, and Fredric Brown. 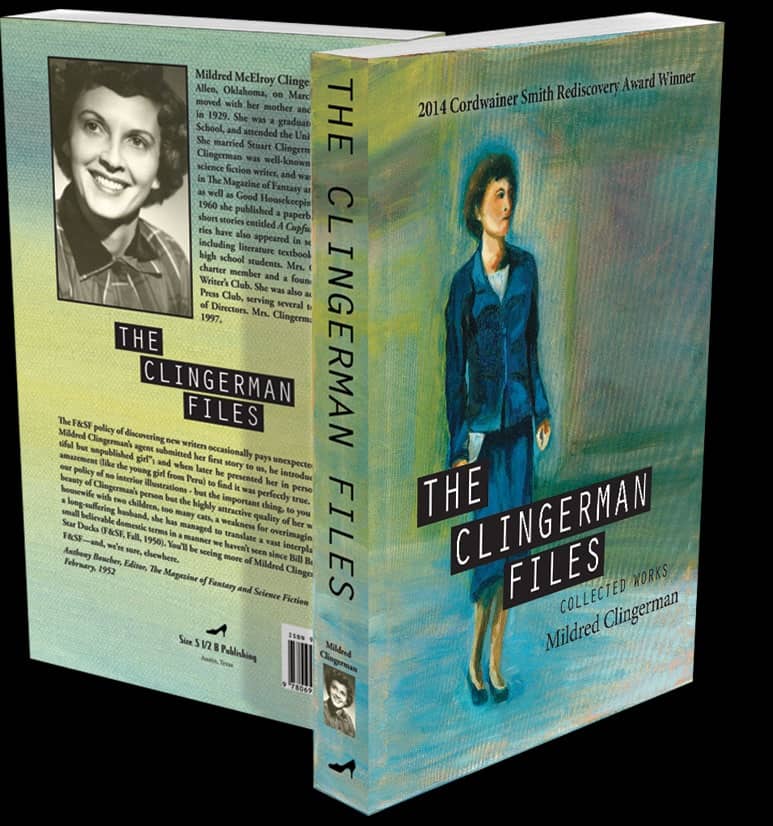 Mildred Clingerman was born on March 14, 1918. She worked at a flight-training school during World War II, and sold her first short story, “Minister Without Portfolio,” to F&SF in 1952. She followed it with some 16 more over the next two decades, chiefly to The Magazine of Fantasy & Science Fiction, but also to more upscale magazines such as Atlantic, Colliers, Good Housekeeping, and Woman’s Home Companion. She died on February 26, 1997, at the age of 78.

Her sole collection, A Cupful of Space, contained 16 stories. It was published in paperback by Ballantine in 1961 with a typically striking cover by Richard Powers and a 35 cent cover price. It has never been reprinted, and there is no digital edition. 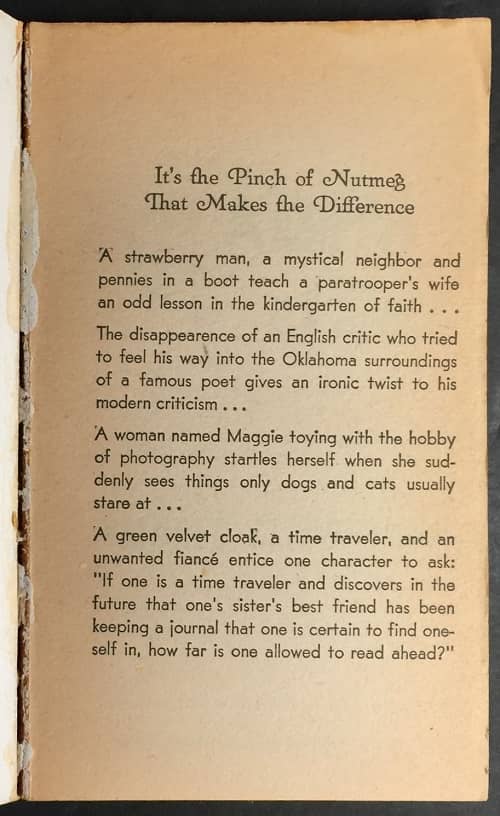 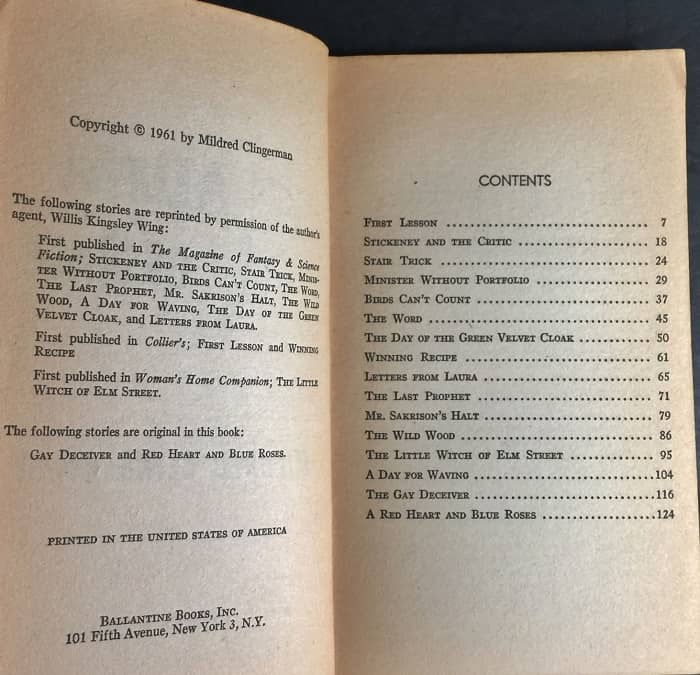 Mark has a fine description of The Clingerman Files on the excellent website he’s created to honor his grandmother. Here’s a snippet:

Clingerman’s new anthology, The Clingerman Files, includes all of her originally published stories; “The Day of the Green Velvet Cloak,” “Mr. Sakrison’s Halt,” “Wild Wood,” “The Little Witch of Elm Street” and many other favorites. Also included are previously unpublished works; “Top Hand,” “Tribal Customs,” “The Birthday Party,” “Fathers of Daughters” and many more soon to be favorites.

The key to her stories is that they appear simple and straightforward, but each takes a twist or turn that, even when you’re tempted to guess where they’re heading, they take you there in a way you would never have bargained on.

Other writers of the period tried to make big splashes. Clingerman, it seems, prided herself in concealing her effects within her masterfully constructed sentences. They barely make a ripple on the surface; all their power and drive lurk deep down below.

So many of her stories are alive with the underpinning notion that the cosmological vistas we spy at the end ends of telescopes and various other means of measurement belong to the very same universe under our feet. We’re not apart from the universe, we’re a part of it.

Nearly every story here is alive with that sensibility, in the truest sense of that word. In every sentence there is a note (a gentle one, but insistent) of silent rebellion, a surreptitious snarl, entreating you to see that not the everyday, but an undiscovered marvel.

Even more appealing for the magazine collectors in the audience, he’s assembled an eye-catching Cover Gallery displaying some of the many magazines Mildred Clingerman originally appeared in. Here’s a sample (click to see the original version):

Finally, here’s the complete Table of Contents for The Clingerman Files, with original story appearances. Those stories without attribution appear here for the first time.

The Clingerman Files was published by Size 5 1/2B Publishing on November 3, 2017. It is 288 pages, priced at $19.99 in trade paperback. There is no digital edition. The cover is by Karen Jacobs. Order copies directly here.

See all our recent coverage of the latest new SF and fantasy books here.

One for my university library to get.

A good reminder that the great age of magazine SF was made up of more than the five or six names that everyone knows.

Major Wootton – send me your mailing address and I will send you a book for your university library.

That’s very kind of you to offer, Mark!