Zach Hughes’ For Texas and Zed (1976) was one of the very first science fiction novels I ever read, at the tender age of twelve. I probably plucked it from the paperback spinner in the PX on Rockcliffe airbase in Ottawa in the fall of ’76, shortly after we arrived from Nova Scotia — the same place I bought A.E. van Vogt’s Slan a few weeks later. The description on the back of For Texas and Zed was precisely the kind of thing that would have appealed to me at the age of 12, even if I was a little vague on where Texas was, exactly.

Spacemen from Texas on Earth had settled this remote planet centuries ago. While the rest of the galaxy was being divided between two vast warring empires, Planet Texas preserved its independence, created its own unique civilization, developed its own advanced technology. But now all that Planet Texas was and all that it believed in were threatened, as the super-powers of space moved in for the kill.

I was still figuring out what science fiction was all about at the time. But even at 12, I knew For Texas and Zed wasn’t a very good novel (even if if did contain the very first sex scene I ever encountered, with a casual description of female nipples that’s still scorched into my brain four decades later). Slan proved to be a much better book, and I gladly searched out more by A.E. van Vogt. But I never read another Zach Hughes novel (though it’s possible I did furtively flip through them in book stores, on the lookout for the word “nipple.”)

“Zach Hughes” was the not-very-enigmatic pseudonym for Oklahoma writer Hugh Zachary, who had a pretty lengthy career as an novelist. His first publication was the softcore novel The World Where Sex Was Born, published by Ophelia Press under the name “Peter Kanto.” His first mainstream novel was Gwen, in Green, published in paperback by Fawcett Gold Medal in July 1974, with a sultry cover by George Ziel. 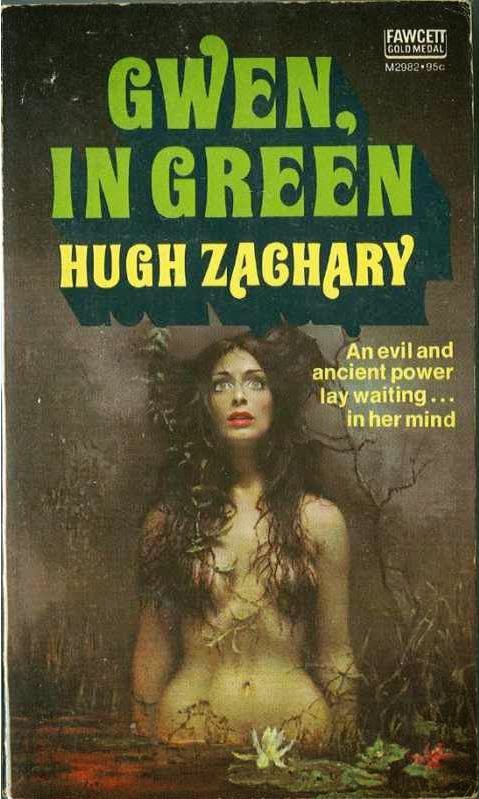 His first science fiction novel was The Legend of Miaree (Ballantine Books, 1974), and his first under the “Zach Hughes” moniker. Science fiction quickly became his home, and he published some 18 paperback novels under that name over the next two decades.

Hughes never broke out of midlist in the 70s, 80s, or 90s, and spent his entire career in paperback. Very few of his paperbacks were ever reprinted. According to Wikipedia, at least a few of his novels share a setting, in which some time in the distance past Earth suffered a nuclear apocalypse “shortly after launching a colonization fleet to settle new worlds among the stars.” I’m not sure which novels those are, but in the late 80s Signet started to re-package some of his space operas with similar covers to at least give them the appearance of a series, including Closed System.

Although I haven’t read a Zach Hughes novel since 1976, there’s no doubt that he was part of the irresistible appeal of science fiction that turned me into an SF fan for life in 1976 and 1977. Along with Isaac Asimov, A.E. van Vogt, Frank Herbert, Robert Silverberg, and eventually Star Wars, he defined what science fiction was all about, nipples and all, for my impressionable 12-year-old self. And I’m grateful to him for that.

His books have shown up in several collections I’ve purchased over the years, including this set of 39 vintage paperbacks I bought on eBay last month for $14.99, which contained his 1986 novel Closed System.

I’m tempted to give Hughes another chance, and Closed System, with its unabashed space opera setting, seems like a good place to start. It has 3.39 out of five stars on Goodreads and Steven Woodcock, the sole reviewer on Amazon, seemed to enjoy it.

This is a fine, somewhat old-fashioned throwback to the kinds of space operas that don’t see themselves written much anymore.

The story innocently enough — a man who likes the solitary trader life gets a commission that’s a bit too good to believe. He checks and checks, doesn’t find anything wrong, and proceeds with the transaction — and of course that’s when everything goes south. Along the way he is kidnapped, gets wrapped up in an interstellar conspiracy, woos a princess, and generally has to watch for death and danger at every turn.

Closed System was published by Signet Books in March 1986. It is 222 pages, priced at $2.95. The cover is uncredited, though it looks a lot like John Harris to me. It was reprinted with a redesign cover in 1987 (see above), and has now been out of print for 30 years. There is no digital edition.

I read many “Zack Hughes” SF novels in the 1970s. Hugh Zackary wrote over a dozen westerns in the 1980s, also enjoyable.

Killbird was pretty good. That would be the one I would start with.