There won’t be a review next month, due to the holidays, and most likely the month after that, since I’ll be reading for Mysterion, which will be opening to submissions in January. However, I’ll be happy to accept new book review submissions to review once I’m back. 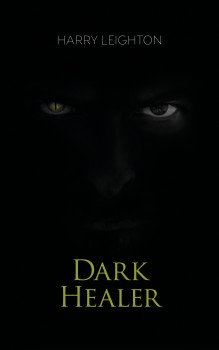 Dark Healer by Harry Leighton is one of those novels about which I felt conflicted afterward. I really enjoyed the story, and thought it worked well at drawing me in and keeping me reading. But there were significant weaknesses in the prose that interfered with my enjoyment.  I’ll get to that, but first, let’s talk about the story.

Marlen, the titular Dark Healer, is a skilled surgeon and also a mage, mixing magic with the common healing arts in order to make his patients better. Better being the key word here—he can improve eyesight, enable quicker healing, make them stronger, even add extra arms.  He’s a regular medieval Mengele, but way more successful. When bounty hunters Jonas and Alia begin tracking him, it’s because he’s begun buying people at illegal slave auctions, specifically the sick and disabled. Some he makes well so that they can serve him, others he uses as spare parts.

Jonas has a history with Marlen. At one point, they were friends, but they had a falling out right at the beginning of Marlen’s turn to a darker path. Now, living with regret for his own actions during that desperate time, Jonas is determined to make things right by hunting Marlen down. His apprentice Alia doesn’t have a personal stake, but she’s utterly devoted to her mentor and father-figure, Jonas.

Daeholf, Trimas, and Zedek are on the run. Trimas is an exiled ex-General, Daeholf a former military scout and saboteur who had a falling out with his commanders, and Zedek is an elf, hated and feared everywhere in the Empire. Their goal is to keep their heads down and survive. But when they find that Daeholf’s cousin has gone missing, and discovered a farm where the farmers are the harvest, they are also set on the trail of the healer Marlen.

When the two groups team up to take down Marlen, they find themselves embroiled in an incipient civil war, and at its core, the monsters Marlen’s created.

There’s a lot to the story, and it does a good job of weaving together disparate threads, with quite a few twists and surprises. There are, however, some issues. Some threads are wrapped up too quickly off screen (including one very important thread where we only see the aftermath), and the cast grew large and unwieldy near the end as we followed a lot of ancillary characters while the civil war played out. The ending also felt a little abrupt. Overall, however, I found the story compelling.

What I had the most trouble with were the prose issues. Some of them are merely irritating, such as the use of phrases “was stood” and “were sat”—someone was stood here,  they were sat there. This usage isn’t unknown, but outside of clearly passive usage, it’s not familiar and the correctness is at least debated, and thus it’s distracting. More troubling are the issues with dialogue. With, at times, five-way conversations, the dialogue was often confusing and hard-to-follow, and lacked the rhythm and flow it needed. Such complex dialogues are difficult to manage in prose, and some would argue best avoided. While the dialogue was often entertaining, I think the book may have benefited from cutting it down some, and letting the characters’ actions speak for them.

All that said, I enjoyed the book, and I’m glad to see that there is a sequel following Daeholf, Trimas, and Zedek on their next adventure.

Donald S. Crankshaw’s work first appeared in Black Gate in October 2012, in the short novel “A Phoenix in Darkness,” and he and his wife have recently published the anthology Mysterion: Rediscovering the Mysteries of the Christian Faith, and are now starting a Mysterion webzine. Donald lives online at www.donaldscrankshaw.com.

Is the author British? “was stood” and “was sat” are fairly common in usage over here, though I don’t know if it is accepted as proper/correct usage, it doesn’t stand out as that odd for me.

That’s a good question. I didn’t notice other Britishisms, but it’s possible. The source I found at the Oxford Dictionaries blog ranted about the improper usage, but to be fair, you expect lexicographers to be sticklers for grammar.