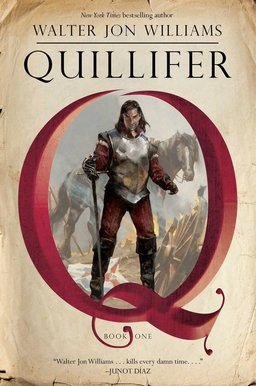 It’s been a good week for review copies here at Black Gate (see some of the recent arrivals here). But the moment Quillifer arrived, I knew it was the most significant release of the current crop, by a pretty good margin.

Quillifer, the tale of a young man forced to flee his beloved home and find his fortune among goddesses, pirates, war, and dragons, is his long-awaited foray into epic fantasy. It’s the first in an ambitious new series from one of the most respected authors in the genre.

Quillifer is young, serially in love, studying law, and living each day keenly aware that his beloved homeport of Ethlebight risks closure due to silting of the harbor. His concerns for the future become much more immediate when he returns from a summery assignation to find his city attacked by Aekoi pirates, leading to brigands in the streets and his family and friends in chains.

First, he has to survive the night. Then, he has to leave his home behind and venture forth into the wider world of Duisland, where he can find friends and allies to help avenge his losses and restore Ethlebight to glory. His determination will rock kingdoms, shatter the political structure of Duisland, and change the country forever.

Quillifer will be published by Saga Press on October 3, 2017. It is 530 pages, priced at $27.99 in hardcover and $7.99 for the digital edition. The cover is by Gregory Manchess. Learn more at Williams’ website, and read Emily Mah’s interview with the author (“Why UFOs Are Actually Made of Bread, and Other Little Known Facts”) here.

This book tempts me for one reason only. The title and book design reminds me greatly of Adam Hall’s Quiller novels from the 70s/80s and the character on the cover resembles your typical Rafael Sabatini hero. I have collected books (and comics) for sillier reasons. 🙂 (Always torn between Donald Hamilton’s Matt Helm books despising the Dean Martin movies and Quiller but freely admit Quiller is the more literate read.)

I really like Williams, but I’d think this was 4 musketeers book or something from the art.

> I really like Williams, but I’d think this was 4 musketeers book or something from the art.

Based on comments on Williams’ website, the setting for the book is “a thinly disguised version of [Tudor] Europe”… so maybe that’s deliberate?