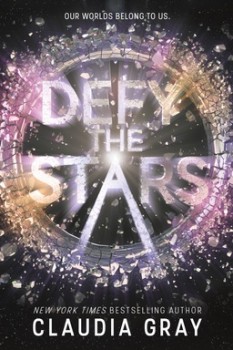 The action starts right away in New York Times bestselling author Claudia Gray’s latest novel, Defy the Stars. Teenage fighter pilot Noemi Vidal only has twenty days to live, since she has volunteered for a suicide mission to protect her world. But time runs out when evil mechs – robot warriors from Earth – burst through the intergalactic Gate and start shooting at Noemi’s squadron while they’re still training.

One of the deadly machines attacks her best friend, Esther, who was never supposed to see combat. Noemi rushes to defend her and successfully beats off the mech. Still, Esther will die if Noemi doesn’t get her medical care fast. The only prospect of first aid is an enemy starship drifting nearby, abandoned during a previous assault.

What Noemi doesn’t know is that Earth’s most advanced mech, Abel, has been trapped in that mothballed hulk, all alone, for thirty years. Docking her fighter in the ship from Earth, Noemi reactivates its systems and frees Abel, whose first priority is to kill her.

A Young Adult novel, Defy the Stars will please both young and old science fiction fans with an original, engaging, and unpredictable interstellar romp. In the universe Gray has created, Earth has degenerated into a dystopian, post-apocalyptic husk, and its citizens are desperate to immigrate to Noemi’s lush colony world, Genesis. Fearing that humanity will only repeat its past mistakes and ruin Genesis’s environment just like Earth’s, the authorities on Genesis have long sent warriors like Noemi to prevent such an influx. Accordingly, when Noemi learns it’s possible to destroy the Gate between the two star systems, she seizes the chance to do so. Acquiring the necessary tools, however, requires her not just to partner with Abel, but also to become the first Genesis citizen in generations to pass through the Gate and visit other star systems, where she witnesses the plight of others.

In addition to Noemi’s mission to destroy the Genesis Gate, her relationship with Abel drives the book forward. Love stories often take two people who are supposed to hate each other, throw them together, and turn the screws until love blooms. Gray’s version goes beyond this, taking two sworn enemies in an interstellar war and adding an even more unlikely twist: What if the protagonist’s love interest isn’t recognized as a person? What if he’s only supposed to be a machine?

While Noemi demonstrates some of the impulsiveness that commonly plagues protagonists in the YA genre, her immaturity probably isn’t pronounced enough to turn off most adult readers. Don’t be put off by early references to religion – this book isn’t preachy. One parting tip: If you haven’t watched the classic movie Casablanca (1942), it would be good to at least familiarize yourself with the ending before reading this novel.

Gray has previously published three series of YA paranormal romances, as well as two books in the Star Wars series. Little, Brown Books for Young Readers first released Defy the Stars on April 4, 2017. Currently available as a 503-page hardcover, its official list price is a modest $9.99.

To read Chapter One, point your browser here. And here’s a handy graphic on the universe of Defy the Stars, summarizing the five planet factions (click for full size version).