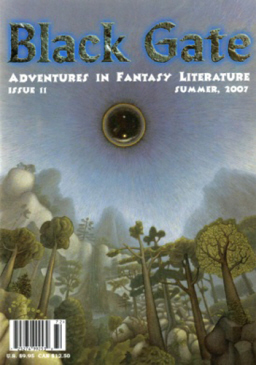 The Black Gate website was launched several months before the release of our first print issue at the World Fantasy Convention in Corpus Christi, Texas in October 2000. It was updated once a week (or so), until the site was completely revamped as a regular blog in 2007, shortly before the release of issue #11 in Summer 2007 (cover at right).

The architect of that redesign, Howard Andrew Jones, assembled a crack team of bloggers over the next few months — including Ryan Harvey, David Soyka, Mac Denier, Sue Granquist, Rich Horton, D. K. Latta, Mark Rigney, and E. E. Knight — but for the first few weeks he wrote everything himself. Including our very first blog post, on March 19, 2007, exactly ten years ago today. The title of that post was “Sword-and-Sorcery Musings,” and here’s how it started.

After mulling it over for some time, and after consultation with Black Gate Exalted Leader John O’Neill, I decided to try this whole blog thing with a first entry.

First things being first, I’m Howard Andrew Jones, Black Gate‘s Managing Editor… I know John will post here from time-to-time as well, so we’ll do our best to let visitors know which one of us is doing the writing. Herein you’ll find matters related to Black Gate, such as where we are with submissions and how soon the mag is coming out, and when new articles go live on the web site. It will also give us a chance to talk about other issues near and dear to our hearts.

I’ll have a go with one of my own favorite topics: specifically, the writing of sword-and-sorcery.

While sword-and-sorcery is a relative to high fantasy, it is a different animal. High fantasy, mostly invented by William Morris as an echo of Sir Thomas Mallory and then popularized by J.R.R. Tolkien, moves for the most part at a slow, stately, pace, meandering gently from plot point to plot point, or, as is often the case, from location to location. Movie critic Roger Ebert has some astute observations on The Lord of the Rings, which I will quote here.

There was precisely one comment on that post, a pingback from something called “The Scrolls of Lankhmar.” 8,355 blog posts and 10 years later, the Black Gate blog is stronger than ever, with a staff of 45 volunteers, and two Hugo nominations and a World Fantasy Award under our belt.

I’d like to take a moment to salute Howard for his vision all those years ago, along with those early bloggers who are still with us, especially Ryan Harvey, Sue Granquist, Rich Horton, and Mark Rigney. We owe them an enormous debt of graditude (also, a whole lot of back pay). Well done, team! Here’s to another 10 great years.

Congratulations! Here’s to many more decades!

Congratulations indeed! I have found Black Gate to be the most decent, well-mannered, civilized online community dedicated to any subject, anywhere. That’s a tribute to everyone involved – Howard, all the many writers, everyone who questions, encourages, disagrees, and debates in the comments, and you above all, John, for setting the tone. Many thanks for making Black Gate such a superior place to visit.

I check this site almost daily. Good mix of the new and the old.

Keep up the great work!

I hope for many more anniversaries like this one, and I echo the comments made above. Job well done.

Congrats, and keep up the good work!

Thanks, all. There are numerous setbacks and frustrations that go along with running a daily blog that relies on multiple pieces of technology and dozens of volunteers. But one thing’s for certain… at no point have we ever felt unappreciated! Your support and enthusiasm have kept us going.

Its been a great 10 years. I found the blog in 2008 or so and i’ve checked it several times a day, every day since.

I would assume i’m on the younger end for your readers. This blog introduced me to Conan and the rest of sword and sorcery as well as countless other modern authors.

Not to mention the board game and comics posts. which are now my favorite.

Congratulations! I try to check the site a few times a week, there’s always something new and interesting to read here!

[…] (3) ONE LUMP OR TWO? Congratulations are in order and everyone is invited to “Celebrate 10 Years of the Black Gate Blog!” […]

(A brilliant venue guys and girls)
Thanks for all your hard work and contributions…
Here’s raising a glass to the next ten years.

I echo Thomas Parker’s comment that Black Gate is “the most decent, well-mannered, civilized online community dedicated to any subject, anywhere”. I came to this site a couple of years ago and try to look it at every day. What struck me is that people on this site debate issues and don’t sling mud. I don’t like everything this site comments on – why should I? But if I am not into Cthulhu or REH, that does not mean that I am immediately felt to be a pariah. It just means I am different from some of the other contributors. That diversity is what underpins this site – that and the contributions from all of the bloggers. And John’s professional moderation. Neil

Congratulations!
10 internet years is the equivalent of 27 dog years, as I have heard!

I bought a PDF of what turned out to be the final issue of BG magazine. John O’Neill was getting ready to change what Black Gate was at the time.

I don’t really read fantasy shorts – and hardly any contemporary ones. So I am quite happy that John turned his efforts and resources to the blog, which quickly became my favorite on the web.

I’ve learned a TON of stuff from Black Gate posts and I’ve gotten to know some neat folks.

I’m all for more than another ten years of Black Gate.

I found you guys maybe two years ago, it might be a little longer back, and although I do not comment all that often, this blog has been a constant on my weekly to-read list, which I adhere to religiously. Congratulations, indeed. Here is to ten more years of awesomeness!

Being part of the Black Gate community has been one of the great pleasures of this past decade for me. Long may it wave.