If you have a book you’d like me to review, please see this post for instructions to submit. I’d love to get more submissions. 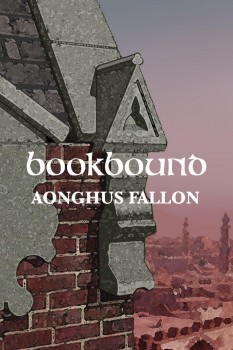 Bookbound by Aonghus Fallon is actually two stories. One is a sword and sorcery epic, “The Emperor of the Red Planet”, about a tyrant who rules his people with an iron fist, and the five people who unite to defeat him. The other story is about six school boys, including Odran, the first person narrator.

Odran is disliked and bullied at the all-boys’ school he attends, and like many such boys, he daydreams about his antagonists getting their comeuppance. And in his dead grandmother’s house, instead of the elephant figurine he’d been promised, Odran finds a copybook, and in it reads the story of Nardo. Like himself, Nardo is lonely and unhappy, but Nardo is also an heir of the line of Starnovers, the family that rules the red planet. And with the Empress’s death, he claims her talisman, an elephant figurine that allows him to control the demonic creatures behind the Starnovers’ power.

The story in the copybook grows longer with the reading, each chapter seeming to reflect Odran’s life, fulfilling his dreams in Nardo. So that when Odran’s bullies steal and damage his lunchbox, he next reads about how the now aged Emperor Nardo gets revenge on his enemies by stealing those things that are most precious to them. But Odran can’t entirely control the story, and when the five enemies unite in order to defeat Nardo, he can conceive of the obstacles they face, but the characters themselves are too real to play along. Soon Odran realizes that the reason the characters are so real is that the book seems to be stealing pieces of the people he knows, giving life to the characters in the story while removing critical pieces from the personalities of the originals. And as the five enemies in the book are growing into the heroes of a dark Sword and Sorcery story, the real life counterparts are becoming worse and worse.

There’s an interesting moral ambiguity to the story. While Nardo is a tyrant, he has been wronged. And those who wronged him may be the good guys, more or less, but they have their faults. Nor are Odran’s real life antagonists truly evil. Dempsey, for example, comes from a rough family, and his older brother is a hoodlum, but while Dempsey has a temper, he tries to do the right thing. And when the teacher misunderstands and tries to punish him, Odran conspicuously fails to defend him by telling the truth. But when a piece of Dempsey is stolen to create Suliman the Righteous, a ghul who’s turned his back on his people’s cannibalistic ways, Dempsey goes from anger-management issues to psychotic, having lost his sense of righteousness. And no one is more damaged than Fitzer, a bit of whose soul goes into the character of Peri, the most good and true of the characters in the copybook. Fitzer goes on to become the instigator of much of the real-world trouble that Odran and the others face.

Odran continues even once he realizes what the book is doing, partly out of anger at the increasingly rough treatment he’s receiving from his worsening real world antagonists, but real world alliances start to shift near the end of Bookbound, as people become more aware of what’s happening to them, and some want to stop it while others consider staying this way. Odran himself vacillates on which he wants.

The most interesting foil for Odran is Kennedy, whose alter ego Mulgar the wizard seems entirely aware that he is a character in a book, and is actually able to alter the text of the copybook. But while that might make Mulgar the most dangerous of the characters, Kennedy is not doing so well, and ends up in a mental hospital. Each time a chapter is written, for a time Kennedy actually believes that he is Mulgar.

The conclusion, when Nardo confronts his enemies, is different than you might expect, and shows growing maturity in Odran. It’s no longer clear which characters, in the copybook or in real life, are the heroes or the villains. There is satisfying growth in all of them.

Unfortunately, the ending of both stories is abrupt–the one in the copybook especially so–and I felt that the denouement of both would have benefited from playing out the consequences for the characters. I especially would have liked to see more about Kennedy, and his ability to alter the copybook, and the ramifications for Fitzer having a female alter ego.

One additional issue is that for much of the earlier part of Bookbound, while the heroes of the copybook were distinct and vivid, their real-life counterparts were less so. I especially tended to lose track of Myles, Canavan, and Kennedy, forgetting who was who and how they corresponded to the characters in the copybook. Near the end, as they changed more and more in response to their alter egos, they became more distinctive, but it would have helped if they’d been described more vividly early on.

Ultimately, I think the book accomplishes what it sets out to do, which is tell a unique story with a different sort of magic, set around a much more traditional type of story. I’m not sure I’ve read anything quite like it before. The characters grow and change in interesting and believable ways, and while the stakes are small outside of the copybook, they feel real and worthwhile. It left me wanting more.

Bookbound is available as an ebook for $0.99 at Amazon and Barnes & Noble.