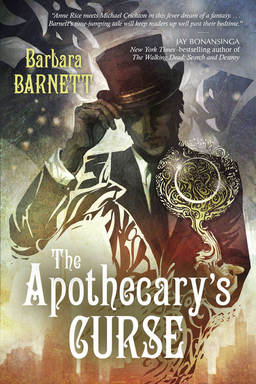 In 2016, she channeled her love for the show into her first novel The Apothecary’s Curse, which publisher Pyr describes as “Penny Dreadful meets House, M.D. in this genre-bending urban fantasy mixes alchemy and genetics as a doctor and an apothecary try to prevent a pharmaceutical company from exploiting the book that made them immortal centuries ago.” It’s an unusual take on urban fantasy to be sure, but an intriguing one. The Apothecary’s Curse is available now in trade paperback.

In Victorian London, the fates of physician Simon Bell and apothecary Gaelan Erceldoune entwine when Simon gives his wife an elixir created by Gaelan from an ancient manuscript. Meant to cure her cancer, it kills her. Suicidal, Simon swallows the remainder — only to find he cannot die. Five years later, hearing rumors of a Bedlam inmate with regenerative powers like his own, Simon is shocked to discover it’s Gaelan. The two men conceal their immortality, but the only hope of reversing their condition rests with Gaelan’s missing manuscript.

When modern-day pharmaceutical company Transdiff Genomics unearths diaries describing the torture of Bedlam inmates, the company’s scientists suspect a link between Gaelan and an unnamed inmate. Gaelan and Transdiff Genomics geneticist Anne Shawe are powerfully drawn to each other, and her family connection to his manuscript leads to a stunning revelation. Will it bring ruin or redemption?

The Apothecary’s Curse was published by Pyr on October 11, 2016. It is 345 pages, priced at $17 in trade paperback and $9.99 in digital format. The cover was designed by Jacqueline Nasso Cooke.