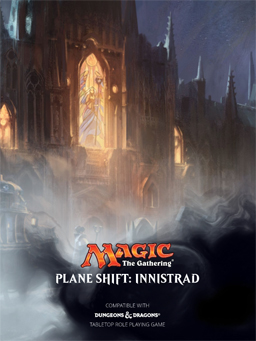 Over at Dragon+, Wizards of the Coast has published James Wyatt’s Plane Shift: Innistrad, a free pdf that introduces Dungeons & Dragons to Magic: The Gathering’s world of Gothic horror:

The starting point for this document was The Art of Magic: The Gathering—Innistrad. Consider that book to be a useful resource in creating your Innistrad campaign, but not strictly necessary. An abundance of lore about Innistrad can be found on the Magic web-site. This document is designed to help you turn the book’s adventure hooks and story seeds into a resource for your campaign with a minimum of changes to the fifth edition D&D rules.

It’s hard to determine where the snake’s head begins and its tail ends here: Innistrad was MtG’s version of D&D’s Ravenloft, which itself has gone through umpteen editions, the most recent being WotC’s Curse of Strahd hardback; and Plane Shift: Innistrad contains suggestions for moving the action of Curse of Strahd from Barovia to Innistrad.

Even though it was for a completely different game system, Innistrad’s release a few years back intrigued me because it appeared to fix two of Ravenloft’s biggest flaws. Originally the setting consisted solely of Barovia, a Slavic stand-in for Stoker’s Transylvania. A sequel to the first Ravenloft module, 1986’s The House on Gryphon Hill, introduced an English-ish parallel to the Whitby parts of Dracula; and by the time 2nd-edition AD&D rolled around, every 19th-century fiend and Hammer Horror villain from Dr. Moreau to Imhotep had his or her own realm. By trying to be all things to all players, Ravenloft became an absurd melange of times and places slammed side-by-side, where a Bronze-Age desert could share a border with a 17th-century France. No amount of handwavium — the Mists! — could polish away these incongruities, let alone its overarching derivative nature.

Innistrad fixed that by focusing on a specific Central European world of Black Forests and Alpine peaks — after all, Gothic supernatural horror was born on the shores of Lake Geneva — and tossing away the square pegs of Pharaonic mummies and Black Lagoon beasts. This, I said to myself as I paged through a gallery of Innistrad’s magnificent artwork, was what Ravenloft should have been. By bringing D&D to Innistrad, Wyatt also seems to have remedied Ravenloft’s other problem (at least during the 2nd-edition years), which was an overwhelming fixation on powerful Darklords and their cue-the-violins backstories at the expense of detailing the lands themselves or providing practical adventure hooks for PC murder hobos.

I’m glad to see Ravenloft live on, both in the Innistrad pdf and elsewhere (like in this supplement over at Dungeon Masters Guild) as I have a soft spot for the setting in my hard heart: back in the ’90s, I wrote two Ravenloft adventures for Dungeon! magazine.